I noticed three curiosities on the map:

Ideally, a map shows a snapshot of how an area looked on a certain date. But with this map, the date changes according to where you look:

The text at the bottom-left corner of the map explains the differences. It notes the map is the "3rd. Edition 1945" (show me), but that it was originally published by the War Office in 1930, and revised by the Survey Office of the Public Works Department in 1931.

So the bulk of the map reflects Hong Kong around 1930, but with ongoing updates to reflect how Hong Kong looked when the British administration returned in 1945.

Hong Kong's buildings are so tall and so densely packed it is difficult to get a feel for the shape of the land beneath them. This map can help, as it shows the land's contours, even in the built-up areas.

For example, there's a series of U-shaped contours across the hillside between High Street and First Street (show me), telling us this was originally a shallow valley running downhill between two ridges. If you go back a further 100 years to the 1845 map you can follow the streams all the way down to the shore (show me). By 1945, the streams in that High Street / First Street area have disappeared (show me), running in pipes underground. There's still a sign of them further uphill though. Three blue lines are shown running downhill to Park Road, which must be where they go into the pipes.

Most of the pre-war British administration had spent the previous 3 years and 8 months either as Prisoners or War, or interned in Stanley Camp. Those who survived til the liberation in August 1945 were in poor health, and were sent overseas to recuperate. As their replacements were new to Hong Kong, the key would have been a good addition to help them find their way around.

Here is the full key, with each building linked to its page on Gwulo. Click a building's link to see any photos / additional information we have for it.

Getting the most out of the map

There's lots you can do with this map: eg zoom in to see more detail, hide the markers, make it transparent to see the modern map underneath it, and more. To learn how, please watch the short video tutorial.

Source of this map

The original copy of this map is held at the National Library of Australia (NLA). They provide details of the map (their ID: 3033521), an online viewer, the ability to download medium-resolution JPG or high-resolution TIFF copies, and confirmation that the map is out of copyright. It would be great to see Hong Kong government's map collections offer the same facilities.

Thanks to Howard Wilson for reminding me of the NLA's collection, and pointing me towards this map.

This map is simply brilliant. I look forward to more of such maps.

By the the way archived land survey maps are more illuminating.

Glad to hear you enjoyed the

Glad to hear you enjoyed the map. The maps from 1845 and 1956 are worth a look too if you haven't seen them before.

I don't think I've seen the archived land survey maps. Please do you have a sample you can upload, or a link if there's one already online? 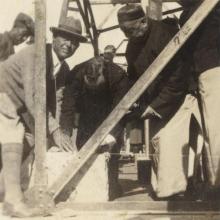