Current condition
Demolished / No longer exists
Date completed
1 Jan 1860
"The site was acquired in 1861 from Mr. Leonardo d'Almada e Castro (a prominent Portugese citizen who served in the Hong Kong Governemnt) with a mininal sum of money.

Fr Antonio Riva acted as the architect of the building. The compound was to house

The compound used to enjoy a commanding view of the harbour and Hong Kong Island as a whole. Its beauty and scale were so impressive that people from Canton and Macao rushed in to see it and many locals wanted to place their daughters in this school, as reported in a local newspaper the 'Daily Press' on June 1861."
... more at Facebook page
The remaining historical building is the "Sacred Heart Chapel" - Grade I - built 1907, recently nicely renovated.  Open to the public.

This photo is from 1981, before the other buildings were demolished.

The Convent is large, with between 400-500 inmates. We have one good-sized chapel ; also a very pretty little one for the Children of Mary. We receive as many as 1,000 babies in the course of a year ; though, of course, the greater number die after recieving Holy Baptism. It would, I am sure, make your heart ache to see the way the poor Chinese babies are treated by their most inhuman parents, who would destroy them if there were no convent to recieve them. We have in the Chinese Orphanage 120 or more children who are taught all kinds of needlework and embroidery for the church and for the ladies in the colony. Then we have also an Orphanage for Europeans and Eurasians, with more than 100 children of all ages and tongues, from the fair-haired English to the black-skinned Indian Besides this, we have a boarding-school with about fifty boarders, and a day school with 130 scholars, and we are in all thirty -two sisters ; so that you can imagine something of our work. May I beg your Community's prayers for us and our poor orphans."

Italian Convent Extension.  The Mother Superior of the Italian Convent wishes to gratefully acknowledge the following sums of money received in answers to letters sent out asking for help to pay off the remaining debt on the ‘Rosehill’ extension to the Italian Convent and for other necessaries for the winter season…” China Mail 3 Jan 1901: 2. 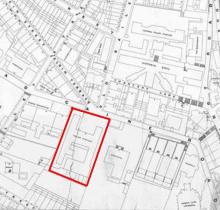 Thanks for all their information regarding the Italian Convent. As I thought it was both a school and an orphanage for children and adults. We had the same here in Ireland and I think it was something the Catholic Church did quite a lot all over the world.

Here the orphanage and home for adults was often used as a sort of workhouse where conditions were terrible and women were set to providing laundry services for their local area and thus enriching the order and paying for their keep. They and the children were not allowed to mix with the scholars and lived lives of great hardship.

All this has come to light in the last ten years or so here when records were finally released. I wonder are there any records extant for the Italian Convent? I certainly got a frosty reply when asking about them a few years ago at the school website. Maybe you have other avenues.

The Italian Convent situated on Caine Rood is perhaps the most to be admired of all the practically useful institutions in the Colony. Founded at Verona by the Marchioness Canossa in the year 1808, sand in Hong Kong, in 1860) as "The Daughters of Charity Canossean" and having for its object, the protection and education of the children {girls) of the people, regardless of creed or colour: during the past 37 years it has been the means of alleviating much distress and suffering amongst the families of the poorer classes, besides its educational efforts to implant the seeds of kindness and orderly living in the minds and dispositions of the young. Its departments are many.

There are day schools, boarding schools, native orphan schools, a foundling ward, a Catecliumenate, a home for the aged poor women; and, a special establishment for Magdalens including a hospital for the sick ; in all six separate houses in the Colony. The standard of its teaching is in every respect up to the requirements of the Government Education Department, so that, according to the success attained at the periodical examinations ,it participates in the Grant-in-aid scheme. As accomplishments— languages, music, drawing and the most beautiful of embroidery,lace and fancy needlework, arc taught. The number of its inmates is about 600 and it,  receives on an average over 1.000 foundlings every year. Visiting the sick, and occasionally nursing are also amongst its voluntary duties.

The entire establishment is managed solely by ladies of various nationality. Italians, French, German Austrian, Spanish and Portuguese, who, as the Voluntary Daughters of Charity, devote their lives to the noble work of protecting and educating the children of the poor. Its means of subsistence are for the most part from private teaching, the sale of needlework, and from the school fees,— occasionally augmented by the contribution of some generous donor, and the kind and gratuitous assistance of the Medical profession.

The institution of the Canossian sisters was founded by Magdalene, the Marchioness of Canossa at Verona, the novitiate for foreign missions being at Pavia. On February 14 1860, four sisters left Pavia for Hongkong, and on their way were joined by two others at Venice. The party arrived in Hongkong on April 12, 186o, Sister Lucia Cupis being the first Superioress. Of the six pioneer sisters, five had died at various dates in China within the first fifty years, but Rev. Mother Stella lived to a great age, being for many years in the Hongkong convent, having a fund of recollections of the early and strenuous days of the institution's inception.

The sisters opened a day school and foundling house within the first month of their arrival, at St Francis Street Wanchai which survives today. Since then the work of the society has been gradually extended, branches having not only been started in Hongkong alone, but in various other places.'

In 1880 a-school 'was opened in Bridges Street, another at Yaumati in 1887 one at Hunghom in 1889, and at Shaukiwan in 1890, the last named on ground presented by Messrs. David Sassoon and Co. The Sacred Heart School was started at West Point in 1893 being subsequently transformed into a foundling house. Other expansions, seen today in a flourishing condition have been a school at Kennedy road, St. Mary's School in Kowloon, and a Chinese school at Aberdeen while the Canossa Hospital at Peak Road is another well known activity.

The premises at Wanchai are used as a home for the poor and a home for blind girls is also operated by the Italian Mission.

During the plague epidemic in 1894 the Italian sisters nursed the patients at Kennedy Town, when one of their number, Sister Anna, fell victim to the disease while attending the Chinese patients. The sisters were commended by Government for the special service rendered by them.

A.property known as Rosehill was acquired In 1900, which enabled the convent school and orphanage to  be considerably enlarged on its present site in Caine Road 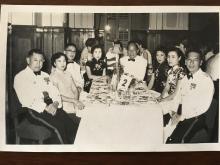