This short history of the place known in English as Hong Kong is intended, above all, to be fun to read.

It can claim no sort of historical merit – it is anecdotal, it is discursive, it relies heavily on secondary sources and whilst it does have a few dates, it is woefully short of statistics. It was written for two very different groups of friends who did not know Hong Kong but who wanted a short and readable account of its history – the first group were American and Australian and the second group were Northern Chinese, mostly Beijingers. Both encouraged me to write an account from the only perspective that I can lay claim to – that of an ordinary member of the British expatriate middle class in Hong Kong during the last quarter of the 20th century – but I have tried to illuminate the story by making use of stories and anecdotes from friends who have, or had, a different perspective where possible. Where I quote someone who is no longer with us I give their name in full and where I quote someone who is still alive I abbreviate their name.

I chose to start with Alexander Dalrymple’s visit to Macau, rather than at any other point, because it was with Dalrymple’s visit that the idea of a foreign trading settlement on the coast of China, using Hong Kong's harbour, the best in China, may be said to have begun.

One general point deserves emphasis – the great attraction of Hong Kong was the harbour, which, formed as a strait between a rocky island and the mainland, had three great advantages. Firstly, since the harbour has two entrances, it was possible for a sailing ship to enter or leave Hong Kong regardless of the direction of the wind. Second, because no river runs through it, it is not subject to silting up, unlike all the river estuaries of China. Lastly, because of the height of the surrounding land, the narrow entrances and the good quality of the sea bed, Hong Kong offers ships good shelter from typhoons. Only in recent years have deep sea merchant ships outgrown Hong Kong Harbour.

Any account of Hong Kong that, perhaps through concentrating on the difference of cultures, the rise and fall of empires, and so on, misses this point, misses almost the whole point.

Of course, when Dalrymple arrived, China was not interested in harbours - had not been interested in them for hundreds of years, since the reign of the Jongle Emperor of Ming, so the benefits of Hong Kong as a harbour were of no concern to the Imperial Government. Today, things could hardly be more different, with China more open to the world than at any time since the Tang, and operating a huge deep sea trading merchant fleet. Hong Kong played a part in that story, too, but I have not covered it here.

I have chosen to stop in  July 1997, not because Hong Kong's history stopped then (I would have liked to cover, at least, the response to the Asian Financial Crisis of 1997) but because this site is concerned with Old Hong Kong, and, even in Hong Kong, thirteen years is not very old!

I hope people will not hesitate to correct errors. 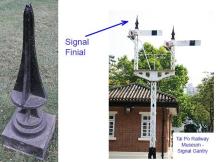