"The School was originally an orphanage in the name of “Le Calvaire” operated under “Sisters of St. Paul de Chartres”. It was completed in late 1907 and opened on 6 January 1908 by the then Governor, Sir Frederick Lugard accompanied by Bishop Pozzoni. During the Japanese Occupation, the site was once used as a police station and a jail.

In 1946, the orphanage ceased to operate and the building was used as a primary school from then on. The present name of the School, St. Paul’s Primary Catholic School, was adopted in 1960. It was accorded a Grade 2 status by the Antiquities Advisory Board in 1992 and is currently a proposed Grade 2 Historic Building under the assessment exercise of 1,444 historic buildings."
http://www.amo.gov.hk/form/150meeting/AAB150-55-Main.pdf 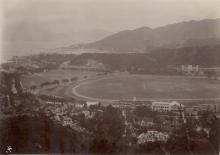 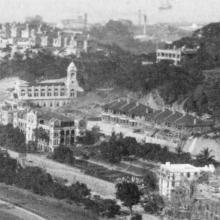 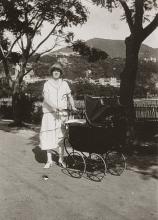 There are full details of its history, including photos and original architectural drawings from Leigh and Orange in the Heritage Imact Assessment here:
http://www.amo.gov.hk/form/St_Paul_HIA_report.pdf

The document says the site was used as a Chinese cemetary before the govt gave the plot (inland lot 1698)  to the Sisters of St Paul de Chartres in 1903.

The convent in Happy Valley, named Le Calvaire, was certainly a Japanese gendarmerie. My father was held in the cells there, and Sir Vandeleur Grayburn was a cell-mate briefly before he was removed to Stanley Gaol where he died. He received food parcels from his wife, and kindly shared them with my father. Also held there at the same time was C.M.Faure, before being removed to Stanley Internment Camp.

I think the name "Le Calvaire" is still etched on the school entrance on Wong Nei Chong Road.

Here are the two entrances Moddsey mentions. They're blocked up now, but the engraving "Le Calvaire" is visible in the stone lintel over each entrance:

Mr Ching, I am an old girl fr Sppcs.  Would really want to know more about our school during the war period.  As i notice there are a few cell on the G/F, the cell beds were still in them even they were used as storage rooms in the 80's.

Looking fw to your reply.

Hi Zerlina, You can find some mentions of this building in the war period if you click the "What links here" tab above, and then follow the links there.

Please do you know if there is any sign of the cells remaining today, or if any photos exist that show how they used to look?

Wartime conditions in the Japanese Gendarmerie in Happy Valley

Thanks to Henry Ching for this extra detail:

According to my father’s notes, the prisoners were not supplied with beds. They slept on the floor, on loose palliases ((straw-filled mattresses)). As inmates left, their palliases would be taken over by those remaining who thereby managed to accumulate several and were thus in relative comfort. Newcomers, including my father, had to sleep on the bare concrete floor as no new palliases were issued.

There were four cells. Cells 1 to 3 were ranged along the eastern side of the building below ground, and thus had no natural light. They were small cells with about 10 men in each. Cell 4 was opposite and was a large cell along the western side of the building, separated from the other three cells by a corridor. It held over 30 men and women. On the outside of Cell 4, and separated from it by a wall, was an enclosed verandah. But grills in the upper part of the wall enabled sunlight to enter the cell, and it was possible to look out towards the Yeung Wo Hospital on the other side of the Valley.

My father’s description on arrival follows: “On both sides (of the corridor) heavy wooden bars four inches wide by one and a half inches. Have feeling of being in ship’s hold. Much noise of chattering but can’t see the people. Also terrific smell. Realise people are behind those bars. Small door on one side opened and I stoop in. Smell is terrible, but I am relieved. I am not going to be alone. Omar greeted me from Cell 3 across the corridor, and Faure from Cell 1. Then Tubby Arculli in Cell 3 and finally leaning against door post shabby and dispirited was Bill Sling.........Cell 4 in which I was put has verandah on north side – cloisters........Only half cell inhabitable. Sanitary arrangements. Half dozen wooden buckets. Store room at end.”

Sorry it took me two years to reply.  I didn’t get any notification.

Thank you for all these info from your father.  The current long stairs entrance to the school was built by the Japanese when they occupied the building during the war.  The side doors, which were marked with our building name was the original entrance to the building.  According to the sisters there were two roads leading up to the main entrance.  There are two rooms can be clearly seen from the western ground floor of the building, it can be mistaken as the basement.  Ventris Road is our back door and that level is our 1st floor.  I will study what you describe, coz our current understanding is that the cells were in the southern wing above ground which is in a totally different location.  Will keep you posted.

The original building is described on www.amo.gov.hk/form/St_Paul_HIA_report.pdf as a ”three storey building with a basement level on the western side”. Zerlina may be interested in reading that report if she has not already done so.

The history of the institution goes right back to 1848, when a party of French sisters, arrived in Hongkong and established, in a small building in Wanchai, close to the then fashionable Spring Gardens quarter, the Asile de la Sainte Enfance, which as its name implies was mainly intended for the rescue and succour of the small children of the place.

The hospice known as Le Calvaire was about to be constructed at Happy Valley. We have seen that there was an appeal for funds for this purpose in 1906 and two years later the aim was accomplished.

In January, 1908, the S.C.M. Post notes that H. E. the Governor, Sir Frederick Lugard, would formally open the new building erected at Wongneicheong for the Asile de la Sainte Enfance. This handsome structure states the paper  has been built on a piece of ground on the east side of the Race Course. The land was granted by Government about four years ago. The new premises will greatly assist the Mother Superior and Sisters in their work of caring for abandoned Chinese babies, and the building will be used as a hospital. The site is a very pretty one, and overlooks the course. The style of architecture adopted by the architects ( Messrs. Leigh and Orange ) is early English gothic. The building is of fireproof construction, and cement with tiled floors...... There is a large area of ground, and the whole has been enclosed by a substantial granite wall. The children will have a spacious playground, and the Sisters are making provision for a nice flower garden* In the centre of the ground is a handsome monument in the form of a crucifix erected in the memory of Bishop Piazzoli, .who was Roman Catholic Bishop here when the Sisters first took steps to procure the new building

The actual opening ceremony is described in the S. C. M. Post of January 7, 1908, as follows:- yesterday afternoon the new hospital of the Asile de la St. Enfance erected at Happy Valley was formally declared open by His Excellency the Governor, .Sir Frederick Lugard,was accompanied by Lady Lugard, and attended by Captain Taylor, A.D.G., and Mr. Brackenbury, private secretary. The Governor's party was received by Bishop Pozzoni. Among those present were Father Rovert,. Procurator of the French Catholic Missions; Father Maria, pro-vicar of the Italian Mission ; and many members of the clergy and Christian Brotherhood, Consul Romano, Dr S. Clark  Mr. J Orange, Dr, and Mrs Justi, ;Mrs, Marty, Mrs.Leiria, Mrs. Ho Tung and others

It was eight years later that the main institution moved to Causeway Bay district, and the good work could go on unhampered by lack of space. The old convent building at Wanchai was subsequently "pulled down it stood next door to, and eastward off the Seamen's Institute,

A portion of the new building  largely adapted from an existing structure - a cotton-spinning factory'- by -means of extensive alterations and additions-) was formally opened by the wife of the Governor, Lady May, in October. 1915, and consisted of the Orphanage, It was decided to mark the occasion as the actual opening of the institution, and for this reason there was set in the wall, just by the entrance a commemorative stone bearing the inscription ~ St. Paul’s Institution, Opened by Lady May, 6th October, 1915 "'.

The premises, it might be explained here, had originally been used as a cotton mill by Jardine Matheson and Co., The firm of Ewo had already opened a similar factory in Shanghai, which had proved successful so in August, 1897, the Hongkong concern was floated as a company and began work with bright prospects, Some years later, Jardines decided to close the factory at Causeway Bay, and the machinery was shipped north for the mill at Shanghai. Thus the commodious Hongkong, premises became vacant, and the French Mission saw in them a building, in a good situation, which could readily be adapted for the purposes of the convent, and hospital Thus the well-known St. Paul’s Hospital today actually occupies for its comfortable wards the old coolie quarters of the cotton mill, reconstructed to suit the new purpose to which the building was to be put.