Only three areas show any significant signs of development: several blocks around Yau Ma Tei (show me), the Kowloon Wharves (show me), and the dockyards at Hung Hom (show me).

Tsim Sha Tsui (TST) is well developed as far as roads go (show me). But though the road layout looks similar to a modern map of the area, it was only sparsely built on. Where there is a building in TST, it tends to be in the middle of a large plot of land, adding to the empty feeling of the area.

There are other villages scattered across the peninsula. Some have familiar names - Mong Kok, Ho Mun Tin and To Kwa Wan are easy to recognise. But how about San Shan (show me), Hau Pui Loong (show me), or Fo Pang (show me)? I haven't heard of those before, but did find traces of one of them on a modern map: today's San Shan Road isn't far from the old San Shan village.

In addition to TST's familiar road layout, you'll also find many familiar road names - except they seem to be on the wrong side of the harbour. A short walk through TST would take you along Chater Road, crossing Garden Road to reach Robinson Road (show me). It feels obvious now that having the same names for roads on both sides of the harbour would cause confusion, so it's hard to imagine why they were used. Perhaps in the days before regular ferries, TST seemed so remote that it wouldn't matter?

Later on they saw sense, and in 1909 the TST roads were re-named.

Does the map give any clues about where the people worked?

We've already noted the two main employers, the wharves and the dockyard. The other businesses that were large enough to be marked on the map are:

Another employer was the government, with their buildings conveniently shown in pink. Working clockwise around the map we see:

The title of the map reads "Water Supply, Kowloon Peninsula", and so many of the features marked - service reservoirs, dams, water mains, etc. - are related to that supply.

One surprise to me is that the central area of the peninsula is within a dotted line marked "Boundary of catchment area" (show me), suggesting this is where Kowloon's drinking water came from. The streams from the hills in the catchment area flow downhill and join up to form rivers marked in blue on the map. Those rivers finally run into the sea at two locations (show me).

One part of the water supply that can still be seen today is the old pumping station (show me), next to where the "Waterloo Road" river met the sea. It's job was to pump water from the river eastwards and uphill to the service reservoir (show me), on top of the hill where today's King's Park stands.

Here's how the pumping station looked around the time the map was drawn:

In 1896, power means gas, as Kowloon didn't yet have any electricity supplies. The gas works is shown at the southern end of Yau Ma Tei, facing on to Jordan Road (show me).

I've recently been reading Nigel Cameron's book, Power, about the history of China Light & Power. Their first power station in Kowloon began producing electricity in 1903, just seven years after this map was drawn. The book describes the founders' optimism, and their confidence that Kowloon would grow in time, and would eventually outstrip Hong Kong island given the much larger area of land that was available. Looking at Kowloon in 1896, it's hard to see where this confidence came from. But they were proved right.

The last group of sites are those belonging to the army & navy, coloured blue on the map.

When Britain acquired Kowloon in 1860, the armed forces thought they should be allowed to use this new land. The UK National Archives have several grand plans for the new military facilities they would build. As the 1896 map shows, those grand plans weren't put into action, so the main facilities for the army & navy remained on Hong Kong island.

The navy's only buildings in Kowloon are in the small Naval Yard (show me), just north of the Kowloon Wharves.

Across the road from the Naval Yard is a much larger area for the army marked "War Department Land" (show me). It was later known as the Whitfield Barracks, and later still became today's Kowloon Park. Down at the bottom-right corner of that land is a building marked in the non-military grey colour (show me). That was the mosque, as many of the soldiers in this camp were Muslim men from British India.

A second, much smaller area marked "War Department Land" is the hill at the southeast corner of TST (show me). The map shows it was home to the Signalling Station, which gives the area its current name, Signal Hill.

The last army site shown on the map is the East Battery, up on the hills behind the dockyards at Hung Hom (show me). Unfortunately the map doesn't extend far enough east to show us any of the details of the battery and its buildings. As the name suggests, there was also a West Battery in Kowloon. It was situated inside the War Department Land shown earlier, though curiously it isn't mentioned on the map. West Battery's gun emplacements still exist, and can be seen in Kowloon Park.

Today we'd see expect to see the army's Gun Club Hill Barracks shown at the junction of Austin and Chatham Roads. There's no sign of them on the 1896 map, but instead we can see three rifle ranges in that area (show me), which are the likely source of the Barracks' name.

If you enjoyed this and would like to see another annotated map, you can jump ahead 60 years to the 1956 map of Kowloon.

It's also worth reading the guide to using maps on Gwulo, to get the most out of them.

The original map is held at the UK's National Archives. Their record:

The valley once hosted a village and a river ran to Ma Tau Kok and emptied into Kowloon Bay. The valley was mainly cultivated areas.

There was a cemetery, Hau Pui Loong Cemetery, of 19 acres (7.7 ha) in the area. Part of it was a Plague Trench (疫症墳場) for the bodies of those killed by the bubonic plaguebetween 1894 and 1901. Established in 1913, the cemetery was finally removed in 1948.[citation needed]

New Asia College, one of three founding colleges of the Chinese University of Hong Kong, was located near Tin Kwong Road and Farm Road.

As to Fo Pang village, perhaps it is under the Wylie Road football pitch?

Thanks Guy, that's good to know. The Kau and Hau don't sound similar, but a capital K can easily be mistaken for an H and vice-versa. So I wonder if it there was a copying error by a map-maker at some time that led to those two versions being used?

You're right that Fo Pang is the Wylie Road football pitch but the modern building on the old Hung Hom Police Station site is Ka Yee Lau. The easy way to check is to play with the slider about one-third the way down the right side of the map, as it makes the overlay transparent. Here's how it looks at the 50-50 setting, showing the Police Station over the Ka Yee Lau: 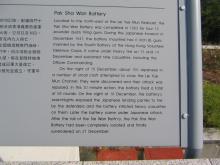