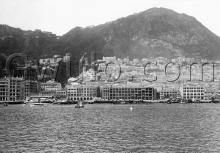 Dates from HK Land via Annelise.

Here's the approximate location of the building as it appears on a 1911 map (Plate 3-4, Mapping Hong Kong):

Both Buildings completed in 1905

Palmer and Turner were the architects

The Phoenix-Club started many years ago in what was known as the Hole in the Wall. Its members included many old and respected members of the community some of them are now numbered with the great majority, others have left the Colony for the homeland, When the German Club left the commodious premises they had occupied for many years in Wyndham Street, for the Phoenix Club entered into possession, the position of the club being at that time a flourishing one. Unfortunately defalcations on the part of employees on more than one occasion had a depressing effect, but the members nevertheless clung together. The removal to new premises was forced upon the club at the close of its lease by an unexpected demand for more rent, and the subsequent letting of the place to the Nippon club. It must therefore be gratifying to the creditors of the club  that the members have so unanimously and magnanimously shouldered the responsibilities and the likelihood is that ere long, in the premises which have now been acquired, the club will free itself from the manacles of debt, and once more become the prosperous Institution it deserves to be for it fills a gap in the social life of the Colony in bringing many together, especially captains and others in widely varied walks of life, who would otherwise have no opportunity of meeting.

When the Hongkong Club left its old premises at the bottom of Wndham Street where the King's Theatre is to-day in 1897, those premises were bought by A. S. Watson & Co. and let for some time. The New Club, as it was named, which was a residential club, was formed in that year( 1897.), and took quarters in the former Hongkong Club building. The membership might be noted, and were mostly master mariners and throughout its existence the club membership was largely composed of the captains of vessels trading here, the others comprising men of the mercantile community.

After a little while, however, the New Club was wound up as the premises were sold by Watson's ( in October 1898 ) and it was reorganised into a Bowling Club, which took over the Hongkong Club’s former bowling alley in Wyndham Street, at the back of the old premises (later the Coronet Theatre, and since pulled down and builtover) The Morning Post Building now abuts on this site. When the Club Gemania moved to Kennedy Road, at the end of 1902, the German Institution's premises in Wyndham Street (at the end of the present On Lan Street) became vacant, and in 1903, the Bowling Club went into these fresh premises, using the bowling alley existing there. It was re-constituted with the appropriate name of the Phoenix Club about 1908, Defalcations by employees had,resulted in a temporary setback but, as we have seen above, there was a revival, and the club moved to King's Building on the seafront in 1910.

There it remained and entity until it was wound up in 1925, and its rooms were taken over by its next door neighbours, the Institution of Engineers and Shipbuilders.

It was the big strike of 1925 which led to the closing down of the Phoenix Club the effects of that upheaval sadly depleted its membership and finances. Mr. Tarrant had the satisfaction of giving it an honourable burial, guiding its destinies to the end, when towards the close of that year it was bought up at its full book value by the Institution of Engineers and Shipbuilders whose reading room, ladies room and refreshment rooms now occupy the old club's premises.