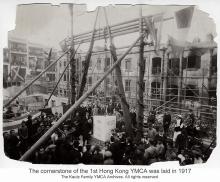 Here's some more info from the AMO assessment. (In this case they propose to downgrade its current Grade II status to Grade I).

The Chinese YMCA of Hong Kong Central Building (香港中華基督教青 年會中央會所) was built in 1918 with funds donated by Chicago YMCA members as well as locally raised donations. The architects were Stattuck and Hussey also of Chicago. The construction of this six-storied redbrick building commenced in 1915 and its foundation stone was laid by the Bishop of Victoria, Right Rev. C.H. Lander D.D. (聖公會會督倫義華博士) on 10 February 1917. The building was completed and officially opened by Hon. Claud Severn, C.M.G. (施勳護督) in 1918. The premises was well-equipped with modern facilities at that time, including the first indoor swimming pool in Hong Kong and sports playground with a jogging track.

The building was used as the headquarters of the Chinese YMCA of Hong Kong until 1966 when they moved to new premises in Waterloo Road, Kowloon. The notable Chinese writer Lu Hsun (魯迅) once lectured in the building in 1927. During the Battle of Hong Kong in 1941, the building was used as the headquarters of Hong Kong’s Air Raid Precaution (ARP) (Section A of Mid-level) (防空救護隊半山區A 段總站) which served thousands of refugees. During the period of Japanese Occupation (1941-1945), YMCA was under the control of the Education Department of the Japanese Government and offered Japanese and German Courses. The old building is now a sheltered workshop and hostel for the mentally handicapped. A part of the building is still used by the YMCA as a Youth Service Centre.

The architectural style of the building is classed as Eclectic combining Western neo-classical and Chinese vernacular elements. The building is a large rectangular six-storey high block of symmetrical design built largely of red bricks. Its austere utilitarian appearance, particularly the rear elevation, with the repetitions use of identical fenestration for storeys of similar plan demonstrating functional expression and directness is characteristic of the Chicago School architectural style. However, the front elevation displays Neo-Classical features such as arches, keystones and Tuscan columns as well as Chinese features such as green glazed tiled roofs to the porches, although these features are used in a restrained manner. Internally there is further use of Western classical style features.

The Eclectic architectural style and Chicago School influence is very rare in Hong Kong and the building should be considered as a valuable piece of built heritage. Externally, at least the building has retained its authenticity.

The social value of the building lies in its role in contributing to religion, education, sports and mental health care. As a significant piece of architecture and because of its historical background, it is of considerable local interest, and it is one of the buildings forming the Central and Western Heritage Trail.

The building is important as an integral component of a significant architectural and historical complex. Physically close to the declared monument of Old Pathological Institute (舊病理學院) (1906, currently the Hong Kong Museum of Medical Sciences 香港醫學博物館) and Man Mo Temple (文武 廟) (1847), it is one of the historic buildings forming the Central and Western Heritage Trail (中西區文物徑).

The various uses to which the building has been put in the past prove that it can be converted if need be for adaptive re-use.

Remarks: In view of its historical and architectural merit, the Chinese YMCA of Hong Kong Central Building was accorded a Grade II status by the Antiquities Advisory Board in 1979. 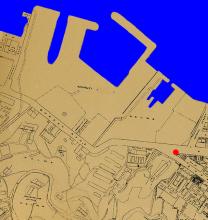