I had a triple-helping of history on Saturday, starting at 10am with a guided tour of ...

The Museum of Coastal Defence (MCD)

The museum has been closed since 2018 for a major revamp, only re-opening a few weeks ago. I was a bit apprehensive about what we'd see - 2023 Hong Kong is a very different place from 2018 Hong Kong, so how had the museum been affected?

The museum is really two in one: outdoors focuses on the history of the physical site, then indoors are the exhibitions introducing Hong Kong's broader military history.

The British army used the site from the 1880s through to the 1950s, and many of their buildings have survived. The old buildings are mostly accessible to visitors, so there is lots to explore. It's also a beautiful location, with views west into Victoria harbour, north across to Lei Yue Mun, and east out to the harbour entrance.

There are clear information panels at each of the points of interest. Here are a couple of examples: 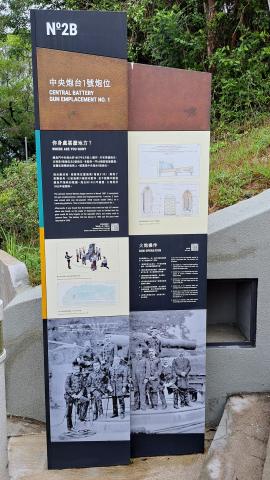 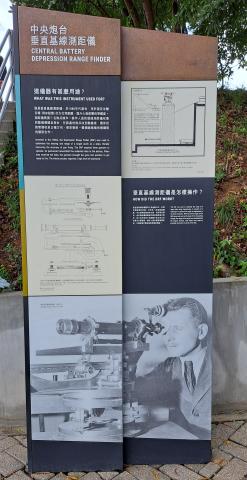 They show more detail than I remember seeing on the old panels. If you'd like even more information you'll notice the new displays also have QR codes that you can scan to watch animations of how the different equipment worked.

At the top of the hill we went in to the redoubt to visit the exhibition galleries.

The information shown outdoors is dictated by the site, e.g. the panel next to a gun emplacement will talk about the guns that were installed there and the shells they fired. But the indoors area was a blank canvas - what topics had the museum chosen to show, and how would they interpret the subjects?

I'd worried that the MCD would become a museum about the Opium War, East River Brigade, the PLA, and little else. I'm happy to say that isn't the case. Each of those topics is covered, and rightly so, but if we take the WW2 resistance as an example, there are displays on both the East River Brigade and the British Army Aid Group (BAAG).

The redoubt's 11 galleries are divided as follows:

It's good to see the new exhibits put a stronger emphasis on the non-British soldiers who were based in Hong Kong. We learn about the Indian and Gurkha soldiers who were stationed here, the mix of nationalities in The Volunteers, and the local Chinese who worked in a variety of roles in the British Armed Forces. There also several displays that look at how the British Armed Forces and local residents interacted. 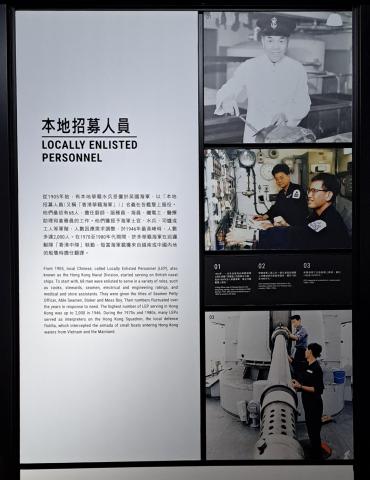 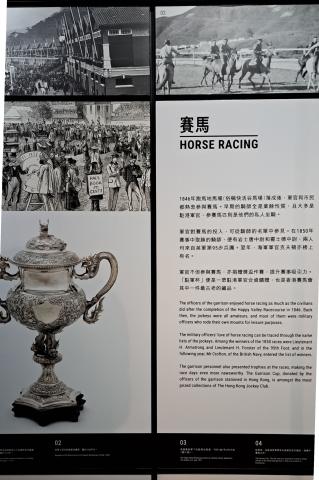 The curators have packed a lot of valuable material into each gallery, not just the written information but photographs, other paper ephemera, and historic items that illustrate that gallery's theme. In each case there was lots of information that was new to me. There are also touch-screen displays that let the visitor explore even more information.

I had to leave after around two and a half hours, but there was still much more that I hadn't seen, so allow plenty of time for your visit or consider making several shorter visits.

Well done to everyone who was involved with this update to the Museum. "You can't please all of the people all of the time" surely applies to museum curation, but the displays are a well-balanced introduction to Hong Kong's military history, giving a valuable record of both the technical history of the site, and the melting-pot of nationalities and experiences that make's Hong Kong's colonial history so unique.

Next, let's see the museum get the promotion it deserves. I heard Singapore's Battle Box and Fort Siloso mentioned several times on the tour, and I remember seeing them advertised in handout leaflets as I arrived at Singapore's Changi Airport. Can MCD get similar treatment at Chek Lap Kok?

Thank you to OMRS (Orders & Medals Research Society HK Branch) for arranging the tour, and for Dr Kwong Chi Man for leading us around the site. Chi Man is one of the Military History advisors to the museum, and was deeply involved in the revamp, so we couldn't have had a better guide.

After leaving the MCD I hopped on the MTR to Central, grabbed a quick sandwich and then went up to ...

Patricia O'Sullivan gave this talk in Tai Kwun, as the final event in their Gender Salon series. Patricia drew on the research for her second book, Women, Crime and the Courts: Hong Kong 1841-1941, to share stories of the women who worked in, or were imprisoned in, the Gaol. After the talk there was a discussion with the audience.

Patricia has strong family ties to Tai Kwun, as several of her relatives served as policemen in the Central Police Station during the late 19th- and early 20th-centuries. After the talk she posed in front of this 1937 photo showing one of her more distant relatives at their leaving do. 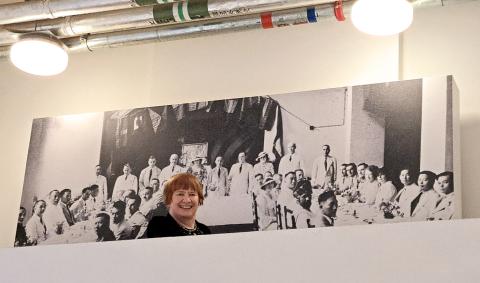 In a satisfying link between past and present, the old photo was taken in what had been the Central Police Station's gymnasium. The gym has become Tai Kwun's Duplex Studio, the same venue where Patricia gave her talk and posed for the photo above.

The Duplex Studio was also the site of the Gender & Space exhibition:

Gender & Space adopts a gender lens to revisit the history of our heritage site over its first hundred years from 1841 to 1941. It seeks to redress the underrepresentation of women in the gendered spaces of the Central Police Station compound by sharing the stories and experiences of those often overlooked to fill a gap in its history.

I was very lucky to have the chance to join a tour of the exhibition, led by one of its curators, Senia Tong.

When I was searching for photos of this site for Crime, Justice and Punishment in Colonial Hong Kong, it was hard to find photos taken of the the people who worked there, and I never did find any of the matrons who ran the women's prison. The exhibition highlighted the lack of women in the photographic record by displaying an old photo of male prison guards next to a plain text list of the matrons' names.

In other areas the exhibition showed many interesting photos I hadn't seen before, including an example of the identity card that prostitutes were required to keep. The photographer's name was clearly shown on the card: A Fong. I normally associate his name with large, scenic, albumen photos, but getting the contract to be photographer for the prostitutes' ID cards must also have been welcome as a steady source of work.

Both the MCD and Tai Kwun are large sites by Hong Kong's standards, and reward time spent wandering around. We're forecast a spell of cool, dry weather, perfect for a bit of wandering! 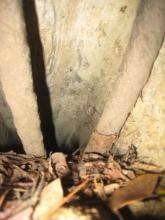