A Mountain of Light

Austin Coates was engaged in the 1970s to write a history of the Hong Kong Electric Company. He credits Raymond Smith, a former engineer who had served the company for many years, with providing lots of useful information to 'feed the book'.

Below is an extract from his account of the 1937 typhoon:

The major typhoon of 1937 was remembered at North Point for one of those pieces of one-up-manship irresistible to engineers. Raymond Smith: ‘Some time prior to the typhoon an anemometer was ordered from home, to be calibrated up to 150 m.p.h. The supplying company wrote back and said that 150 m.p.h. was unnecessary, and that their standard instrument was 100 m.p.h., and they thought that would be sufficient. The Hong Kong Electric Company insisted on 150 m.p.h., and this was eventually supplied.

‘In the 1937 typhoon the pen on the anemometer went off the scale, but by measurement it was estimated that that the wind force was 166.6 m.p.h., and this figure was accepted by the Observatory, whose anemometer did not go up to 150 m.p.h. They were so peeved about it that they ordered an anemometer up to a maximum of 200 m.p.h.’

I had previously read up the 1937 Typhoon. A brief extract below from the front page of the China Mail dated 2 September 1937 of the typhoon's wind speed and the reference to the Hong Kong Electric Company.

All wind velocity records were broken by the typhoon which struck with devastating effect this morning. The utmost which the Observatory's instruments can register is 130 miles an hour.

Mr. A. C. Jeffreys (sic), the Director (of the Observatory), told the "China Mail" that he estimated the velocity of certain gusts at 150 miles an hour, and a reading taking on an instrument at the Hong Kong Electric installation at North Point showed one gust of 160 m.p.h.. 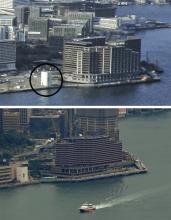