Catherine Joyce Symons writes her memories of it in the 1920s in her memoir, "Looking at the Stars":

The grandest house we visited regularly belonged to millionaire Choa Po-sien and his wife, who had 12 children. They had an immaculately kept grass tennis-court at the top of the drive, below their front garden which featured flower beds and enormous trees. An impressive flight of granite steps led up to a wide verandah which stretched across the entire frontage of the house, while the interior, with its spacious, lavishly furnished rooms, oozed with the feeling of opulence.

Our ties with the family were quite close: Mother was particularly friendly with Gertie, the eldest daughter; Robert, the eldest son, was also Mother's godson (Chinese style). My own particular favourite was Josephine, the eighth child; Marjorie's favourite was Margaret, the 11th, and Derek's was Andrew, the youngest. Once a month, and on special festival days, we would tackle the tortuous route up to 5 Broadwood Road, above Happy Valley. Gertie owned an Austin Seven, but we would have to take sedan chairs up from the tram station near St Margaret’s Roman Catholic church, on Ventris Road.

Whenever we visited we would greet the adults politely, but impatiently, before dashing off to play around the house. Sometimes we played "Bobbies and Thieves", in and out of the front door, or the back door that led to a huge vegetable and flower garden.

Tea was always delicious at their house - and a typical Hong Kong medley of East and West - chow mein (fried noodles), rich cream cakes and sandwiches. Once I remember that Josephine and I ran down to tea, even before the bell was rung, and found an enormous rat dragging a strawberry tart to the edge of the table. I screamed, whereupon the frightened rat shot away leaving his booty behind. Later, I was given a tart as a reward, but the little servant girl who had forgotten to stand guard over the food was severely scolded by Gertie, who really ran the household. Another thrilling visit was on the day Mr Choa held a bazaar in his grounds, providing all the goods for the stalls, and then giving the proceeds to Catholic charities. After many happy hours on our visits, Gertie would drive us to the Star Ferry and we would relax, and often fall asleep on the ride across the harbour.

Over the years, I have kept in touch with this splendid family; especially with Pauline, who married Tommy Johnston. Bob Symons, my husband, was best man at their wedding, and they became some of our closest friends. Margaret married Roger Lobo, whom I saw regularly during my years on the Urban, Legislative and Executive Councils. My childhood friend Josephine and her husband left for Switzerland after Hong Kong fell to the Japanese. Gertie, Robert, Angel and Leo (who married Aunt Kate's youngest daughter, Louise), I saw occasionally at the Johnston’s family gatherings.

Broadwood Road in the 1920s

Thank you, David for reposting this nice evocation of the good life in Broadwood Road in the 1920s, which reminds me to look for and read Catherine Joyce Symons’s book. Charles Warren's younger sons had a similar memory of being carried down in a sedan chair from no. 20, “The Towers”, at the top of the road to watch the races in Happy Valley. I don’t recall mention of the millionaire, Choa-Po Sien. As far as millionaires go, the Rate Book for 1916-17 shows C.S. Gubbay as having acquired 16 Broadwood Road from C.E. Warren and Ellis Kadoorie as being the owner of no. 11 in 1918-19, but I don’t know if either of them actually lived there then. The road was very newly developed in 1916. The applications by C.E. Warren to buy Crown land in the area from 1913 seem to indicate that Broadwood Road emerged from the so-called Ridge building scheme referred to in his obituary notices.

Douglas mentioned that his great-grandparents, Vernon and Doris Walker and his grandmother, Veronica, lived at 4 Broadwood Road in the 1920s and 1930s. For my Warren cousins, contemporaries of Veronica, Broadwood Road was a paradisiacal memory after their much regretted move back to England in 1938. 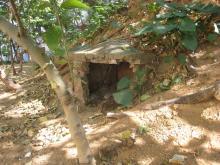