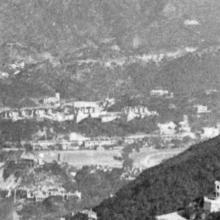 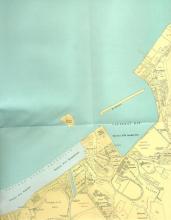 These were built in phases…

These were built in phases. From the description below I think the first phase is the block at the south end, next to the junction with Broadwood Road, then the second phase was two blocks built to their north.

96.    Quarters for Subordinate Officers, Happy Valley.—These quarters were completed early in November and were all occupied before the end of the month.

The work comprised the erection, on the east side of Happy Valley and immediately to the north of Broadwood Road, of a block of six two-storied houses of somewhat similar design to those already erected at Mount Parish and at King’s Park, Kowloon. Each house has a small plot of ground in front and a small yard in the rear from which access to a scavenging lane is provided.

Each of the four intermediate houses contains a living-room, 18' l" x 15' 6", a dining-room, 17' 2" x 13' 6'', two bed-rooms, 20' 7" x 18' 1" and 17' 2" x 13' 6", respectively, a bath-room and store-room. Each house is provided with a verandah in front on both floors. The stairs in the quarters are of timber. External stairs of reinforced concrete provide access to the bath-rooms. A ventilating space, 4' 0" high, is provided underneath the houses. A small one-storied wing attached to each house contains 2 servants’ rooms, a European kitchen, pantry, servants’ latrine, and coal-store.

The walls are of coursed granite rubble up to the ground floor level and, above that level, of brickwork in cement mortar. The principal front is faced with Formosa bricks up to the level of the first floor, above which it is finished with rough-cast plaster. The hay windows, string courses, copings, etc., are of concrete blocks, which were prepared at the Government quarry at Tsat Tsz Mui. The internal surfaces of all walls, except those of the servants’ quarters, are plastered. The floors of the rooms are laid with hardwood boarding on hardwood joists, and those of the verandahs are of reinforced concrete, finished with a layer of 6" X 6" cement tiles. The floors of the servants’ quarters are of cement concrete, finished with granolithic. The roofs, except in the case of the verandahs and servants’ quarters, which are of reinforced cement concrete, are covered with double pan and roll tiling. Electric light and bells have been installed throughout all the quarters.

96.    Additional Quarters at Happy Valley (12 houses).-— A contract was let in March to Messrs. Kang On for the erection of two blocks of terrace houses (six in each block) adjoining the existing Government Quarters in Wongneichong Road.

Externally the walls are of Canton bricks, the basement portion being covered with cement, and the ground and first floors with rough cast.

92.    Additional Quarters at Happy Valley (12 houses).—As mentioned in paragraph 96 of last year’s Report, a Contract for two blocks of six terrace houses was let to Messrs. Kang On & Co. Block 1 was completed in March, and Block 2 in July.