I've read before about the rapid growth of Tsim Sha Tsui (TST)  at the start of the 20th Century, and that certainly shows up in the Jurors Lists.

While I've got the spreadsheets open, let's check a few more hunches. It seemed the latest (1905) list is a lot more accurate. To see if that's true, here's a breakdown of the Kowloon jurors by whether their address just shows "Kowloon", or also gives a building and / or street name:

There's more of an improvement than I expected in the middle years, but 1905 is when there's the big jump in quality. Whoever was responsible for the 1905 list took a lot more care about collecting a full address.

Can we also track how building progressed across the peninsula?

Here are addresses broken down by street:

We can see which are the early roads to be lived in - There's Middle Road, near the old shoreline, and Canton Road near the wharves. Kimberley Road was also an early and popular choice, as it runs along a ridge giving residents a good view across to the island, and the chance of a breeze.  And there's Haiphong Road, whose main source of Jurors is the Kowloon Hotel.

The smaller, "filling-in" roads start appearing through the decade, but really take off in 1904-5.

So, no great revelations, but another way at looking at the development of Kowloon.

According to a Chinese web page containing the names of Kowloon and NT streets whose names have changed over the years (http://www.hk-place.com/viewtext.php?id=358), East Avenue and Sainam Avenue became (probably combined to become) Hart Avenue, and Wuchow Terrace became Gordon Terrace, both changes (plus the the other 7 listed above) occurring on 19 March 1909.  Gordon Terrace, however, no longer exists today.

It's a large table and the webmaster has listed the old and new names in both Chinese and English.

As an aside, the equivalent table for HK island is on http://www.hk-place.com/view.php?id=309.

Bunce, thanks for the extra information.

Then there must have been later rounds of name changes that made the changes you list above: Sainam Avenue to today's Hart Avenue, and Wuchow Terrace to Gordon Terrace.

Just wondering about this entry in the 1925 jurors list:

Garden Road was renamed in 1909, so why is the old name still there?

Hi Klaus, first I wondered if we'd mis-copied it from the original document for the 1925 list, but that shows the address as "24Garden Road, Kowloon" too.

David, might the Ladies Directories be a more accurate record of residences than the Jurors Lists - at least for married men? I notice in the 1906 Jurors List that my grandfather, C.E. Warren, gives his business address in Des Voeux Road  rather than his Kowloon address at the newly built Observatory Villas, given for Mrs C. E. Warren. That statistic would of course leave out all the unmarried working men, but I thought it worth mentioning. I see that Hoito mentions that the Ladies Directories can be downloaded and scanned for free for anyone who has the right to use the HKU library.

Yes, many entries in the Jurors Lists show business addresses, so the Ladies Directories are a good source of residential addresses.

My grandfather Tobias Hunter and his brother George Hunter lived at 4 East Terrace in 1905. I had thought it was Hong Kong but now think it must have been Kowloon. They moved later to Humphreys Avenue, Kowloon, so not far away. My theory is it must have been the name of a set of garden apartments that seem to have been the norm in that area. It was probably located on East Road ( Hanoi Rd abt 1909 )

There is one other possibility though, and that is, maybe there was a same named building on East Street, off Hollywood Road, near Lascar in Hong Kong. That would also have been very close to their original 11 Shelley Street address. More mysteries!

The following buildings are listed: 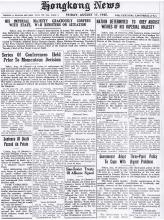