You'll see that the site has continued to grow over the last twelve months. We finished 2016 with over 3,000 subscribers, 27,000 pages, and 1,290,000 page views! Thank you to everyone who contributed to make that happen.

1. Ask for help with running costs

I made my appeal for help last April, using the Patreon service to collect a small monthly contribution from patrons - people who enjoyed Gwulo's newsletters and website, and wanted to support the costs of running them.

Combining the patrons who've signed up via Patreon, and those who contacted me directly, we ended 2016 with 54 patrons, paying a total of USD315 / HKD2,440 a month.

I was surprised in two ways: The number of patrons works out to appx 1.5% of subscribers, which is lower than I'd hoped. But the average contribution is almost USD6 per month, which is much higher than I'd expected. Thank you to Gwulo's patrons for your generous support!

I gave six talks last year. I've also finished a first draft of a book, based on my first talk, and sent it to a publisher in December. They say they are interested, so fingers crossed that will go ahead.

The site continues to grow, and it's good to see the growth is widely spread across all the different types of information:

The number of readers is growing too:

Finally, the numbers of visitors to the website continues to grow too:

This year's plans will look familiar:

1. Ask for help with running costs

The current monthly income is less than the Hong Kong minimum wage, so I must improve it or I'll have to sue myself!

I've been asked to give a new talk in May, which will be talk #4. Details to follow.

There's still a lot of work to get from having a draft to having a printed book, so I'll keep working on that with the goal to publish it this year.

I don't plan on making any major changes to the site's infrastructure this year, but instead focus on improving what we have. These are points I'd especially welcome your input on:

Add area-outlines to Places. We currently show a Place's location with a marker on a map. I'd like to also show the area that it covers. eg imagine adding the many reclamations that have happened over the years. We can make a Place for each one, but it will be a lot easier to understand their effect if we can also show an outline of the area each reclamation covers.

Add a new "Street" page type. This will be the seventh type of page, in addition to the Place, Person, etc., that we currently have. I'm cautious about adding a new type of page, as it makes the site more complicated to use and run. But I think a Street page type will be a good addition, that fits in well with the rest of the site. Some of the ways I imagine it working include:

Are there other new features you think would improve the site, and I should be aware of?

Please leave a comment below if you have any feedback or questions about these plans.

And if you've only been a reader of Gwulo so far, I hope that 2017 is the year you'll jump in and add your comments / photos / questions / research / etc., to help us continue to grow this record of Hong Kong's history we're building.

Regarding your 2017 plans I want to make two remarks. Yes, tags desparately need cleaning and allignment. If you need help, you could publish a list and ask users for comments and proposals.

Another issue are authors. If you open the list of authors, in a couple of cases names appear several times (beween twice and eightfold). Or they appear with only a slight change twice or threefold. And finally, some are listed but have no images assigned. One example is William Gerald Hillman and William Gerald Hillmann. I made a mistake by typing a double "n" when first entering the name. I corrected it, but the incorrect name still exists (and I forgot to ask for deletion).

I support the idea of adding street pages. This would mean that for e.g. (my favourite street) Barker Road a street page would be created where all the houses on it are listed. Currently, Barker Road is a place only.

You're right, I'd forgotten about Authors, but they need a clean up too. I'll look at them when I'm working on Tags, as they are very similar.

Thanks for the thumbs-up for streets too.

Next step will be to post a list of tasks, and put them in order to be tackled.

I was thinking about your idea of creating a new page type "streets". This helps to add places (e.g. houses) to a higher level category (i.e. street). Another page type might be helpful, too. When we look through Gwulo, we find similar type of buildings or other features throughout Hong Kong. If you are looking for these, of course, the tags are very helpful, but possibly not implemented in all entries. So what about a "parent-level page type" allowing pages like

Many more are possible. This could also be combined with maps such as Peter's map of cinemas.

Just an idea. I'm really waiting for you and other's response.

re: Another new page type

I like the parent-level pages you describe - your recent page about the incinerators is a good example, and you've listed several more categories above. I can think of dockyards, airports and temples as other candidates, and I'm sure there are many more.

We can use the current Forum page for these though, together with tags on the member pages. (Rob's pages are good examples, see his page for Anti Aircraft Searchlight (AASL) sites in Hong Hong.) So I don't see a need for a new page type.

There are a couple of steps that need admin help - fixing member pages that don't have the right tag, and inserting the map into the page. I'm happy to help with that, so if you want to make a page like this, just let me know and I'll fix tags / add maps as required. 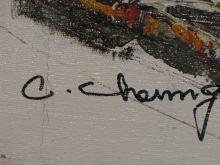