Here are some key points from this introduction:

The article doesn't give any speific contact information for the society, but here's the website for the Jewish Community Centre.

More about the Judaica Library

PL:  As  you  mentioned  earlier,  the  role  of  this  Library  is  to  support  the information needs amongst the Jewish community in Hong Kong.  So can you tell me what kind of reference enquiries do you usually receive from the users of this Library?  What would be a typical reference question for this Library?

BY:    The  reference  questions  that  I  receive  can  broadly  be  divided  into  two categories.  One is simple questions.  People ask for a particular book, or books by a certain author.  They also seek recommendations on a certain subject.  On the lighter side,  I  receive  enquiries  from  visitors  on information  on  transportation  and  sight‐seeing spots.

The other category is in‐depth research questions.  The most‐asked topic of course is the local Jewish community: how and when they came, where they came from, what their life was like.  This  Judaic Library is  the only place  to answer  these questions, and we collect all the information on our community in all formats as far as we can.

On a wider  scope,  researchers would ask  for information  on  Jewish  settlements in big  cities  in  China,  like  Kaifeng,  Shanghai,  Harbin,  and  Tianjin.    The  Jewish community in Kaifeng has always been a very popular research topic because this is where  the  first  Jews  settled  in  China  in  the  Zhou  Dynasty  of  the  Five  Dynasties Period (951‐960 A.D.).  The Kaifeng Jews came from Central Asia along the Silk Road as small businessmen.

Some cities are also quite popular [reference inquiries].  Harbin and Tianjin are large cities in  northeast  China  where  the  Russian  Jews immigrated  to during  the World War I and the pogroms in Russia.  As for Shanghai, it was an open seaport during the Holocaust, when the Nazis tried to persecute all the Jews in Europe.  There were not too many countries that would issue visa for Jews to enter.  China was one of the few exceptions.    As  a  result,  thousands  of  Jews  fled  Europe  and  entered  China  via  the seaport in Shanghai.  A lot of Jewish people from different countries come and tell us that  they  went  back  to  Shanghai  to  visit  the  places  where  they  lived  during  the World War II as refugees, or to see if their old houses were still standing.  Sometimes they pass through Hong Kong.  We can often read this kind of stories in newspapers or journals.   It is no surprise  to hear  them say, “Wow,  this is  the house we used  to live in, and  there are still people living  there! And  the current  [Chinese] occupants seem  to  be  doing  well;  and  we  used  to  have  a  table  here;  and  the  bed  was  here and…”  So  there are numerous stories of happy reunions amongst  the  Jews: stories about their nostalgic old days; or fond memories that they still cling to.

Researchers  come  to  this  Library  because  they  know  that  we  have  a  Sino‐Judaic Collection which collects all sorts of information on the Jewish communities in Hong Kong, in Mainland China, and in the neighbouring countries in Southeast Asia  This collection is still growing and expanding and will continue to serve people who need the information therein.

PL: For people who are making these kinds of  research questions or enquiries, are they mostly academics, professors, researchers or university students?  Are they usually local or overseas?

BY:  The  users  include  all  of  the  above.    I  have  also  journalists,  historians  and students,  some  local,  some  overseas.      The  extent  of  the  research  depends  on  the requirements of  their assignments.  Some people engaging in bigger projects come to  the  Library  in  person  to  consult  the  materials,  while  others  may  ask  for information by email.

I  can  give  you  some  examples  on  how  people  use  our  resources  and  what  their products are.  Once a secondary school teacher and a few students came and looked for information on the history of the local Jewish community.  They also interviewed some leaders in  the community.  The product was a multi‐media project  to enter a competition on cultural heritage among schools.  Another one was two teenage sons of a librarian friend of mine who needed more in‐depth information on Judaism than their  own  library  could  provide.    They  were  studying  in  the  U.K.  and  needed  the information  for  their  assignments.    So  while  they  were  in  town for  vacation,  they consulted the materials here.

The website for the Jewish Historical Society of Hong Kong is now up and running. You can find it at www.jhshk.org. 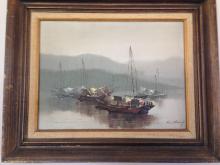