When were the Harrison Forman photos taken?

The library records for these photos show the date of each photograph as 'circa 1941'. We now believe the photos were taken in at least two batches: one during Sep - Nov 1940, and one in Sep 1941.

Raymond Lo has helped us pinpoint the dates for several photos, based on cinema advertisments that can be seen. The first group date the photos between Sep - Nov 1940:

Then another photo is dated Sep 1941:

Then were any photos taken after Sep 1941? Was it possible he was in Hong Kong at the start of the invasion in Dec 41? We've swung to and fro on this question several times:

NO: At first I remembered that Kai Tak had been bombed at the very start of the invasion, and had assumed there were no further flights after that. ie he couldn't have been here at the time of the invasion, or he'd have been stuck here and interred with the other American civilians.

YES: But one of his photos shows 'truck with luggage during American evacuation', and many more show evacuees from Hong Kong to Chongqing (also spelled 'chungking'). And this clipping (scroll down to Dec. 10) says there were 16 further flights between Chongqing and HK after the bombing. In all they ferried out 275 people, including Mme. Sun Yat Sen.I thought maybe they could have used seaplanes, even though the airport had been bombed, and so he could have been here up to and during the evacuation.

NO: Then several holes appeared in that argument:

NO: Next I asked the UWM librarian for help. She suggested Forman's book 'Changing China' gave details of his travels. It's an interesting book, but doesn't help with pinning him down to certain places at certain times. The exception is page 276, where he writes about the evacuation flights from Hong Kong : "I was on the Chungking airfield when those refugee planes came in from Hong Kong that night." That seemed like a definite confrmation that he was not in Hong Kong at the time of the Japanese invasion.

Plus he was a professional photographer. Surely he would have found it impossible to resist taking photographs of Hong Kong after war broke out, and we'd have seen at least some of these?

YES: But then Moddsey found these photos of the Kai Tak runway, taken during and immediately after the first Japanese air raid on Kai Tak: 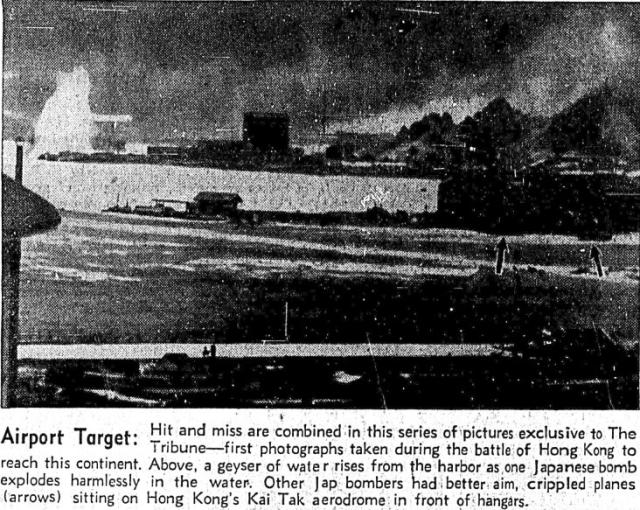 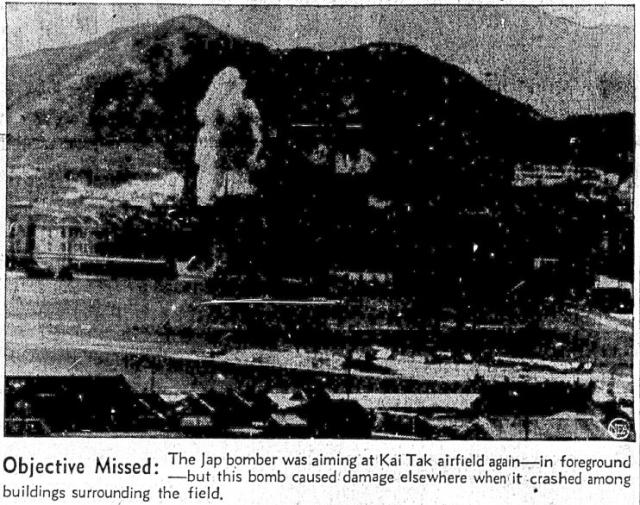 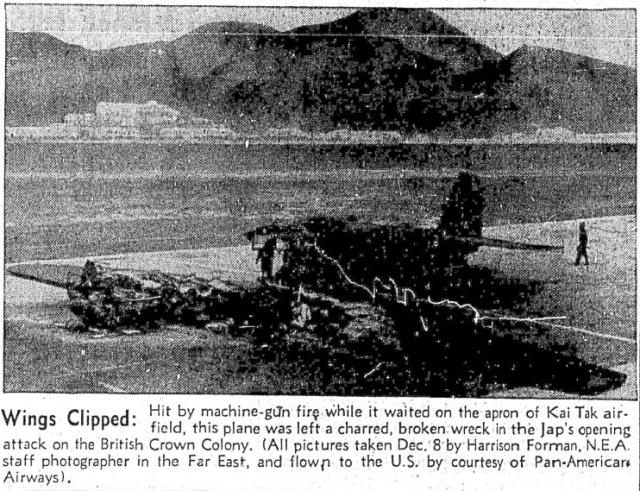 We tracked them down to the 17th Jan 1942 edition of the Winnipeg Tribune.

The last photo has the credit: 'All pictures taken Dec. 8 by Harrison Forman, N.E.A. staff photographer in the Far East, and flown to the U.S. by courtesy of Pan-American Airways.'

NO: Forman said himself he was already in Chungking at the time of the evacuation. If you look at this page (scroll down to Dec 8) you can see another photo taken that day. My guess is that whoever took that photograph also took the newspaper photos shown above. When they reached Chungking they passed the film to Forman to be developed. He'd have immediately recognised the news value of the photos, and sent them off to the US.

What other clues are there about when the photos were taken?

The dust jacket of Forman's book 'Report from Red China' says "Since 1941 he has represented the National Broadcasting Company and the Acme Newsphoto Service in Chungking except for the period of the six-month trip he took through the border region." So it doesn't sound like he spent a long time in Hong Kong in 1941, maybe just one or two short visits? Then Sep - Nov 1940, and Sep 1941 still seem to be the likely dates for the photos.

Can you identify anything else in the photos that either confirms these dates, or gives us new dates to work on?

Moddsey has pin-pointed another photo to have been taken on 30th October 1940. Details here.

Forman returned to Hong Kong on 28 July 1941 and recorded the following interview about the enforced evacuation of women and children of European stock to Australia in 1940: 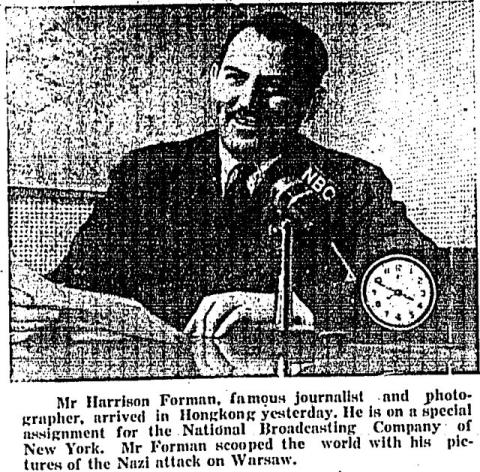 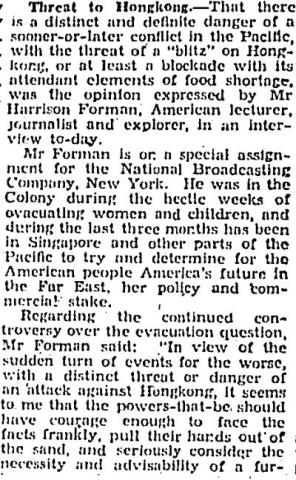 On the 4 August 1941 he made the following radio broadcast on 'ZBW; (forerunner of RTHK) which was relayed to the USA: 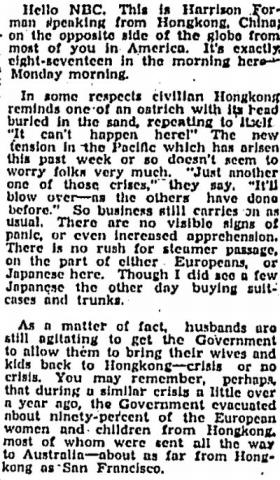 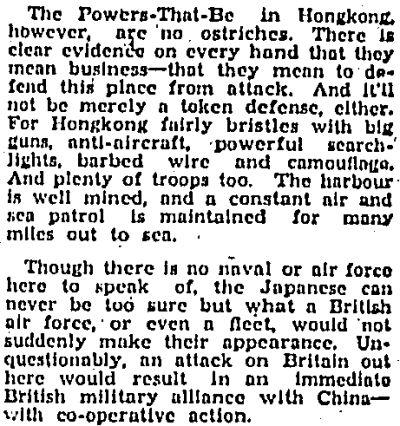 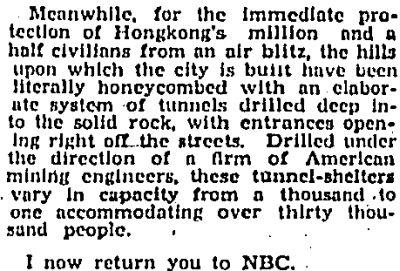 Another broadcast was made on 14 August 1941 with GOC Gen Maltby: 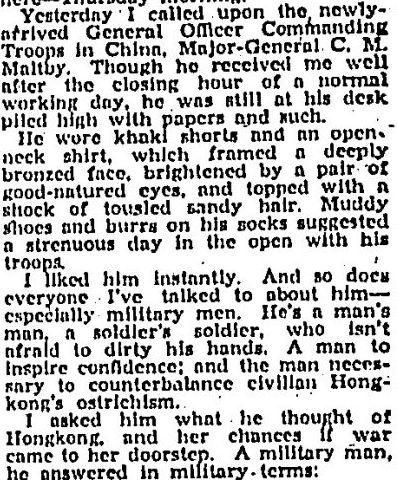 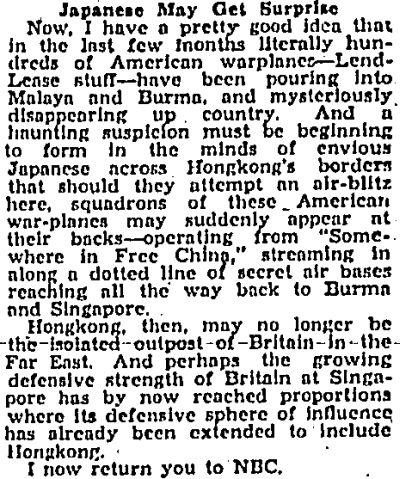 Some of his photos which are confirmed to have been taken in early September 1941 also match the completion period of the Arsenal St ARP Shelters.

IDJ has solved the mystery, finding this explanation of who took the photos, and how they ended up being published under Forman's name:

((Shortly after the first Japanese air-raid on Kai Tak...)) Of course, we realized the Japs would be back as soon as they got re-loaded. We had two men outside the hangar listening and watching for aircraft. Lt. Moss had men on the tower doing the same. We agreed that as soon as we got the word, we would all disperse. And sure enough, it wasn't long in coming. The Yell went up! Most of us sped to Lee Taylor's house as it was ideal and located on the hill, and many big boulders affording good shelter. This run, the Japs took a look at Kai Tak, but went on to the docks and Wharfs and bombed the island. I took some good pictures of this, only to have my film stolen by Harrison Foreman in Chungking.