So much in this picture

The date is Thursday 1st March 1860 (can anyone tell the time from the shadow position of chimneys on Building F?) , all the ships and soldiers in the harbour are off to burn Beijing down to the ground because of interference in the European Opium  trade.... How many ships are there?

References mainly taken from the Map of A.F. Alves 1862

A Roman Catholic Cathedral – being reconstructed after a fire

Above E, where the shoreline starts to turn is the Original Central Market

Opium Dealer and holder of first Hong Kong Opium Monopoly with Alexander Mathieson in march 1845 (Their monopoly only lasted 3 months) By the age of thirty six George Duddell had made his fortune in Hong Kong by becoming an influential property owner. He was also government auctioneerA special Land committee set up in 1850 to examine excessive rents found half the land involved belonged to George Duddell.  He then 'retired' to England in 1858

To the right of Flagstaff are tents where Victoria Barracks will be built Scandal Point [????- ]

Wow, what a photo! Great clarity for its age, nice patching to complete the panorama and brilliant analyses to identify the buildings.

The sun seems to be in the west/north-west. If so, it'd be late afternoon. Is it a trick question?

Not a trick question, as we

Not a trick question, as we had the date for the photo, why not get the time too. 4pm sounds about right.

I think the ships were not moving, not yet, although they were aiming to exit the harbour.  They were too close together to be in a moving convoy, their sails not in place, and the wind appeared to be from the east of north east as indicated by two flags in the photo.  Is that Signal Hill I see in the photo?  This is one impressive view of the natural landscape.  Regards, Peter

I just posted the opposite view from Kowloon. In it you can see the military force encamped waiting to board the ships and sail for Beijing.

The roof of Building D in the photo does not look like Zetland Hall 1st Gen, but looks very much to me like it's Zetland Hall 2nd Gen.

Update: after a bit more careful viewing, this is actually Zetland Hall 1st Gen... the windows and wall beyond the hall definitely do not match Zetland Hall 2nd Gen. Apologies for any confusion.

It's nice to have another view of a building that is so often obscured in Photos. 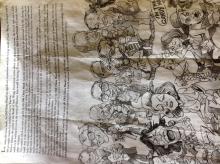