This stood on the corner of D'Aguilar Street, Queen's Road, and Wyndham Street.

In 1897, the Hong Kong Club moved out of this building to their "new" building on the Chater Reclamation opposite the Cenotaph.

The Chinese YMCA moved in at some point, and then moved to Bridges Street in 1918. 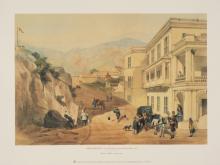 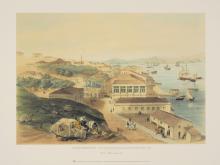 The Hong Kong Club moved out in 1897.  The Chinese YMCA moved in at some point, and then moved to Bridges Street in 1918.

The reference to the Hongkong Club's old premises recalls that the club was opened on May 26, 1845, in the building which was last occupied by the lee Sang Fat Co. and was demolished a few years ago for erection of the King's Theatre, in Wyndham Street, which was demolished at the same time, had been the Club's bowling alley. It is on record that the original Club building cost £15,000 quite a big sum in those days.

The Club was opened in 1846 with a grand ball, and some of the objects for which the institution was formed are set out in the old Rules. A copy of these rules dated April 1863, states: The object of The Hongkong Club will be best understood makrs: - Upon the establishment of the Island as a British settlement a new era commenced in the social relations of previous to the War there were only a few Merchants, intimately acquainted with one another, but in consequence of the new arrangements there are now in Hongkong, the Civil Servants of Government, the Naval Service, the Military Service, and the Mercantile Community, each of whom have hitherto remained almost isolated in habits and intercourse from the others. One object of the Club is to assist in producing a greater community of feeling among these classes.

Further; Hongkong Is destined from its position to be the headquarters of British Government and Commerce in China. Constant communication being kept up with .Canton Macao and the Northern Ports, it will be the temporary resort of the resident from these places, while the newly acquired Steam Communication will no doubt bring an increased number of Visitors from other countries.  To all such, the Club cannot fail to be an immense convenience

The year after the Club was founded we have the following comments published in an old chronicle:

It is a handsome three storied building and with the out Offices covers nearly the third of an acre of ground. The interior arrangements are very elegant and reflect great credit or the Architect (Mr, S Strachan)  for whose design for the Builing a premium was awarded. The entrance Hall and grand staircase in the centre supported on fluted columns with capitals in the Corinthian order has a very noble effect. The formation of this Club owes, its origin to a desire of promoting a general community of feeling, among the Mercantile, residents, and between thejn and the Members of the various branches of Her Majesty's Service, stationed in the Colony.

The Cost of the building and Furniture has exceeded £15,000 for raising which sum Shares of £100 each were taken principally by the Merchants among themselves and the standing Committee for the time being constitute a board of Trustees for the Shareholders at large. Members are admitted by ballot, two black balls in a ballot of Ten, excluding 'besides and entrance free of 30 a subscription of $4 per month is payable quarterly in advance Distinguished Strangers visiting Hongkong are eligible as Honorary Members, and pay neither entrance fee nor subscription during their stay in the Colony. The Management of the affairs of the Club is committed to the standing Committee of five Shareholders, a General Committee of twenty residents members, and a Secretary: Three of the Members of the General form a Sub-Committee for the supervision of the internal arrangements of the club examining accounts, passing bills for payment &c. This Sub-Committee meet at least once a Month, Meetings of the General Committee are held in the first week of every quarter, or oftener as may be requisite: a yearly General meeting of the Club is held in January for purposes of general review and re-election of Committees.

The Clubhouse is opened at 6 a.m. and closed at Midnight. Members or subscribers can be accommodated with bedrooms at 1 per night, and may not be disturbed in occupation of the rooms for 8 consecutive days.

Members or Subscribers may also give private parties on due notice of the same being made to the Steward.

The Prices of the Wines and Provisions, are written up in the Dining Rooms. There are two Billiard Tables in the Establishment and Cards and Chess are permitted ( without gambling ) on every day, excepting Sunday.

Much trouble was caused by the blackballing of candidates or membership of the Hongkong Club. in 1860 we learn that any persons who, from their social or official position had claims to admission were blackballed with distressing frequency

In April of the year named, the Club made a rule requiring cash payments, in the case-of naval officers. As a consequence naval officers on the Station assembled in full force on April 18 and demanded the names of those whose bills had remained unpaid. When the Committee refused to give the names, the officers withdrew in a body from the Club, and military officers also threatened to do likewise. The dispute was, however amicably settled in December. In the following year, Volunteers returning from patrol duty were made to fall out in front of the Club, and some members invited friends amongst the Volunteers to join them in Refreshments. This was a breach of the rules and when the intruders were ordered out of the building, much animosity ensued which for a long time lacerated social life within and 'without the Club.

In 1897 The Old Hongkong Club building was purchased by a syndicate and a new club started there, it was the aim of the promoters of this enterprise to make the Club exclusive, but not so exclusive as the original Hongkong Club. One hundred applications for membership had been received before October on which date the Club was officially opened. At the first meeting of members the name adopted was "The New Club" (forerunner to the Phoenix Club)

The building is described by W. Hastings Macaulay on p.67-68 of his book Kathay: A Cruise in the China Seas:

But the pride of the colony should be its club-house, which is the finest looking building in the place of its style. It is very extensive, and built of blocks of granite, with a splendid front, a facade supported by a number of large granite pillars; and its interior arrangements correspond with its external appearance.

Ascending by steps from the street, you enter, from a wide portico, which extends along the entire front, upon a large open hall, in which are entrances to different apartments— billiard rooms, writing, smoking, and general reception rooms, and the superintendent’s apartments. Two wide flights of stairs bring you to the upper story, or au premier, as the French would call it.

Here are a suite of rooms, extending along the whole front, in which are newspapers from all parts of the world, materials and tables for writing, and all kinds of couches, divans, &c., for lounging. You can step from these rooms upon a magnificent balcony, corresponding with the porch below, where you can enjoy such refreshments as you may be pleased to order, al fresco if you choose.

Another large apartment is used as a restaurant, and in another place is a fine library. Upon the floor above are sleeping apartments, baths, &c., and the attic furnishes rooms for coolies and attendants.

Through the attention of our consul, we had the entree and use of this desirable place, and never did tired traveller enjoy the friendly welcome of an inn, after a weary journey, more than I did this hall of ease. Like the dove, I had found a resting-place from the waste of waters, and loth, very loth was I to return to my home upon the deep.