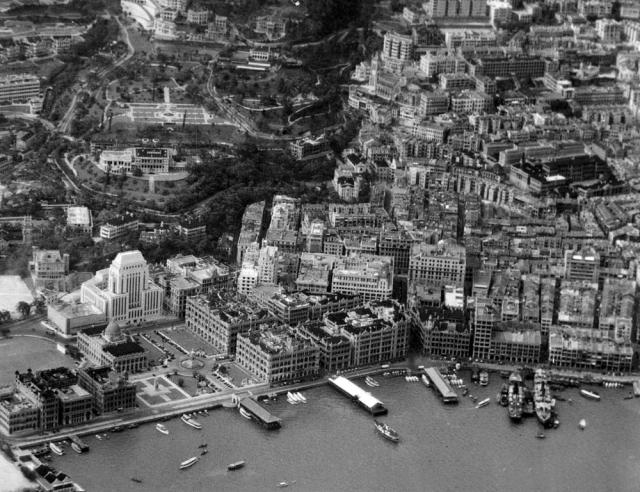 Central District circa 1935. The Bank looks very new. Quite large cargo ships are moored close to the General Post Office indicating how much depth of water there was to be eventually be filled in to build up the land we walk over today. With many similar images from over the decades it should be possible to build up a sequence or montage, perhaps morphing images from the earliest to the present. IDJ

How about the view of the HSBC taken from the sea, so we'd see the section of seafront from say Murray Road across to the GPO? It's a popular view of Hong Kong, so it should be possible to gather a collection of photos relatively easily.

I've changed the date from

I've changed the date from 1935 to 1950, as we can see the Bank of China building is under construction.

Re: changed the date

I don't see the Japanese tower at Goverment House.  Would the construction site next to HSBC a demolision site instead?

Thanks Thomas, and apologies to IDJ!

Re: I could not resist throwing in more confusion :-P

Take a look at this photo.  I guess that might mix up the dates a bit more.   Would the photo posted by IDJ dated after the one posted by Marlowe?  We might as well sort both out.

looks to be the demolition of the north and east remaining parts of City Hall (as pictured here http://gwulo.com/node/7011), which took place in 1936. you can't quite see the temporary library section which was left over (or it's also covered up by scaffolding.)

Incidentally, that photo I just linked appears to show the demolition of the old Beaconsfield Arcade (http://gwulo.com/beaconsfield-arcade), which should help us date its end, as well as the construction of its little replacement, seen in T's picture he linked to above.)

Hi 80sKid, was the library in operation from the early 1930s to the late 1940s?  And was this a part of the original City Hall structure?  From this angle it did not look like so, but I could be wrong.

from the information gathered so far it was built 1933 and demolished prior to the construction of the Bank of China: http://gwulo.com/node/7010. I'm guessing it was built as a temporary home for the books in the City Hall library until the rebuilding of City Hall could take place along with the new government offices and the governor's house -- which never happened. Beaconsfiled Arcade was part of the land sales along with City Hall to fund the new buildings.

...The Fund was designed to finance a large, specific scheme of re-development of an area including the site of the former City Hall and the site of the Government House and Colonial Secretary's Office buildings. There was paid into the Fund the proceeds of the sale of a part of the City Hall site to the Hong Kong and Shanghai Banking Corporation, and it was also proposed in due course to pay into the Fund the proceeds of the sale of other land in this area as development proceeded on the basis of a detailed plan drawn up and referred to in the 1934 Ordinance. It was the hope that the proceeds of these sales would be sufficient to pay for the re-building of Government House and Government offices and also for the provision of a new City Hall in replacement of that demolished.

The operation of this scheme was suspended for various reasons and when Sir Andrew Caldecott became Governor he indicated his opposition to the whole scheme because he disliked the idea of intensive development of the Government House and neighbouring sites, and was not convinced of the necessity of re-building Government House itself. The whole subject was, therefore, in abeyance when Your Excellency assumed the Government.
legco record Feb 1939