Blake Pier was built on Connaught Road at the end of Pedder Street, and opened in 1900. The Report of the Director of Public Works for 1900 said:

Blake Pier - This work was completed by the contractors for its erection - Messrs. Kinghorn & Macdonald - and opened for public use in November. Its erection was commenced on the 1st December, 1899, and the somewhat lengthy period occupied was owing to considerable difficulties experienced in screwing the piles home. These difficulties were successfully overcome and the work satisfactorily completed.

His Excellency Sir Henry Blake, G.C.M.G., inaugurated the pier on the 29th of November.

Initially it was just a pier without any roof - not a very practical design given the hot sun and heavy rains of a Hong Kong summer. So the month after the pier was opened, the government launched a competition for the design of a clock and roof for the pier:

His Exvellency Sir Henry A. Blake, G.C.M.G., Governor of Hongkong, invites designs accomompanied by estimates of cost, of a Clock Tower on the base of Blake Pier and a roof over one half of the shore end of the pier.

A premium of $250 is offered for the design considered first in order of merit.

The designs submitted to become the property of the Colonial Government.

The shelter was finished in 1909, as reported in the Public Works report for that year:

90. Blake Pier Shelter. The fixing of the lamps was completed in January and the painting of the ironwork of the shelter was finished during the month of March, thus completing the work.

Perhaps the shelter attracted more people than the governmnet expected? In November of 1909 they issued Regulation No. 703:

No person shall sit or stand upon any part of the railings of Blake Pier.

(I wonder if the regulation is still in effect, in which case I've seen plenty of law breakers at the pier in it's current location in Stanley!)

I'm not sure the exact date when the pier went out of use. I'm guessing it was in the early 1960s, when reclamation moved the coastline again. 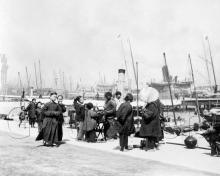 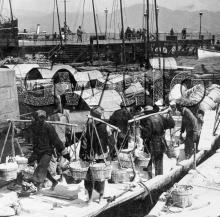 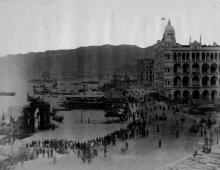 In 1903, a temporary matshed shelter was constructed over Blake Pier. 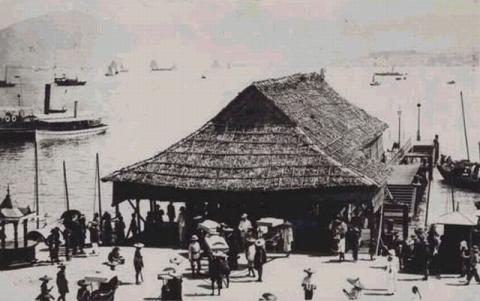 Nice shot of Blake Pier taken around 1961 from the Star Ferry Reclamation. The GPO and its ugly extension to the waterfront can be seen. I think it was used for the loading and unloading of hefty mailbags onto/from mail boats. The Hang Seng Bank Headquarters next to the Central Fire Station completed in 1962 was still under construction. Union House, today's Chater House stands oppoiste the GPO. 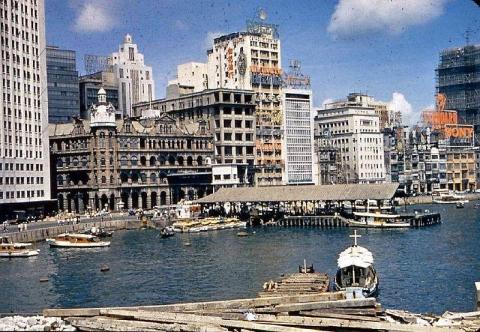 I think we can go with 1965 as the demolition date, but maps suggest it went out of use a bit earlier. The 1964 map (plate 3-6 in Mapping Hong Kong) shows the new Z-shaped Blake Pier already there.

That new pier can be seen in the 1960's aerial photo that 80skid mentioned before:

Hopefully there will be a mention of it's closure in the newspapers from the early 1960's, but the public library's online search seems to be broken at the moment.

There is a mention and a photo in the HKPL of Blake Pier being dismantled in 1965: http://hkclweb.hkpl.gov.hk/hkclr2/internet/eng/html/frm-bas_srch.html 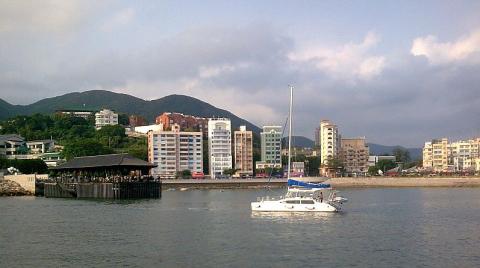 Interesting photo on HKPL site. It shows boats still tied up to the sea wall at Connaught Rd next to Blake Pier in the photo dated 1965.

The 1964 map I mentioned above shows the new seawall complete, and no sign of any piers left along Connaught Rd. Maybe the map was just showing a projected view of how it would end up?

More photos & descriptions from the HKPL collection (via the 18 districts website):

The matsheds were destroyed during the typhoon that hit Hong Kong on 27-28 July 1908.

Remember the 1964 edition of the arial photo book?  I checked the Central photo and the L Shape Blake Pier was present, however the reclaimation between the Blake Pier and the vehicular ferry pier was still in progress.

Hi T, please could you let me know the full title of this book? I'd like to take a look at it in the library, to decide whether to get a copy.

This link contains the press release concerning this book.

Thanks T. I see it's only HK$145, so I'll just get a copy anyway. Sounds like  auseful tool to have.

You might need a spy glass and it wouldn't beat the photos in the Central Library or those available in the Lands Office as there is always distortions during the printing process.  Anyway there is still quite a lot of guess work while viewing these photos for small structures.  However bigger landmarks should be easy.

Took me awhile to nail this photo postcard down. I reckon it was taken around 1964. The old pier and the new Z pier under construction can be seen. 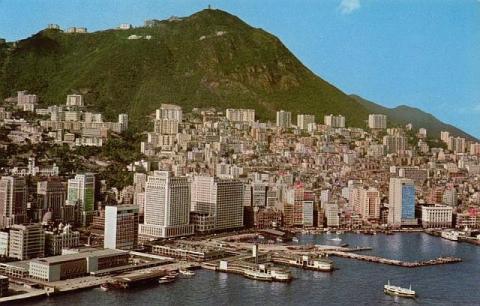 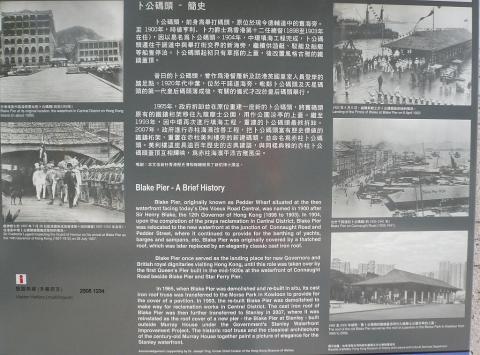 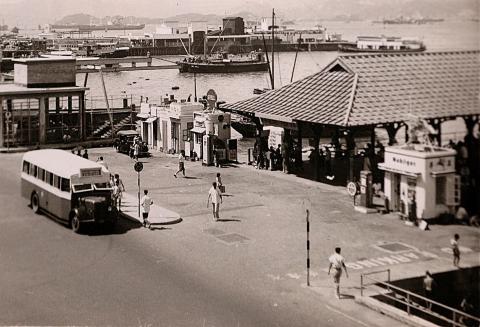 Took this pic around 1953/54 from the open verandah of the Catholic Club, Connaught Road, looking West. The one below taken at the same time from the same spot looking East towards the Kowloon Star Ferry. I think the Catholic Club is now known as the Catholic Centre, but doubt if it is in the same building as in 1953. 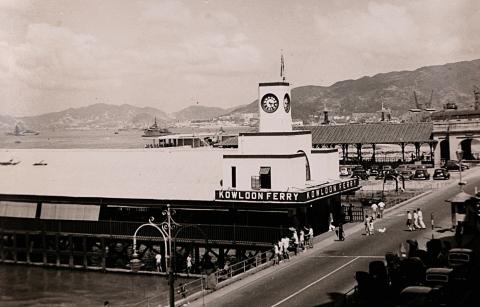 There's a good account of the Piers history in the Paper accessible by clicking the link at "References 1" at https://en.wikipedia.org/wiki/Blake_Pier_at_Stanley. The page numbers quoted below refer to the Paper.

Firstly, from Page 98, "There is no authentic and reliable record on the (original) design of the Pavilion as the record kept in the Architectural Office was lost during the Second World War". Assuming the photo at www.gwulo.com/atom/12657, and your photo above, show it in its original form, it consisted of a central roof with matching, sloping gables at each end. The roof was supported on posts, probably four at each end and in pairs along its length. Although it's difficult to say for certain, after studying your photo (see http://gwulo.com/node/23337) I'd say there were 19 rows of posts, consisting of 17 pairs plus one row of four at each end.

Page 102 of the Paper disagrees with my figure of 17 pairs, saying, "The Pavilion consisted originally of 16 sets of structural steel main plain trusses... supported originally by two...cast iron posts". If 16 is correct, then adding one row of posts at each end to support the gables, would give a total of 18 rows of posts. No matter how hard I look at your photo I can't see as few as 18.

Moving on. One of the sloping gables was damaged during WWII leading to its removal in 1948 (Page 97). The Pavilion without the sloping gable at its north end is seen in www.gwulo.com/atom/12660.

The Pavilion was dismantled in June 1965 as part of harbour reclamation work, stored in Ta Kwo Ling, then rebuilt in Morse Park in 1966 as seen in www.gwulo.com/atom/18541 and www.gwulo.com/atom/12790 (bottom right photo). One sloping gable was still missing, but the Pavilion was significantly shorter as the number of rows of posts was reduced to 11, consisting of one row of four supporting the remaining sloping gable and 10 pairs along the sides. "In the relocation works of 1965, ten sets of main plane trusses were preserved...and the cast iron posts were replaced" (Page 102).

When the Pavilion was again moved to Stanley in 2007 the long missing sloping gable was replaced, giving todays Pavilion 12 rows of posts (1 row of 4 at each end plus 10 pairs along the sides).

To summarize, the Pavilion has stood in three locations in four different forms;

1. In Central, in its original elongated form (16, 17 or 18 main plane trusses depending on who's counting), with;

3. From 2007 to the present in Stanley in the shorter form but with two sloping gables.

40. The new pier opposite the end of Pedder Street, 200 feet. long by 10 feet wide, was completed in October, and opened to the public on the 29th November by His Excellency Sir HENRY A. BLAKE, G.C.M.G., who was graciously pleased to consent to name “Blake Pier."

The pier projects from a solid base of granite masonry 126 feet wide projecting 40 feet from the line of the Praya wall, with a ﬂight of stone landing steps at each side. It is 200 feet long by 40 feet wide with eight ﬂights of steps, four at each side. It was constructed by the Horseley lron Works Company from designs and speciﬁcations prepared by Messrs. Coode, Son & Matthews. It was erected here by Messrs. KINGHORN and MACDONALD under the supervision of Messrs. J. F. BOULTON and J.R. MUDIE, Executive Engineers. Difficulties were encountered, but successfully dealt with, owing to the great depth to which the piles had to be screwed, and the nature of the bottom -some of the piles being upwards of 60 feet below the high water mark. The base was designed to carry the new Clock Tower which it is proposed to erect to take the place of that which stands in Pedder Street and which has become an obstruction to the traffic. The cost of the Blake Pier was $122,771.00.

This typhoon which was of considerable severity —the centre passing within a few miles of the city did no damage to the Praya wall or piers, but the heavy seas which broke over the roadway of the Kennedy Town reclamation scoured out deep holes in it and washed off all the surfacing.