This was the name of the English-language newspaper published during the Japanese occupation of Hong Kong. Moddsey notes it "operated out of the former South China Morning Post/Hong Kong Telegraph Building on Wyndham Street."

There are microfilm copies available for viewing at the HKPRO and the Public Library. Tony Banham mentions a couple of other sources in the May 2010 entries on his website:

24 Stuart Braga notes that the National Library of Australia also has copies of HKU’s Hong Kong News set, and has J.M. Braga’s set of originals, which is about two-thirds complete (having been assembled in Macau where delivery was not always assured). He was also kind enough to send me some examples.

As far as I can tell, none of these collections allow online viewing. Fortunately Chris King and another anonymous contributor have sent us scans of several issues, which you can read at the links under the "Pages"  heading on the right of this page. The two I found most interesting were the 21 Jan 1942 and 17 Aug 1945 issues. The first shows several photos taken during and after the fighting. The second is the final issue, where the editorial team show a very different tone now that Japan had surrendered.

As you'd guess, the paper was an important source of news for prisoners in Hong Kong at the time, as long as you could filter out the facts from the propaganda:

[The Hongkong News] was a two or three page sheet produced by the Japanese for propaganda purposes which circulated around Stanley [interment camp]. For some time it was edited in town by a former Royal Navy Commander called C. M. Foure, who many considered a flagrant collaborator. His was a sad story. He had been in command of a gunboat on the river at Canton in the 1930s when Chinese mobs attacked the European settlement, the Shameen. He opened up on the crowds with his machine gun, for which he was dismissed from the service. He came to Hong Kong and "went native" as we used to say, in a low-class Chinese slum. Nevertheless, his editing of the news sheet was not treachery as he was able to put across the rumours, half-truths, and exaggerated Japanese war victories in such a way that it was obvious to an English reader what was fact and what was fiction.

This by email from Don Ady:

We had an interesting chap down the hall from my Stanley quarters, a Captain Manthey, self described as a retired sea captain who had long commanded an American  freighter.  Manthey wore a white beard and once advised me that a tiny mushroom I found was edible (and I ate it without issue).  Manthey was one of those who read the mentioned paper, and in doing so, counted up the allied sinkings tallied by the Japs.  He also said he knew the American civilian and naval ship tonnages.  According to Manthey (and this in 1942 while we Yanks were still there until June 29) the reported sinkings were double the possible tonnages, had the Japs actually sunk everything.  Manthey also played a little stunt in which he was suspected of kleptomania.  Actually he'd got a box of tea, and, generous soul, planned to share it.  But, lacking the tea service, he had gone around clandestinely "borrowing" enough cups, being seen doing so on at least one occasion.  After serving tea to his guests, they all thanked him, and carried their cups back without a comment on them.

Another writer describes the different ways the internees treated the paper:

A bundle of [the Japanese Authorities'] English-language newspaper, The Hongkong News, its pages filled with the most outrageous propaganda, was sent into the camp daily with the rations and a copy was given free of charge to any internee who cared to collect it. There were amongst us a number who refused on principle. Others read the paper to relieve the boredom of internment or to have something to talk about, while others, who were of a more practical disposition, availed themselves of the opportunity to add to their precious stock of kindling for a chatty or to supplement the toilet paper of which we were so desperately in need.

Local news aimed at giving an impression of East Asian Utopia, with a happy and contented Hong Kong in its midst. The persistent and rather pathetic endeavours of the government to create a 'Greater East Asia Co-Prosperity Sphere', with the object of benefiting all Asiatics, was the guiding principle on which local propaganda was based. Reports and photographs of daily activities appeared frequently - victory marches, festivals of Japanese, Chinese and Indian origin, and anniversary celebrations.

As an example of its approach Tony posted the front page from the issue that reported the sinking of the Lisbon Maru. It's a good example of how far from the truth the reporting was:

More than 900 British war prisoners who survived the sinking by an American submarine of the Nipponese army transport, Lisbon Maru, expressed upon their arrival here today indignation and chagrin that an Allied Power was the cause of so many of their comrades' lives. At the same time, they expressed gratitude for the considerate treatment given them by the Nipponese authorities.

You can read more about that 'considerate treatment' here. 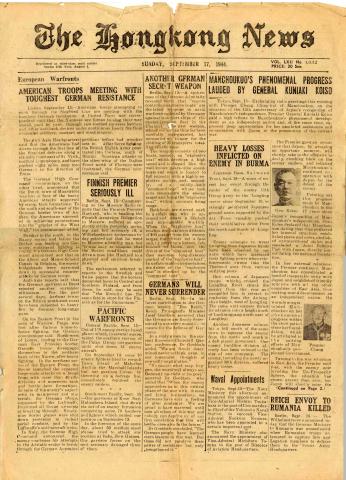 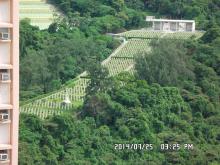