At the end of Ma Tau Kok Road there are the remains of an old pier.

Looking at the 1952 map, it's the nearest pier to the old cattle depot, so I wonder if it is where cattle deliveries by sea were unloaded? [Update: It was a combined refuse boat pier and livestock landing pier. See comments below.]

Ferries to Jordan Road sailed from this pier.

The first Fenwick Pier was built in 1929 during the East Praya Reclamation. In the Public Works Report for 1929 is the following entry:

Public Pier ‘A’.—This pier is situated at the end of Fenwick Street. The decking, landing steps and fendering -were constructed during the year, thus completing the pier.

In the 1930 Report the pier is specified in more detail:

The earliest mention of Murray Pier I can find is from 24th January 1880 when His Excellency Lau Kwan-Yih, late Viceroy of Kwangtung and Kwangsi and Viceroy elect of Two Kiang arrived with his entourage in Hong Kong, landing at Murray Pier. (Source)

Demolished due to the Central Reclamation of the 1890's. A new pier was built on the foreshore.

After the early 1900's dockyard reclamation a new Murray Pier was opened a few hundred feet to the west. The original Pier became part of the VRC. 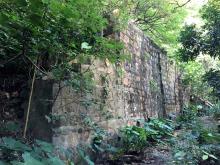