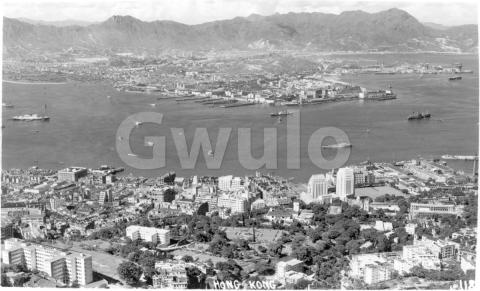 The panorama includes views of Hong Kong Island's north shore, the harbour, and Kowloon beyond.

The last photo we looked at was also a Real Photo Postcard (RPPC). We looked at its back to see who manufactured the paper, and so get an idea of when it was printed.

Here's the back of this current card. 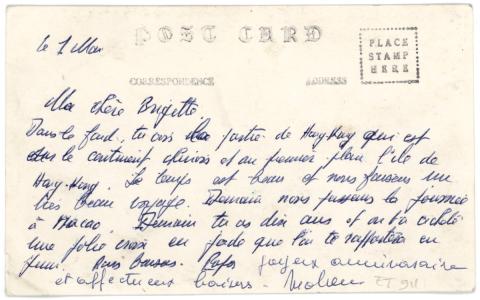 There isn't any manufacturer's logo to help us here. Instead I believe this is regular photographic paper, and the photographer used an inked rubber stamp to add the text that turned it into a postcard.

That is still a clue though, as these hand-stamped RPPCs from Hong Kong tend to date from the 1940s and 50s. I think it was a sideline for local photographers in those lean years, where they'd earn a little extra money by taking photos of popular scenes and selling small quantities as RPPCs.

So it's back to the front of the card to find the date. If you're ever asked to date a view like this, here are four landmarks that are usually easy to see, and will quickly give you a rough idea of when the photo was taken:

The first three buildings are all there so the photo was taken no earlier than 1951. Then there's a ship in the dry dock, so it was also taken before 1960, matching the seller's date of the "1950s".

We can do better than that though, if we can find a building that is still under construction. Across the water we go... 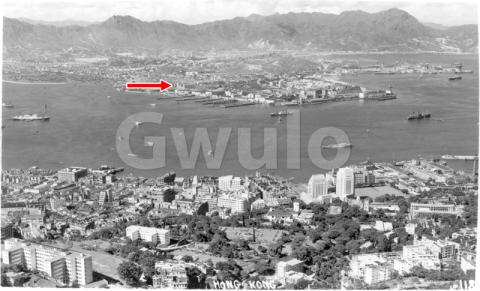 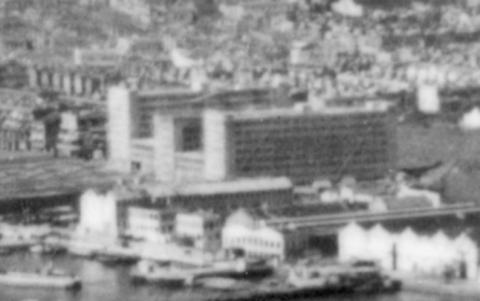 These three towers on Canton Road will be new married quarters for Hong Kong's police force. Here's how they'll look when they're finished.

In the main photo the building is obviously still under construction, though it doesn't look far off completion. These quarters opened in 1953, so I'll date the main photo to 1952.

More new buildings. Hong Kong is picking up speed again after grinding to a halt during the war years.

One way to spot the new buildings is to look for ones that are taller and / or brighter than their neighbours. There are several more in this area... 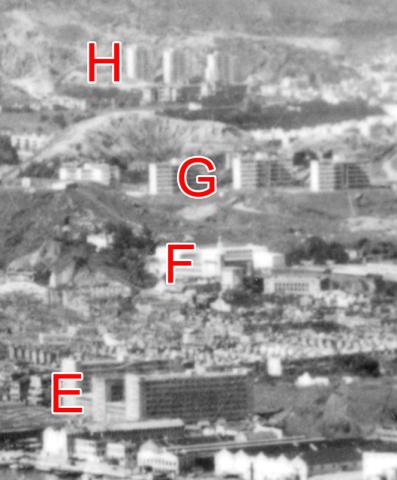 And I can see three more along Nathan Road...

Hong Kong island has its share of new buildings too...

I've probably missed some, so please leave a comment below if you spot any more.

New arrivals to Hong Kong, hundreds of thousands of them.

We can't see them directly, but we can see their presence from those new buildings. You might have wondered why so many of the new buildings are quarters? In the decade following the second world war, Hong Kong's population quadrupled from around 600,000 to 2.4 million. Accommodation was in terribly short supply, so if an employer could provide accommodation to their staff, it made them a very attractive place to work.

If you've got Volume 1 of my books, photos 16-22 are a sequence showing how this scene changed from 1886 to 1965, Photo 21 makes a good comparison with this one, as it was also taken in 1952 but shows a larger view of mid-levels and Central.

HSBC's quarters at the back of Kowloon were short-lived even by Hong Kong standards, lasting less than ten years.

If you find the quarters on the main photo and then look right, the flat area between the quarters and the sea is the site of the old Kai Tak Airport. In the mid-1950s a new runway was built from Kai Tak out into the harbour. Landing on the new runway would require pilots to follow that famous flight path over Kowloon with the last-minute, hard right turn to line up with the runway.

Unfortunately the quarters' three tower blocks and a sizeable hill behind them were in the way of the new flight path. The buildings were demolished, and the bulk of the hill was sliced away to leave the flat land where you'll find Kowloon Tsai Park today.

David, I assume you might have a better resolution to the scanned photo as the zoom feature blurs out quite quickly.

The reason I mentioned that is with regards to the Peninsula hotel in Kowloon.

Andrew mentioned https://gwulo.com/media/31972 that the hotel was still covered in external camouflage in 1952. And moddsey once put forward the hypothesis that this https://gwulo.com/media/42797 could be the sprucing up of the hotel's exterior in the early 1950s for the Queen's coronation in 1953. Maybe if you can zoom in to confirm the absence of the camouflage you might be able to tentatively date the photo more towards 1953?

Here's the maximum resolution view of the Peninsula from this photo:

The paintwork looks uneven, but isn't the clear camouflage pattern shown on earlier photos, e.g. this one dated to 1946:

So I'm not sure if the hotel still had the camouflage paintwork or not in the main photo. 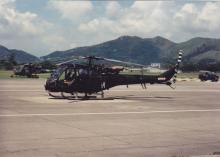