This week's view is from an old postcard titled "Central Praya". 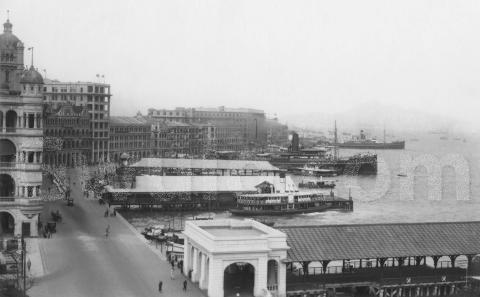 Where: We're looking west along the old seafront, or "Praya". It's today's Connaught Road. There's a patch of open land in the foreground on the left, part of Statue Square. That puts the photographer and his camera up on the balcony of the Hong Kong Club building.

The first building we see is Queen's Building [1]. It's also the oldest building in the photo, completed in 1899: 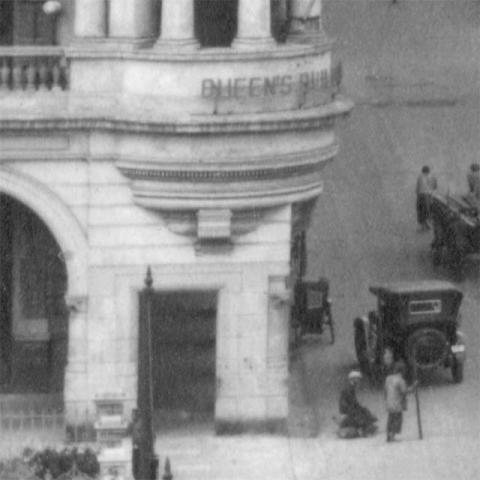 If we walk on along Connaught Road we'll pass several buildings, then after crossing Pedder Street we'll reach this one: 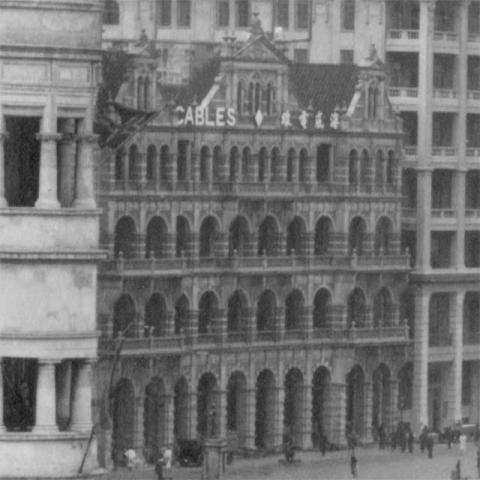 It's the General Post Office [2], with the taller and newer P&O Building [3] just beyond it.

The next few buildings are anonymous-looking terraces, four storeys high. There's one with a clear sign though, the "Tokyo Hotel" [4] on the corner of Pottinger Street: 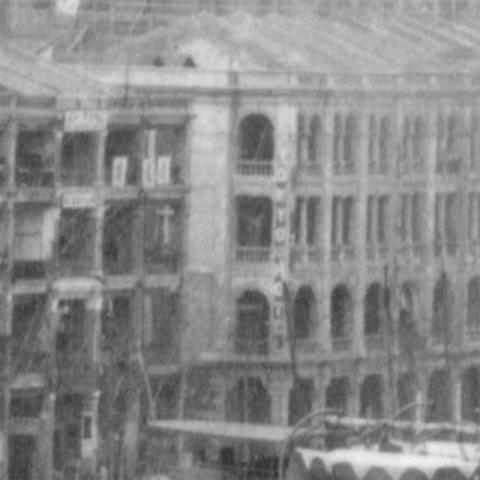 After that terrace is a taller building, the Central Fire Station [5]: 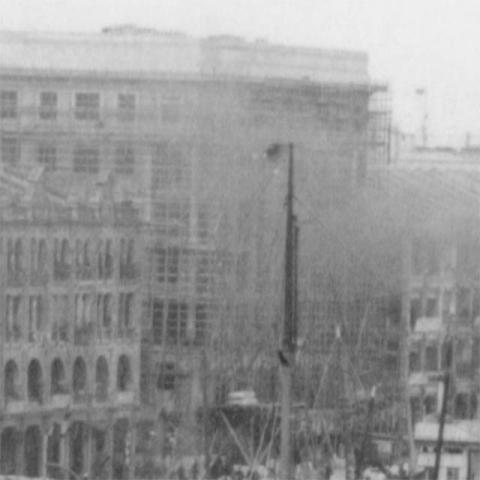 When: The Central Fire Station opened in 1926, but here it still has the scaffolding up so it isn't finished yet. I'll guess the photo was taken in 1925.

Today the city and the harbour are quite distinct. Apart from the ferry piers in front of the IFC, much of today's seafront is a recreational area, fenced off from the sea.

But in these old photos, the city and the harbour have a close, working relationship. First you notice there isn't any fence along the water's edge. Boats could tie up at the seawall, pop up a gangplank and start unloading. Sea trade was happening all along the north shore. There was passenger traffic too, whether a short trip across to Kowloon, a ferry to a port in China, or a ride out to a liner in the harbour then on to a foreign destination.

As we walk back, we'll take a look at what's happening along the busy waterfront, starting with this ship, moored alongside a pier:

The ship has distinctive funnel markings: 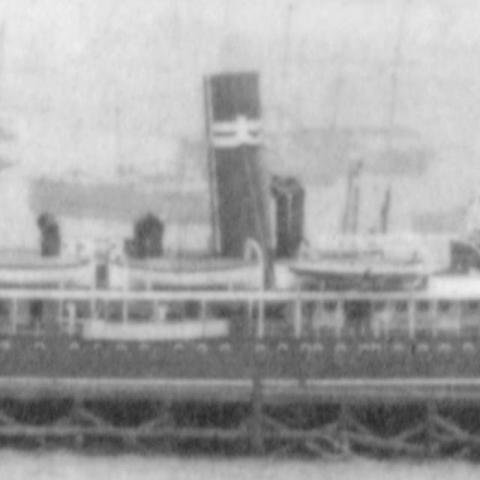 They're the markings of Osaka Shosen Kaisha, or O.S.K., a Japanese shipping line. They had their own pier [6], the one we can see in the photo. You might think it was almost in front of the Central Fire Station, but the photo is misleading. Instead the pier was further west, near the junction with Gilman Street.

Further along there's another ship at a pier:

The door in the side is open, so they're loading or unloading: 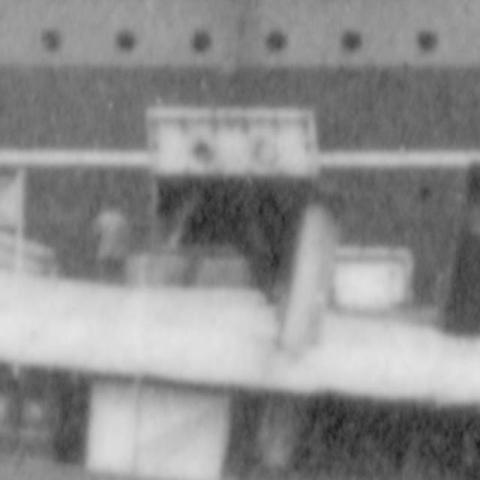 Next along we come to Blake Pier [8] with its long roof:

It was different from the previous two, a public pier instead of one that belonged to a shipping company. If you were catching a small boat out to a liner in the harbour, there's a good chance you'd leave from here.

Now at this point I usually mention how the pier's roof still exists, and has been relocated to Stanley. But for the first time I've realised that's only partially true - literally!

I count twenty pillars along each side in the old photo, but only twelve in this view of the relocated roof in Stanley:

What happened to the other eight pillars?

Next we have the Star Ferry pier [9]

With its distinctive clock tower: 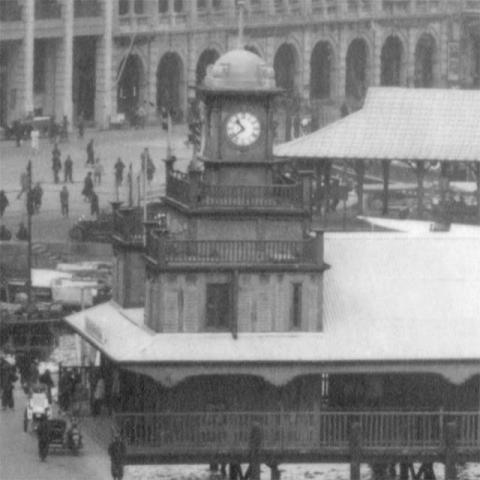 And the Meridian Star just arriving from TST: 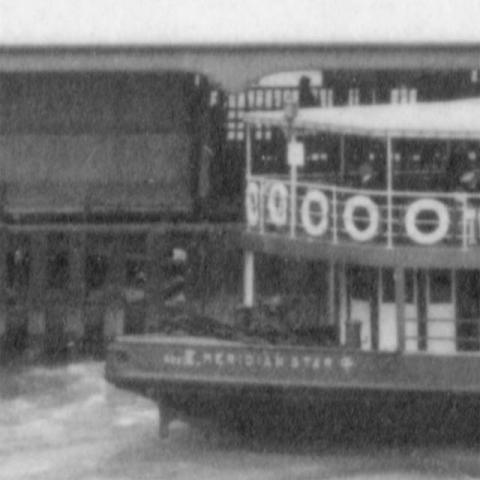 Before we reach the last pier, we pass these small boats: 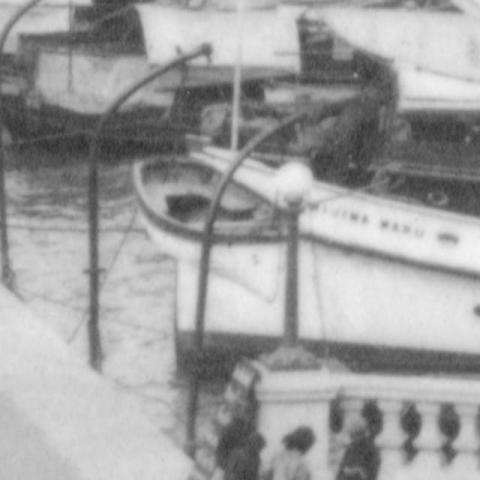 Old photos show several pairs of these curved poles along this section of the seafront, often with a small rowing boat suspended from them, like we see here. Can anyone tell us more about them? Were they owned by companies, or rented? And what were the little boats typically used for?

Just to the right we can see the bow of a larger boat, with the Japanese name "?????jima Maru". Would this launch have lived permanently in Hong Kong, or did it belong to a larger Japanese ship moored somewhere out in the harbour?

I'd previously thought this was reserved for visiting bigwigs - royalty, governors, etc. But this photo suggests that when it wasn't needed for grand occasions, it was also available for public use. The first clue is the Kowloon Dock Ferry, down in the bottom-right corner of the photo: 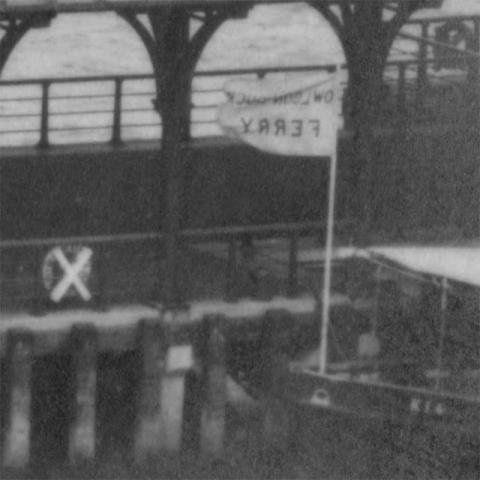 Second there's a note on the back of the postcard: 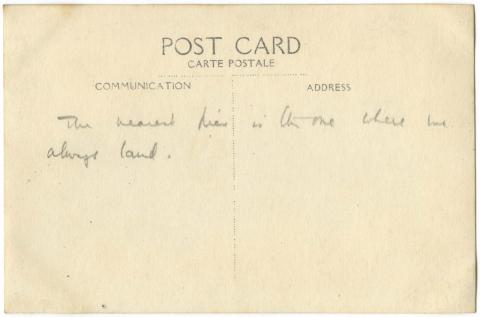 Whoever bought it wrote:

The nearest pier is the one where we always land.

So it looks like launches to and from boats in the harbour used Queen's Pier as well as Blake Pier.

Who: There's a group of people around Queen's Pier: 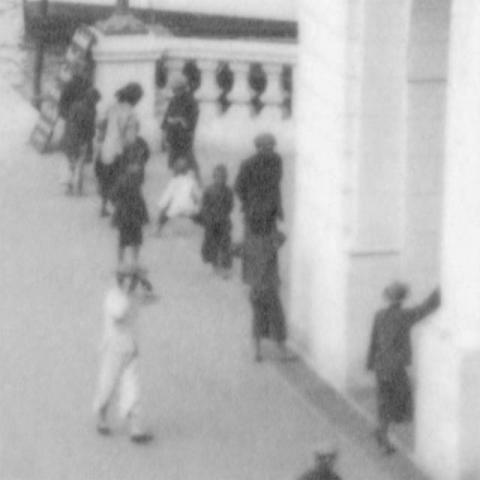 Up in the top-left corner there is a sign board leaning against the Pier's wall. Unfortunately it isn't clear to read at this angle, but I can imagine it offering boat trips.

Further along the street are a couple of sailors who look to be walking towards Queen's Pier: 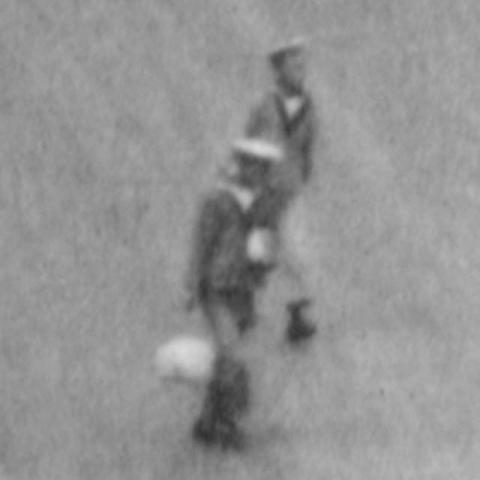 Can anyone identify their uniforms?

Further along again is the rickshaw rank: 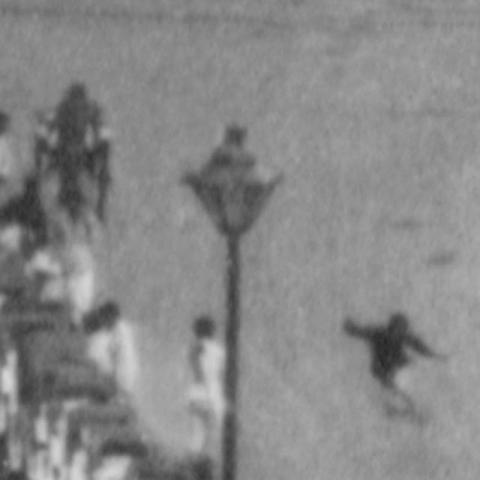 Apart from the rickshaw pullers waiting for a customer, on the right is someone looking very energetic. It reminds me of Singing in the Rain!

We'll finish off in the bottom-left corner, with this dapper gentleman in his plus fours: 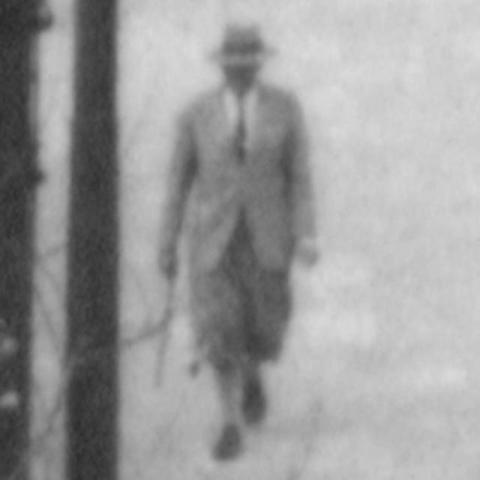 Perhaps he's heading to the Hong Kong Club? He's a bit early for lunch, as the Star Ferry's clock shows it is only 10:40am... 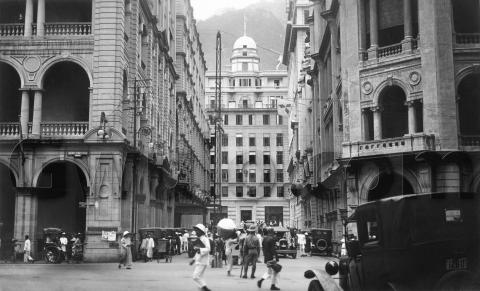 There I wrote he'd have landed at Blake Pier, but now we know he landed at Queen's Pier instead.

Thanks Moddsey, you have a photo for every occasion!

Moddsey has also identified the white launch with the Japanese name as the "Tomijima Maru" (see http://gwulo.com/comment/30589#comment-30589).

On that same page Franky describes the curved metal poles, also visible in the 1929 photo above. He writes:

The picture with the boat hanging on the poles are in fact quadrantle davits the same type as on British Men of War.  Each davit holding the boat can be turned 180 degrees, first one davit then the other thus bringing the boat to hang over the quay side and lowered onto the ground or water line if so desired.  The boats may well be used to row to anchored or moored ships in the middle of Victoria Harbour.  Another suggestion is that they could be life boats. Not of chinese design nor Royal Navy due to the seating configuration.  Possiby four oarsmen and a Coxswain to man the craft.

Firstly, thanks for a fascinating photo and an article full of detailed analysis.

You queried whether the ship moored at Douglas Pier belonged to the Douglas Steamship Co. Ltd? As you've already noted, no company badge can be seen. However, her funnel is painted in what appears to be one plain dark colour. According to www.theshipslist.com/ships/lines/douglas.shtml , the Douglas Steamship Co.'s ships sported plain black funnels, so the ship in your photo may well have been one of theirs.

You've dated the photo to 1925. At that time the Douglas Steamship Co. Ltd. regularly advertised its services in the Hong Kong Telegraph (and probably other newspapers, I didn't look). Checks of a number of editions on random dates in 1925 reveal the company was operating three ships that regularly docked in Hong Kong, namely the steamers "Haining", "Haihong" and "Haiching". The company may have had other ships that also visited Hong Kong, but these three seem to have been the regulars and so more likely to be in your photo.

The website mentioned in para.2 gives more information about each of the three vessels.

S.S. Haining started life as the "John Englis" but her name was changed numerous times including to "USS Relief". Images of her as the "John Englis" at www.allposters.com/-sp/S-S-John-Englis-1897-Posters_i4252152_.htm , and as "Relief" at www.en.wikipedia.org/wiki/USS_Relief (click USS Relief 1896) , show a vessel with completely different lines to the one in your photo. Although "rebuilt" and renamed Haining in 1923, I doubt her superstructure would have been completely reshaped, so I think it's safe to say she is not the ship in your photo.

"Haihong" was built as the "North Lyell", under which name there's a good photo of her at www.tynebuiltships.co.uk/N-Ships/northlyell1899.html . Although there are similarities between her and the ship in your photo, they're not identical. For instance their funnels are quite different. However, the two photos were taken about 25 years apart so perhaps some changes would be expected even if they are the same ship.

The S.S. Haiching retained the same name throughout her existence. There's a painting of her at www.commons.wikimedia.org/wiki/File:SS_Haiching.jpg . Again there are similarities, but differences too between the painting and your photo. She suffered serious damage during a piratical attack in 1929. The top left photo at www.gwulo.com/atom/13815 shows a cargo door in roughly the same position on her side as the ship in your photo. Subsequently she was rebuilt and appeared in the 1940 Harrison Forman photo at www.gwulo.com/atom/18481 . Again differences may be explainable by changes at the time of rebuilding and the 15 years between the photos.

On balance I'd say the ship at Douglas Pier is one of the Douglas line steamers, and if so is more likely than not to have been either the S.S. Haihong or S.S. Haiching.

Thanks to you both for the extra information. The ship in the original photo does look very like the SS Haiching, so I'd say it's most likely to be that ship or possibly a sister ship of the same design.

Well done for spotting the shortening of the Blake Pier Pavilion. I hadn't noticed it before, but it seems so obvious now you've drawn attention to it.

There's a good account of the Piers history in the Paper accessible by clicking the link at "References 1" at www.en.wikipedia.org/wiki/Blake_Pier_at_Stanley . The page numbers quoted below refer to the Paper.

Firstly, from Page 98, "There is no authentic and reliable record on the (original) design of the Pavilion as the record kept in the Architectural Office was lost during the Second World War". Assuming the photo at www.gwulo.com/atom/12657, and your photo above, show it in its original form, it consisted of a central roof with matching, sloping gables at each end. The roof was supported on posts, probably four at each end and in pairs along its length. Although it's difficult to say for certain, after studying your photo I'd say there were 19 rows of posts, consisting of 17 pairs plus one row of four at each end.

Page 102 of the Paper disagrees with my figure of 17 pairs, saying, "The Pavilion consisted originally of 16 sets of structural steel main plain trusses... supported originally by two...cast iron posts". If 16 is correct, then adding one row of posts at each end to support the gables, would give a total of 18 rows of posts. No matter how hard I look at your photo I can't see as few as 18.

Moving on. One of the sloping gables was damaged during WWII leading to its removal in 1948 (Page 97). The Pavilion without the sloping gable at its north end is seen in www.gwulo.com/atom/12660.

The Pavilion was dismantled in June 1965 as part of harbour reclamation work, stored in Ta Kwo Ling, then rebuilt in Morse Park in 1966 as seen in www.gwulo.com/atom/18541 and www.gwulo.com/atom/12790 (bottom right photo). One sloping gable was still missing, but the Pavilion was significantly shorter as the number of rows of posts was reduced to 11, consisting of one row of four supporting the remaining sloping gable and 10 pairs along the sides. "In the relocation works of 1965, ten sets of main plane trusses were preserved...and the cast iron posts were replaced" (Page 102).

When the Pavilion was again moved to Stanley in 2007 the long missing sloping gable was replaced, giving todays Pavilion 12 rows of posts (1 row of 4 at each end plus 10 pairs along the sides).

To summarize, the Pavilion has stood in three locations in four different forms;

1. In Central, in its original elongated form (16, 17 or 18 main plane trusses depending on who's counting), with;

3. From 2007 to the present in Stanley in the shorter form but with two sloping gables.