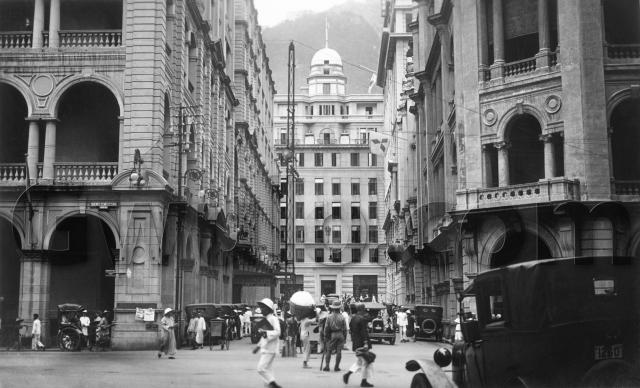 Where: We're looking south along Pedder Street, from the junction with Des Voeux Road Central. Here's how it looks today:

When: The buildings can help us work out the date this photo was taken. 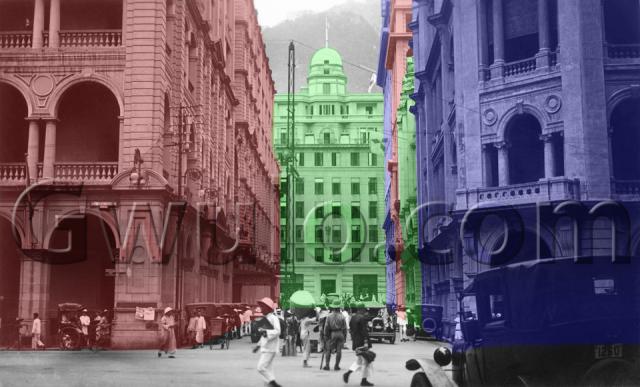 To identify the buildings, see this page:

From left to right we have:

This photo was taken after the completion of the Asiatic, China, and Pedder Buildings in 1924, but before the Hotel fire of 1926. I'll guess 1925 as its date.

Who: Look at this group of people over on the left of the photo: 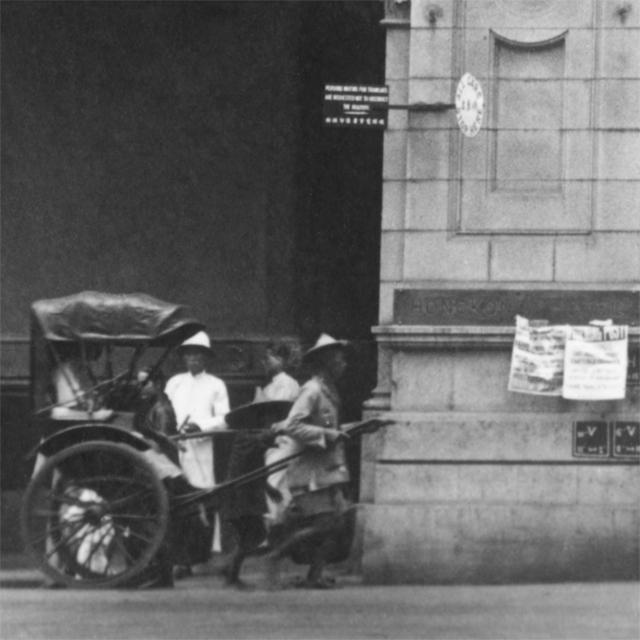 Jogging along the street there's a rickshaw puller, and a smaller figure behind him carrying a load on a shoulder pole.

Back on the pavement the people are standing, probably waiting for a tram as the round sign above them marks a tram stop, "All cars stop here": 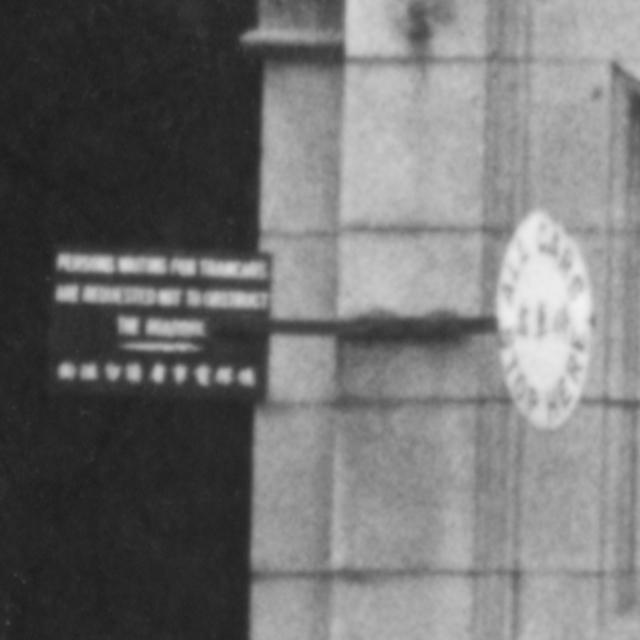 I think the encircled words are "ALL CARS STOP HERE" same as the attached one but different Chinese words in the centre. 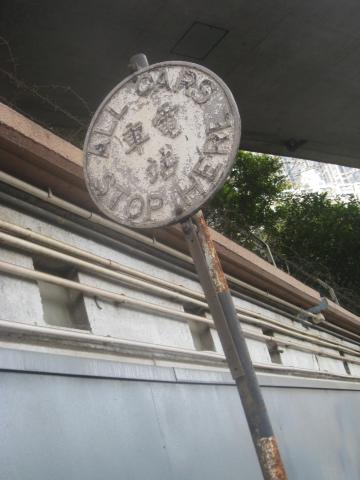 The hotel doesn't look too impressed with the idea of having tram passengers standing in their arcade though. Their notice on the left reads:

Passengers waiting for tramcars are requested not to obstruct the passage.

Towards the centre of the photo are these people: 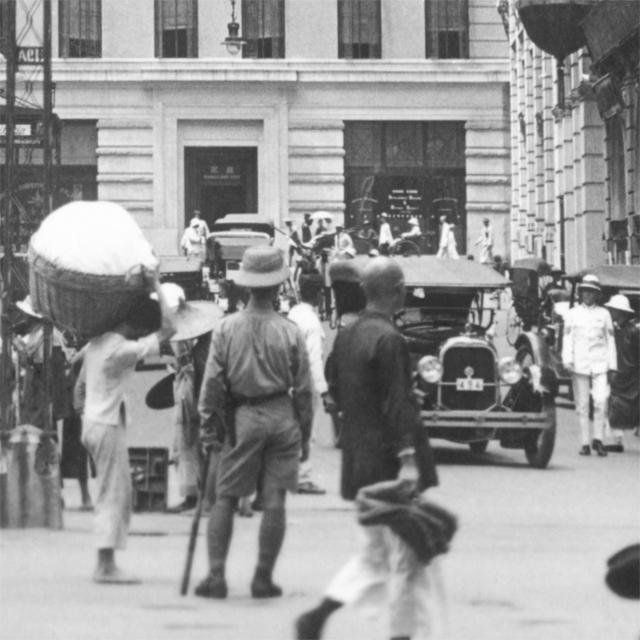 The man with the large basket on his shoulder looks as though he might be delivering the laundry. To his right is the first of two policemen in this view. He's got his back to us, and appears to be holding a striped stick - something to do with traffic control perhaps? Over past the car is another policeman, this one wearing a white uniform with what look like sergeant's stripes on his arm.

What: The cars in the photo have low registration numbers, marking them as early cars in Hong Kong. In the bottom-right corner is number 1260, while the car in the previous view is even earlier, number 494: 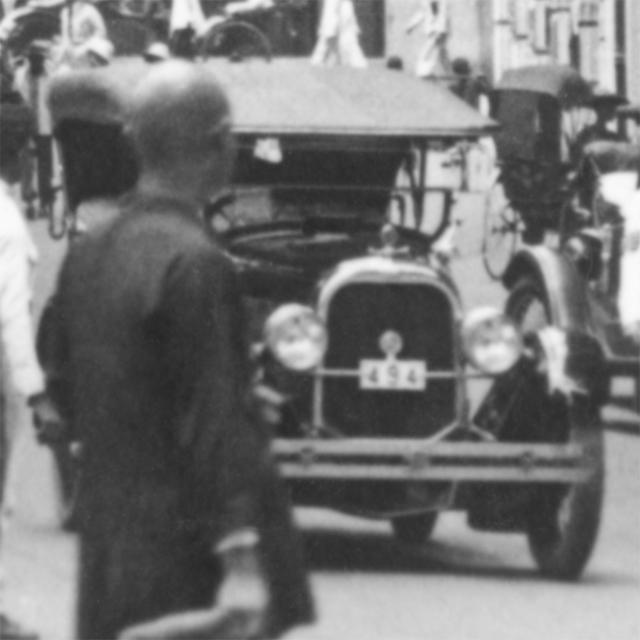 The other thing that caught my eye is this, sticking out from the 2 Pedder Street building: 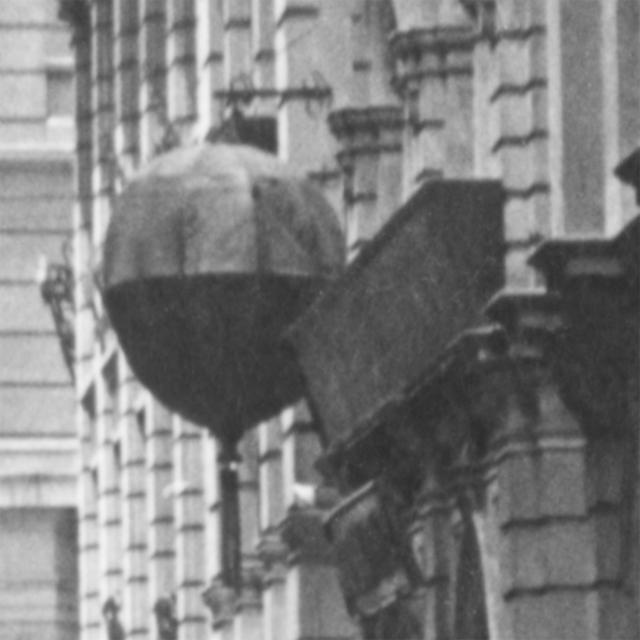 It looks something like a lantern. Does anyone know if it was just for decoration, or if it has any meaning?

If you spot any mistakes, can add any information, or have a question, please leave a comment below.

This picture was printed as a photograph (that's why the details are so sharp), but sold as a postcard. Who ever bought this jotted down a note on the back: 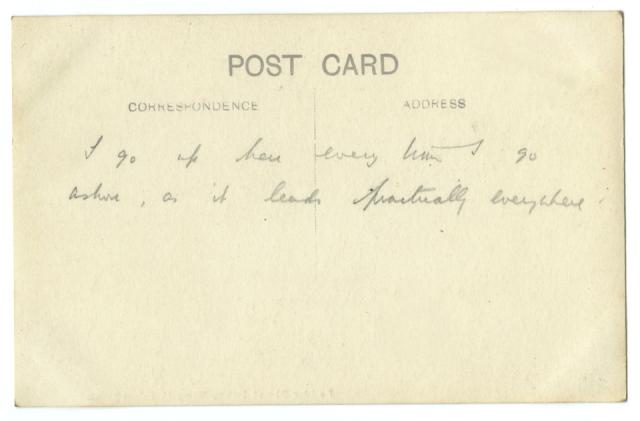 Back of this photo:

"I go up here every time I go ashore, as it leads practically everywhere."

It sounds as though they lived on a ship when they visited Hong Kong, and made regular journeys to and from Central. Their launch would have brought them to Blake Pier [9], at the northern end of Pedder Street.

It seems the police in those days were much better at preventing  illegal double parking of cars in Central. Perhaps we should bring back the European Sergeants with their big sticks.............. ?

Fascinated by the way you analysed & deduced all the information from that old photo of Pedder St & adjacent bldgs. Made me appreciate my own copy of that photo all the more. So Pedder Bldg's 90 yrs old this year. Is there an illustrated commemorative book coming out that you know of? And who was this William Pedder that it was named after?

I note that from detailed Govt maps, China Bldg was 2-10 Pedder St, Pedder Bldg is 12-12A, Jardine House Annexe was 14-16 fyi. I have no idea what that lantern object could be other than to serve as advertisement for a restaurant upstairs.

But who could forget what happened on Double Tenth 1990 when a row of 12 gargoyle masks on the 1/F of Pedder Bldg suddenly keeled over at about 10.50am crashing onto the street below but injuring no one. The remaining masks were also removed as a precaution.

I don't know of any commemorative book coming out. I wonder if the owners have anything in mind?

William Pedder was the first harbourmaster. There is some more about him in this thread:

Thanks for the street numbers, the road would have been re-numbered sometime after China & Pedder Buildings were finished. Please could you let us know the date of the map you're quoting from?

I could scan the map for you

I could scan the map for you which I removed from a HK Land annual report but I don't see any date mentioned. It was originally a large scale HK Govt street map.

Yes please, a scan of the map

Yes please, a scan of the map will be good to see.