With typhoons and hurricanes in the news recently, here's a photo of one that made the news just over 90 years ago. 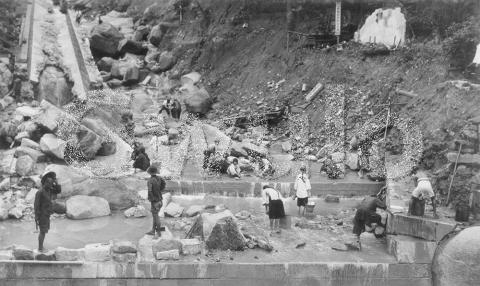 When: The title gives us the date, 1926. We can do better than that, as the photo must have been taken shortly after the great rainstorm hit Hong Kong on the 19th of July, 1926. The heavy rain started around midnight, and carried on til midday. Even today it holds the records for Hong Kong's highest 6-hour and 12-hour rainfalls, at 430.6mm and 526.7mm respectively. [1]

When I looked up that day's newspapers, I wondered if I'd made a mistake with the date. The 19th July issue of the Hong Kong Daily Press [2] hardly mentions the weather at all - just a half column on page 3, saying how lucky Hong Kong was to escape the typhoon when it veered east towards Shantou.

Of course, though Hong Kong missed the typhoon's strongest winds, it was the rain that would do the damage. Though it was missing from the first newspaper, the Hong Kong Telegraph [3] for the same date did catch the story. Its front page headlines read:

These two very different reports are likely caused by two different editions of the papers ending up in the archive - the early, pre-rainstorm edition of the Daily Press, but the late edition of the Telegraph written after the flood's effects had become clear.

What: The title of the photo refers to a nullah that has been swept away. The word nullah comes from India originally, where it means a "watercourse, riverbed, or ravine" [4]. In Hong Kong we use it to describe the man-made channels built to tame Hong Kong's old streams, and hopefully contain them when they're swollen by the summer storms.

In the competition between stream and nullah, it's clear to see that in 1926 the stream won! The remains of the nullah run down the left side of the photo, but its top and bottom sections had been swept away. 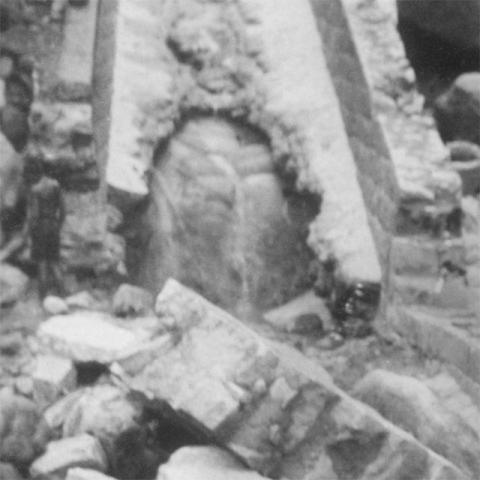 As the nullah on the left was overwhelmed, the water found its own path down the valley. As it carried away rocks and soil it cut away the bank on the right, demolishing a hut and a pipeline so that just the back wall and a stub of pipe remain. 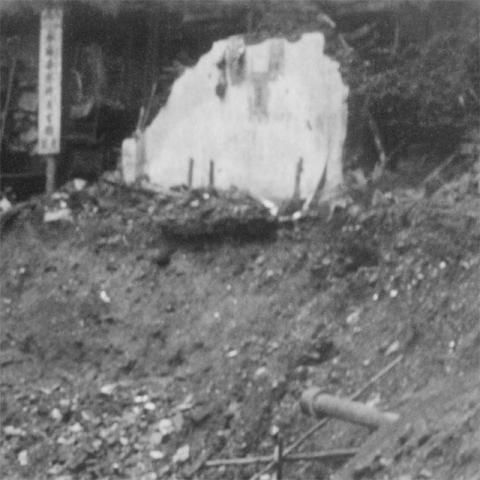 Where: [CORRECTION 18 Sep 2017: The nullah in this photo is the one above Hill Road, not the Albany nullah. Please see the comments below for details.] The Telegraph article mentions the nullah and its location:

"Water fully six feet deep flooded Queen's Road nearer to Wanchai, as the big nullah which passes down by the side of Murray Barracks burst its sides."

You can see the nullah shown as a pale blue line running in a 2 o'clock direction below the Murray Barracks on the 1945 map we looked at last week [5]. The newspaper just calls it the 'big nullah', but its proper name was the Albany nullah.

As to which section of the nullah we're looking at, I'm not 100% sure. The slope doesn't look very steep though, so I guess it was one of the lower sections. If you have any other photos of the Albany Nullah that show this section and its surroundings, please could you upload them for us to see?

Who: I can see three different reasons the people were at the nullah when this photo was taken.

First, to collect water. The young man on the right is filling up a couple of tins with water, then he'll carry them away on the shoulder pole that is propped up against the slope. 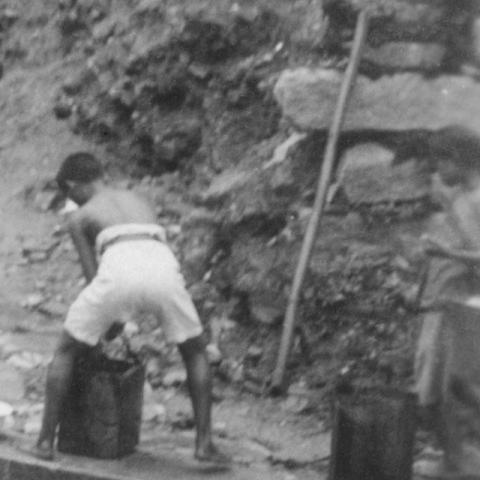 The second, and largest, group of people are at the nullah to do their laundry. 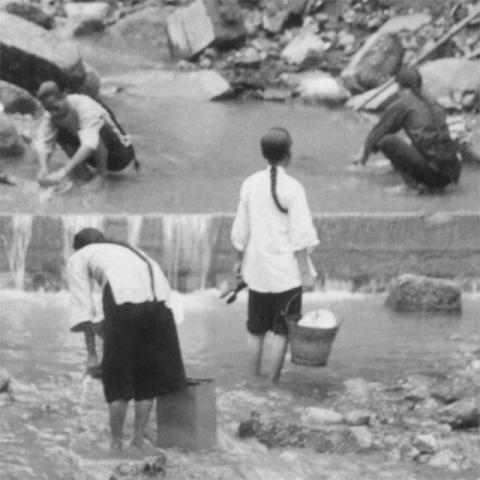 Third, over on the left are two men who stand out for being the proud owners of hats. Here's the one on the left, 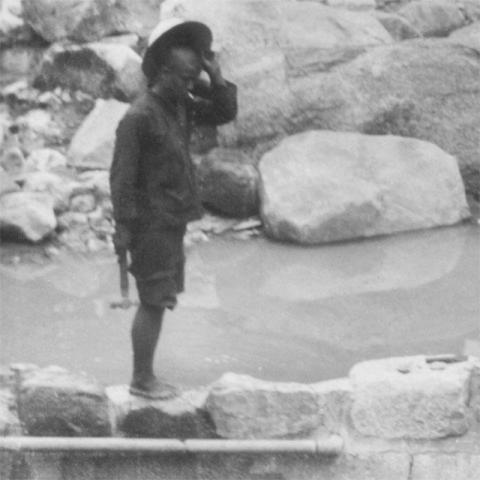 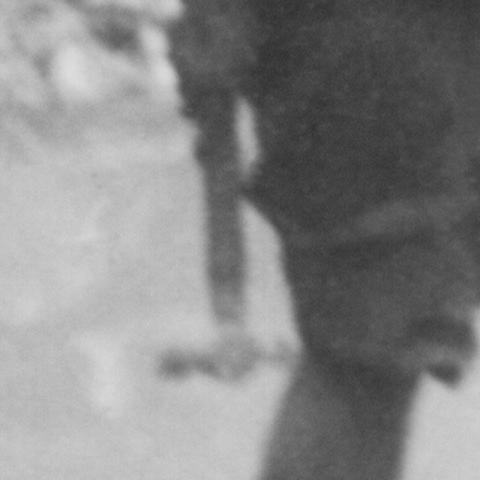 At first glance it's hard to imagine what use that little hammer will be, given the scale of the project that will be needed to repair the damage to the nullah. But maybe he's got a smaller job in mind. Following his line of sight, he's looking down at a pipe that emerges from a low wall that's been built along the ridge of the weir. In the 1920s, water from streams and nullahs was still used by Hong Kong's households for tasks such as flushing lavatories. He may well have been sent along to get that flow of water working again.

Trivia: Where's the nullah today? When a rainstorm hits modern Hong Kong, all that water still has to flow somewhere. The nullah still exists, but it has been covered over so it is hidden from view. If you look at the route of the nullah on the map again [5], you can probably spot where it's gone to.

When Albany Nullah was covered over, Cotton Tree Road was laid on top of it. So next time you drive up there on a rainy day, spare a thought for the torrent of water running along beneath you, and cross your fingers the nullah wins.

17 Sep 2017 - Thanks to Martin for pointing out I'd written the wrong units in the rainfall records: "Your record rainfall measurements sound rather harmless - about a pint of rain in 12 hours?  Could've been lapped up by a small dog. You surely mean "rainfalls, at 430.6mm and 526.7mm" - millimetres, not millilitres.  That is indeed a lot of water." I've corrected the units to mm.

The photo shows the Nullah looking south from Hill Road, rather than the Albany Nullah. The National Archives has an almost identical photo on their flickr page, shown top left below:

The 1926 rainstorm was extremely destructive. There are 42 photos on the National Archives flickr page showing the destruction around Hong Kong. The rainstorm led to the demolishing of the original Wongneicheong village due to flood damage as well as landslides all over Hong Kong. More information on one of the landslides is here

Here are the other NAtional

Here are the other NAtional Archive photos showing damage from the Rainstorm:

More pictures from the

More pictures from the National Archives here, including many duplicates of the above

Thanks to Herostratus, and Moddsey by email, for identifying the correct nullah in the main photo, and for a couple of readers who wrote in to note I'd given the rainfall figures in ml, when of course they should be in mm. I've updated the notes above.

The photo that identifies the nullah is at top-left on the UKNA page: 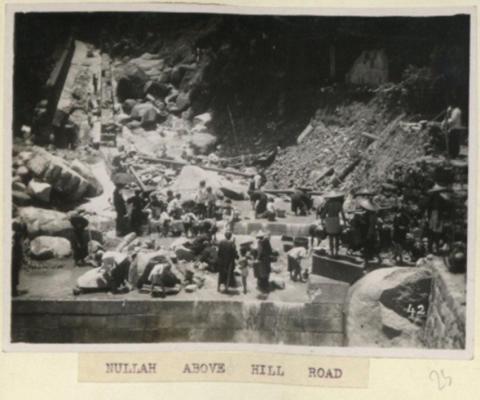 At West Point things are in a indescribable state of confusion, one big nullah being badly damaged and choked with stones and earth.

When this nullah became blocked, the water overflowed and undermined a nearby house. 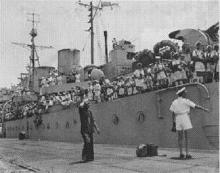