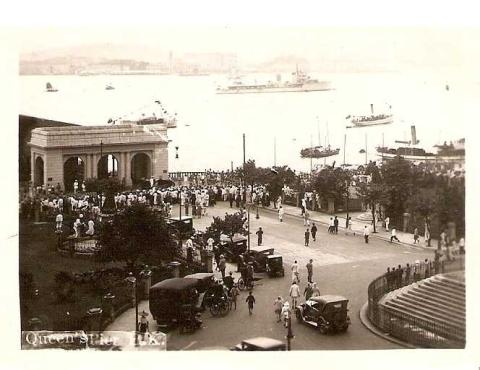 In the debate over the recently demolished Queen's Pier, I've always wondered why we should not bring back the earlier one, shown here - that has actually has architectural merit. 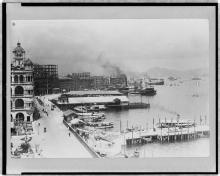 I've added in a map to show where it used to stand, and also added completion/ demolition dates from the AAB paper entitled "A Historical and Architectural Appraisal of Queen's Pier, Central". (Link from this Wikipedia article. about Queen's Pier).

A second Queen's Pier was built in front of City Hall.

Mentions of construction in the annual PWD reports

Reconstruction of Queen's Statue Wharf.—The question of the best means of providing facilities opposite Statue Square for landing from, or embarking on, launches, and small craft generally, was referred to Sir Maurice Fitzmaurice, C.M.G., during his visit to the Colony in connection with the Improvement and Development of Hongkong Harbour in November, 1920. Schemes of Piers and Wharves were submitted for his consideration. He recommended that the original proposal to construct a Pier at right angles to the sea-wall should be adhered to. The question was further considered by the Public Works Committee who, in July, recommended the construction of the pier as originally designed.

Of 80 re-inforced concrete piles varying in length from 60 feet to 68 feet required for this pier, and which will be moulded at the Government Quarry, Tsat Tsz Mui, 49 had been made by the end of the year. The old wooden wharf had also been removed and satisfactory progress made with the dredging and clearing for the foundations of the first row of re inforced concrete stanchions.

The actual pier was completed by the end of the year with the exception of the depositing of the concrete to form the. decking and a few very minor items of work.

Drawings were prepared for the structural steel roof and also for the facade to the Praya, which will consist of a carriage entrance with approaches flanked by a balustrade ; tenders were called for the latter towards the end of the year.

The construction of the re-inforced concrete pier and approach was completed by February.

The surfacing to the pier and approach has been suspended pending the erection of the facade to the Praya and roof to the pier.

A Contract for the construction and erection of the structural steelwork and C.I. columns for the roof was let to the Taikoo Dockyard and Engineering Co. in March.

By the end of the year, the standards and trusses complete, were in position and only required painting.

Owing to a settlement in the foundations of the new sea-wall, the Contractors were not called upon to commence building operations until 3rd December.

During the period of the delay, work was proceeding on the preparation of the stonework for the Entrance, and the concrete tiles for the roof of the pier proper were being cast at the Government Quarry.

The progress on the contract for the construction of the Entrance was most unsatisfactory, and work thereon was suspended on several occasions owing to financial difficulties between the Contractors and the masons.

By the end of the year, the stonework was built up to the main cornice, while the cast concrete tiling for the roof of the Pier was practically completed.

The Entrance etc., were completed, and the Pier opened to traffic in June.

Soon after the pier was opened in mid-1925, the changeover of governors gave it a chance to show off its use as a ceremonial pier. The outgoing governor, Sir Reginald Stubbs, left from the pier on 31st October, 1925. The next day, the new governor Sir Cecil Clementi steped ashore here.

Queen’s Pier, some twenty hours after the departure of Hongkong's late Governor, Sir R.E. Stubbs, K.C.M.G., was the scene yesterday morning of the welcome of the new Governor, Mr, Cecil Clementi, C.M.G., who twelve years previously left here after thirteen years’ service in many capacities, including that of acting Colonial Secretary.

Decoration of plants and ferns hung from the Pier which was carpeted in .crimson its whole length. His Excellency upon arrival by the “Victoria” which, conveyed him from the s.s. "Kalyan” was introduced to the members of the Executive and Legislative Councils, the Judges, members of the Civil Service, the Consular Body, representatives of the Navy and Army and leading residents of the foreign and Chinese community who were assembled on the pier. This occupied a quarter of an hour during which time a throng of the general public at the foot of the pier had the oportunity of observing the new Governor of Hong-Kong.

His Excellency proceeded to the Council Chamber by motor car accompanied by Sir Claud Severn, the route from the pier, up Wardley Street, through the Square and up Garden Road being lined by troops from the Punjabis Regiment on either side of the roads.