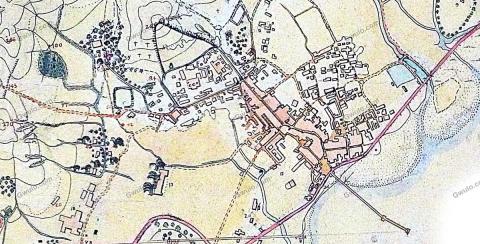 The latest addition to Gwulo's collection of maps is one of Kowloon from 1903.

If we compare its view of Tsim Sha Tsui with a couple of other maps on Gwulo, it seems this is a poor addition to the site, looking rather smudged, and without much text to tell us what we're looking at: 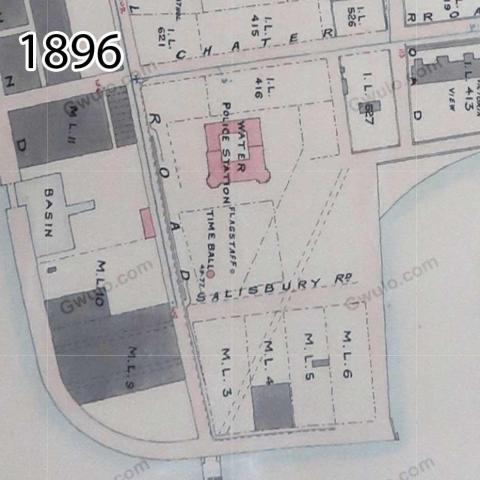 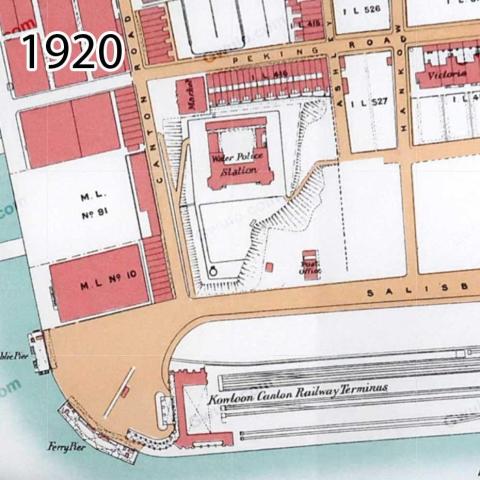 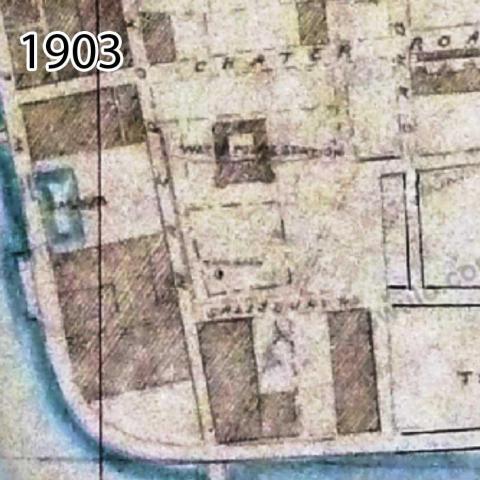 But the 1903 map does have two important benefits for us.

Here's a section from further north up the peninsula, showing the area around today's Mong Kok. You'll see the 1903 map is a composition of two different sheets, and fortunately the second sheet is much sharper. This section also shows one of the benefits I have in mind - can you spot it? 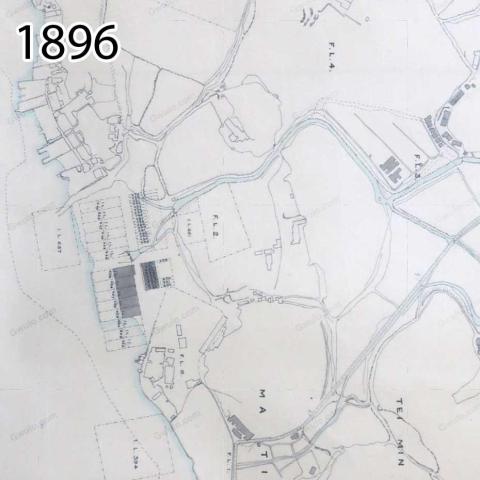 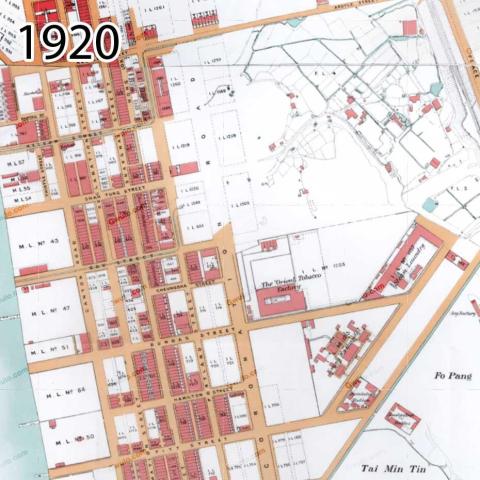 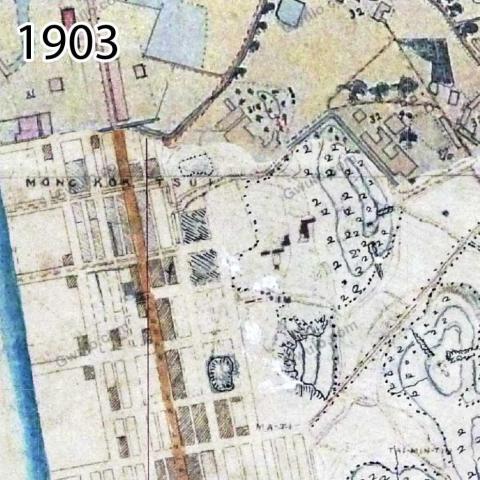 One of my current fascinations is the changing shape of the ground in Kowloon. The new map gives us a couple of good examples - here's the section around modern-day Ma Tau Chung, Ma Tau Kok, and Ma Tau Wai. 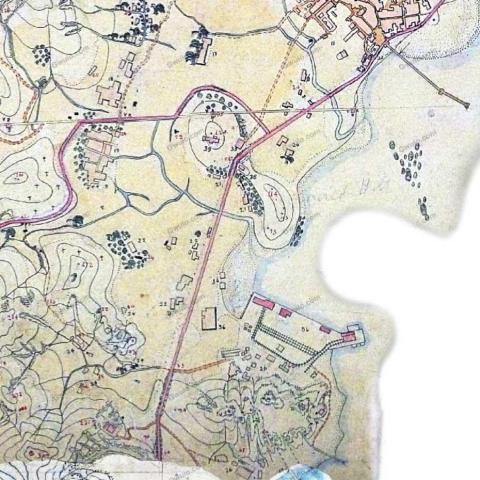 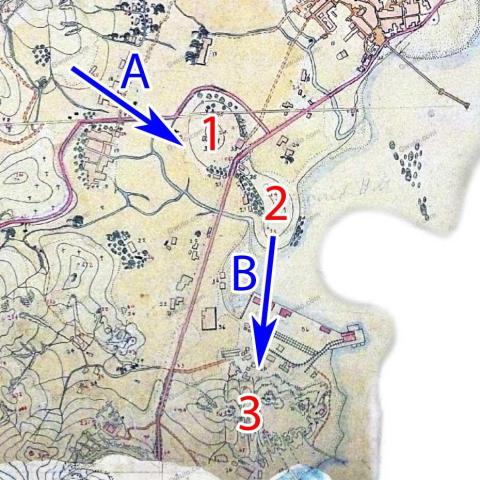 Here's another photo of the area that shows view B. The photographer was standing on Sacred Hill, looking south across farmland towards a very jagged-looking hill number 3.

Don't feel bad if you're struggling to work out where these hills are today. The map below shows their location on a modern map, but if you walk there today you won't find even the slightest incline to give you any hint of where the hills once stood. They've been excavated and completely removed, leaving perfectly flat land behind. 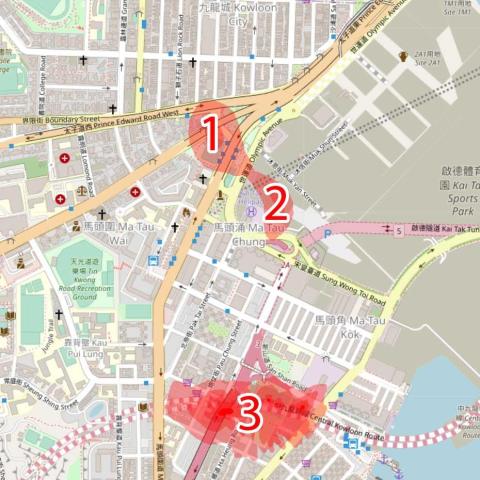 To show the the second benefit of the 1903 map, here's a comparison of the area each map covers. 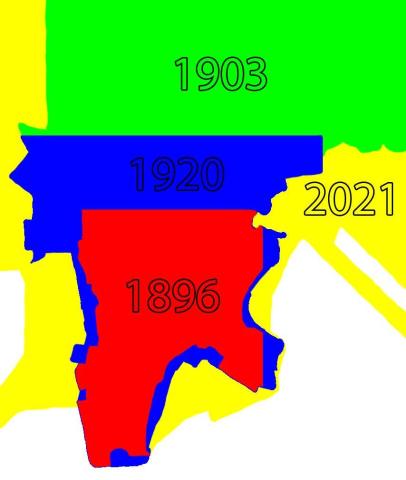 The 1903 map extends much further north and east than the other two old maps. That caught my attention because it's the first of the maps that covers where I live, San Po Kong. Here's the area I walk around several times a week. 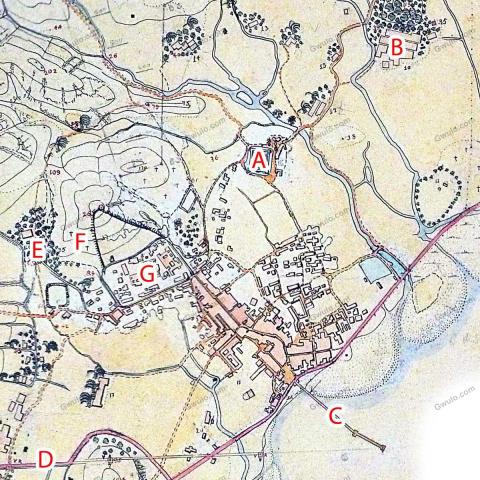 Much of the history of this area was erased by the expansion of Kai Tak airfield during WW2, but there are still traces of several of the items shown on the 1903 map:

The work to produce this map is described in item 48 of the PWD's annual report for 1903: Survey of the New Territory. It notes there was a large group of men working on the project:

The staff engaged upon this portion of the work in the early part of the year consisted of 1 Inspector, 24 Surveyors, 32 Indian Chain-men and about 45 Chinese coolies, [...]

And that in total they'd produced 557 sheets, drawn at 32 inches to the mile.

I photographed the map seen above in 2011, on a visit to the UK's National Archive. Their reference is MPH 1/149, dating the map to 1903 with the description:

It's a much smaller map then 557-sheet monster described above, so I think the National Archive's copy is a reduced copy derived from the original.

The team of men that surveyed the land included "32 Indian Chain-men". They used a metal chain, known as a Gunter's Chain, to measure distances. Each Gunter's Chain is a standard 66 feet in length. This length became known as a 'chain', and is a common unit of measurement in older British documents.

Modern measurements in Britain use the metric system so the chain has fallen out of use, unless you play cricket! The wickets on a cricket pitch are exactly one chain apart.

Returning to the map, I noted several items that deserve further investigation:

Sorry, no clue what this really was.

P.S: Great achievment, will surely give valuable information about Kowloon (e.g. European House at the New Kowloon City Road [c.1900-????] which I could update already) 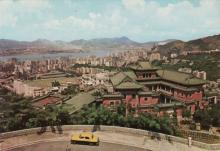