As we start the year of the dog, what do we have on Gwulo about the history of dogs in Hong Kong?

The earliest mention is from a Lane Crawford advertisement in 1879, where they offered "dog collars and chains" for sale.

The most recent comes from an outing in 2010. I was searching for more of the old wartime stoves behind Quarry Bay, and noted a warning sign: a python had been seen in the area and I should look after my dog and small children.

In between we've got a selection of photos showing owners and their pets over the years:

A couple of pets were witnesses to history. This first group look very relaxed, but they're actually sheltering from the Japanese attacks on Kai Tak at the start of the fighting in 1941.

A few days later a Mrs Lee was brought along as part of the Japanese "Peace Mission" that sailed from Kowloon to Hong Kong island to request the British surrender. She insisted on bringing her dogs with her, Otto & Mitzi.

After WW2, we have photos of a couple of police dogs, the first with the civilian police and the second with the RAF police.

We finish with two colour photos. This 1958 photo shows the remarkable blue dog who lived at the Temple of 10,000 Buddhas near Sha Tin.

While in the late 1960s it was the "yellow running dog" that made the news, immortalised in Eric Cumine's tie design:

If you can add any photos or stories about dogs in Hong Kong, please let us know in the comments below.

I'll finish with a wish that you have a happy and healthy year ahead. 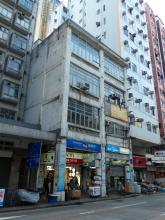