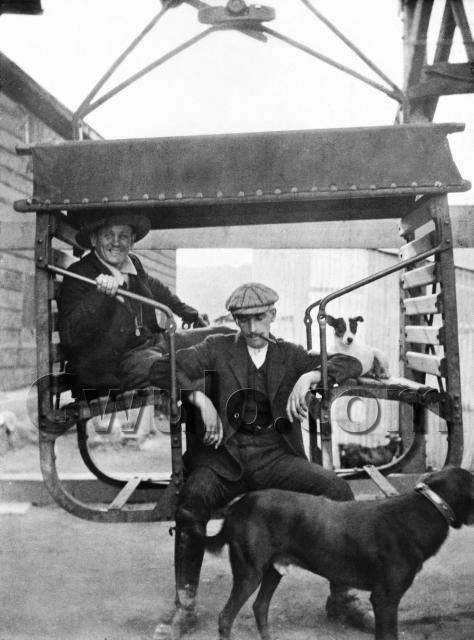 What: The photo has this caption:

An "aerial ropeway" is what we call a cable car today. I can't read the next two words, but "K. C. Rly" means the Kowloon-Canton Railway, commonly known as the KCR.

Where: We know there was a ropeway in operation near Beacon Hill, while the Beacon Hill Tunnel was being dug. It transported miners between their camp and the site. [1]

When: Here's a timeline for work on that tunnel:

The ropeway was in use during the construction phase, so I'll guess the photo was taken in 1908.

Who: I believe these are two of the Italian miners who worked on the project. [1] 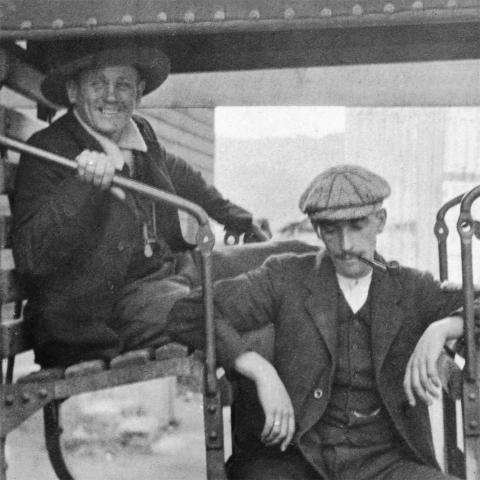 Initially all the senior miners had been brought out from Britain, but that wasn't very successful. The report on progress for 1908 says:

"It was found difficult to obtain good foremen: those sent out from Home though they knew their work well were often troublesome to deal with. The cost of getting them out from Home made it possible for them to behave very badly before they could be dismissed and they in many cases took full advantage of this." [4]

A group of Italian workers were then employed. They'd recently finished working on a railway construction project in Yunnan province, southern China. It meant they had the relevant experience, and didn't need to be brought out from Europe.

They were praised in the speeches that followed the celebrations of the tunnel breakthrough [2]:

"[...] Mr. Waite proposed a toast to the miners. He had never worked with a better lot of men, he said, men who knew their work, and did it well. He did not speak of the British miners alone, but also of the Italians whose expertness in machine drill work, if equalled, could not be excelled."

They probably should have stopped there, but after "a jolly tiffin", Mr Eves also took a turn:

"Many English people think that Italians are a dangerous sort of people to meet as they think they always have a knife somewhere concealed about them ready to stick into one, but I can contradict this most flatly. A more law abiding and quiet set of men than Mr. Ghella [5] and his fellow men here I think could not be found anywhere."

The knife references were overlooked, and Comm. Volpicelli (Italian Consul in Hong Kong) gave a short speech of thanks, ending by:

"[calling] upon the Italians present to charge their glasses and drink the health of the railway staff. The toast was honoured with many 'vivas', and as the toasters resumed their seats the store rang with loud applause."

If you know can tell us any more about this ropeway or the miners, please let us know in the comments below.

And I'm sure I've read a contemporary account of the KCR construction project which gave more detail of the ropeway and camp. But... I can't find where I've saved it, or find it again on the web. It wasn't an article in the newspapers or one of the Hong Kong government's annual reports. I think it was in an engineering publication. Can anyone point me in the right direction?

Re: Caption of Photo

Perhaps "Kang Hau". There is a Ha Keng Hau Village in Shatin, north of Lion Rock.

Thanks Moddsey, and also thanks to Peter and James who wrote in by email to mention Ha and Sheung Keng Hau Villages. One way to translate Ha and Sheung is "lower" and "upper", but from the map they're both at about the same level, and sit right next to each other. I guess they were the nearest named landmarks, so the railway workers referred to the area around the north portal as "Kang Hau".

Thanks to Bob who sent the names of those contemporary accounts I was thinking of:

I couldn't find the first online. The second is online, but asks for USD90 to read the whole article! (The "Discussion" section of the second article is available free of charge, and worth a read).

Bob also notes the railway was also known as the "Canton-Kowloon Railway", and that a Google search for the phrase turns up some other interesting pages.

IDJ chipped in with some extra resources:

The Graces Guide site has a number of interesting Hong Kong items listed, but not seemingly the CKR/KCR in my search.

The site below briefly mentions the Taikoo aerial ropeway and the steel rope supplier 'Bullivant,' of Millwall London, a company that still seems to exist. This web extract is from a book I have that was published at the beginning of the 20th century but is not dated.

The Graces Guide is new to me, and browsing through it I noticed they have several issues of "The Engineer" available. Luckily they have the copy that Bob mentioned (see pages 428-431). It's a good read, and also has several pictures taken around the construction site.

The discussion about the location of the ropeway continues over on this thread.

Thanks for everyone's help,

Recent status of the piers

Recently it's a popular route for some hiking groups, passing through those piers (not sure how to name this type of structure) beneath Richmond Villa (where the mysterious foundation stone was found, only the names of a development co. and Imperial Hotel were mentioned).

It's said to have almost 30 piers, but I only came across less than 20.

I am wondering why they are so close together?

Where were the others and the quarry?

Do you mean Ascot Villa?? I thought the foundation stone was in Shatin Heights? Richmond Villa is over by Che Kung Miu in Li Uk Tsuen.

Sorry, I've mixed it up with the other one.

Exact location of these stones?

Hi I am interested in knowing exactly where you have found these stone structures. Previously I have submitted to Gwulo photos of very much identical looking structures found near Block 18 of Woodcrest Hill (No. 8006 Tai Po Road) just behind the graves of my great grannies. Keen to know if there are any connections if your images are located elsewhere nearby. Thanks.

Yes, it's south of Woodcrest Hill, at a flattened ground just after we have climbed all the ladders.

Further up, when we were almost at Ascot Villa, there was an unlidded urn lying sideways on the ground, we wondered if that was for the bone ash.

I think we are looking at the same bunch of stones, but did you access the site via a flight of steps inside Woodcrest Hill?

Greetings!  No wonder they are good workers when their dogs are with them at work or play - https://gwulo.com/atom/30374  .

No, I just followed the tapes left by other hiking groups. They started from the Tai Po Road near the bus station called Keng Hau Road. 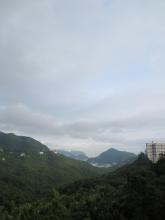