About 20-30 years ago, when postcards were still widely used, I had a deal with a friend that we'd send each other the least attractive postcards we could find: 1960s concrete shopping centres were a popular choice! This view from 1900s Hong Kong would have been a fine contender: 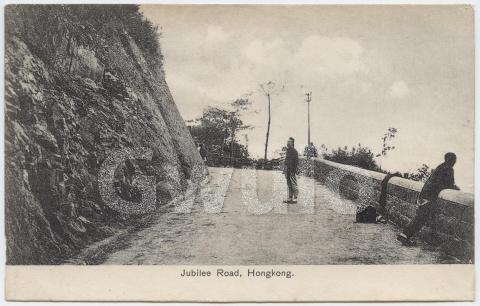 It's not obvious why a tourist would want this card, but Jubilee Road was actually a popular destination. Despite the unattractive card, in real life it was famed for its beauty. Here's a description from a 1924 guide book:

PERHAPS after the Peak, the Colony’s most famous sight, is the drive round the island. Leaving the city in a motor car, the visitor has three choices before him—he can go via Shaukiwan, via Pokfulam, or via Jubilee Road.

Although slightly longer, the last is usually acclaimed the prettiest. The way first lies through the western Chinese district. After the city has been left behind, the coast is followed. Added to the usual Hongkong beauty, is the sylvan setting, which often recalls an English country lane. The Jubilee Road converges with the higher Pokfulam Road some distance before Aberdeen is reached.

If the tourist followed the second route, via Pokfulam, the guide continues:

[...[ the visitor leaves the city via Garden Road which branches off Queen’s Road opposite the cricket ground. From Garden Road he turns into Caine Road; and after passing Government House, with its Indian sentries standing guard, he goes through the upper residential district and below the University situated some distance above. Leaving the city, the Road follows the contour of the Hog’s Back until Pokfulam is reached. Here the visitor will note the Dairy Farm Company’s green pastures; also the French Mission a castellated building with the publishing branch for issuing books, including dictionaries, in every Oriental language.

Our second postcard shows the French Mission's building, mentioned above: 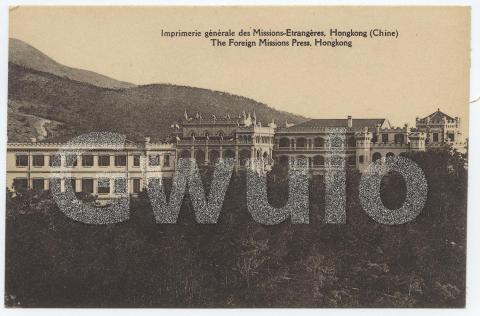 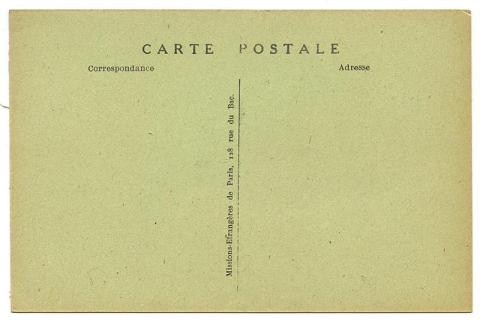 I guess this may be the only postcard of Hong Kong that shows the building where it was printed?

The guide book's third route took the tourist east from Central, heading towards Shau Kei Wan. On a warm day they might have stopped off at the "Beach of North Point" for a swim. 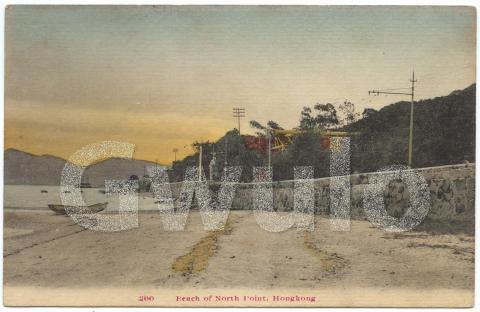 There's a note on the back - if you can read French, please can you help translate it for us? 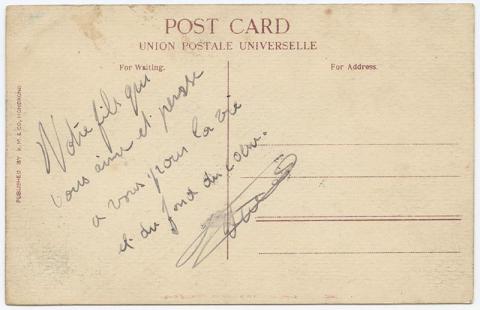 It's hard to imagine now, but at this time North Point was considered a recreation area. There aren't many landmarks visible in the postcard, but I can see a curved gateway above the "w" of the watermark. It looks very similar to the gateway at the entrance of the Ming Yuen Gardens which were in this area: 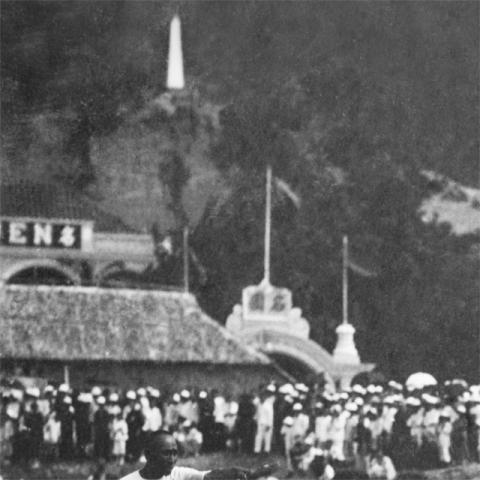 These three postcards were part of last month's purchases. Unlike the set we looked at last week, these were all bought individually, so it's just luck that they share a link to the tourist's trip around the island. The other three were also bought one by one, starting with this view of "Part of Queen's Road". 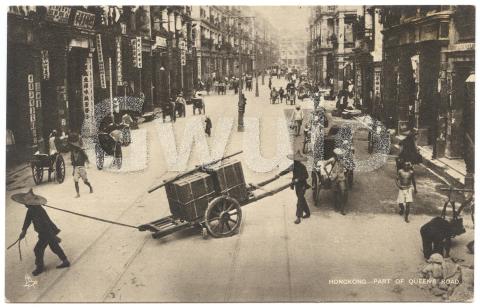 You've probably noted the tram lines, and of course the tram didn't run along Queen's Road so this shows Des Voeux Road instead. The postcard was published in the UK by Tuck, so given the distance it's not surprising a mistake crept in to the title. 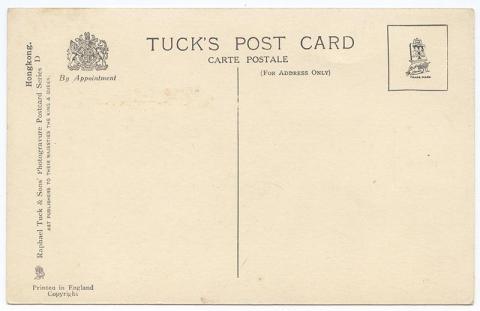 Tuck was a giant in the postcard world, so it would be wonderful to look into their archives and see the original photos used for their Hong Kong postcards. Unfortunately, as this history of Raphael Tuck & Sons Ltd explains:

[...] on the night of December 29th, 1940, the Nazis poured tons of bombs on London. By morning, Raphael House was shell and rubbish. Records of seventy-four years and 40,000 or more original pictures and photographs by the best artists were in ashes.

The last two postcards I bought both show views of the harbour.

The first one looks out over Wanchai and the Royal Naval Hospital. The card is a bit beaten up around the corners, where it looks like it has been pinned up then pulled down. Fortunately none of the main view is damaged, so a visit to Photoshop will help tidy that up. 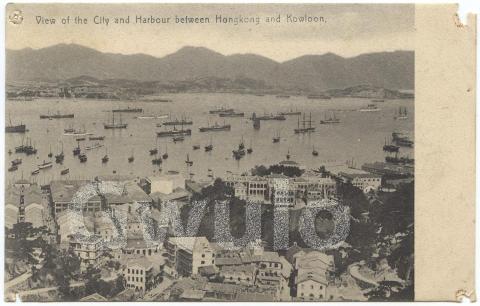 The last one also looks over Wanchai, but from further west along the hillside: 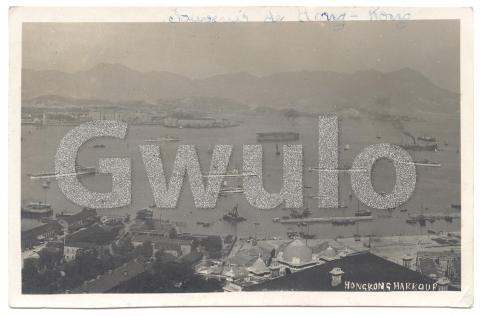 I bought it to take a closer look at the big ship above the "u" of the watermark, which I believe is the early aircraft carrier, HMS Argus. 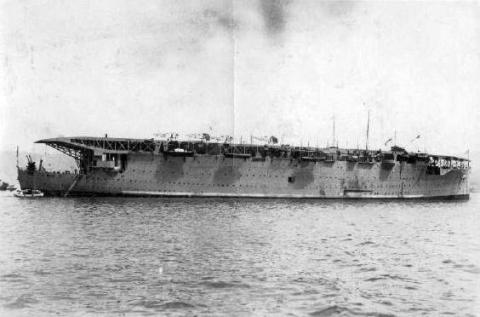 It's always a bit of a gamble when buying these old postcards, as unless the seller posts detailed scans I don't know what their quality will be. The postcards printed as photos are usually sharper, but not always. Luckily in the case of the Harbour view above, the photo is very sharp. Apart from the view of Argus, there are also good views of the Praya East reclamation, and the aerial ropeway, so we'll come back and look at that postcard in more detail another day.

Gwulo's photos and reference books are rapidly disappearing, as we pack up to move to a different flat next weekend. Gwulo's newsletter will take a one week break, then return the following week once the boxes are unpacked!

French on the postcard

From your son who loves you and thinks about you for life and from the bottom of his heart.

You then follow this (but without a photo credit)  with a very decent picture of HMS Argos posted independently by Moddsey earlier in April this year. Your wording suggests that your "closer look at"  your postcard by "blowing it up" has provided the detail we see in the following picture but this is not the case. I think this should be clarified so that readers are not under the impression that this postcard provides the clear detail we see of HMS Argos.

Your son, who loves you and thinks about you for life [,] from the bottom of my heart [signature]

Beyond the entrance, the steel structure of the cafe at Ming Yuen Gardens can be seen below.

re: French on the postcard

Thanks to everyone who replied on the website and by email with the translation.

Thanks Moddsey, that's a good confirmation of the location.

The Chinese character 園名 below the flag obvisously proved it's Ming Yuen Gardens. 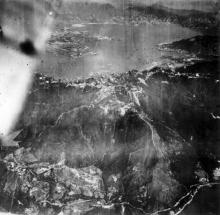