1950s View of Central from the harbour 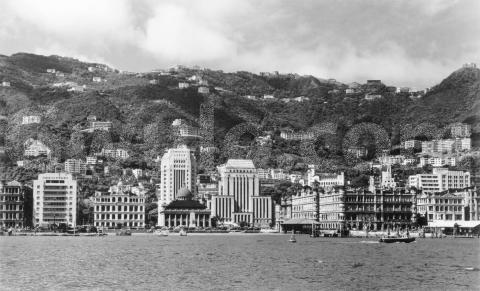 Where: No problem identifying this one, we're looking at Central from the harbour, with the HSBC building in the centre.

When: Down in the foreground there's reclamation underway, with piles poking out from the sea at either side of the photo. 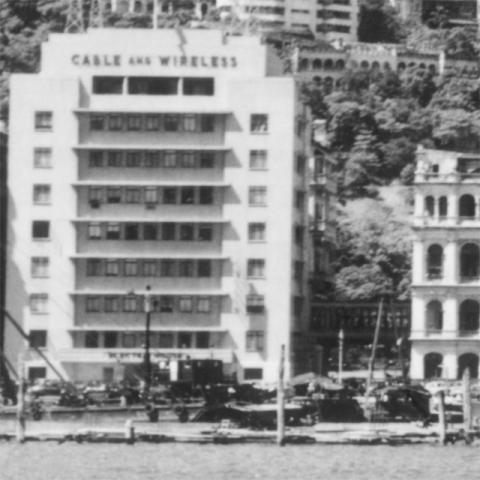 The 1955 Hong Kong Annual Report describes it like this:

The reclamation, begun in 1951, of nine acres of land in a central position on the Victoria waterfront was completed in August. This reclamation will provide a site for a City Hall, as well as a concourse area for a large new passenger ferry pier ((ie the new Star Ferry pier)).

This looks like early days in the reclamation project, so I'll guess this photo was taken in 1951.

Who: Queen's Building was home to a wide range of companies, many connected with the harbour: 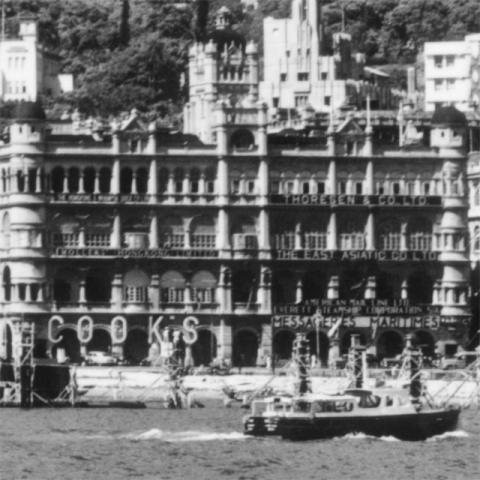 The biggest name is COOKS, the travel company. (Their harbour connection was that in the 1950s, most visitors to Hong Kong would arrive by sea). Cooks are still in business today, now using their more formal name, Thomas Cook.

Above Cooks is a sign for the Mollers shipping line, then over on the right are the Messageries Maritimes, another shipping line. As the name suggests, they were a French company. Several of their routes called in to Hong Kong: 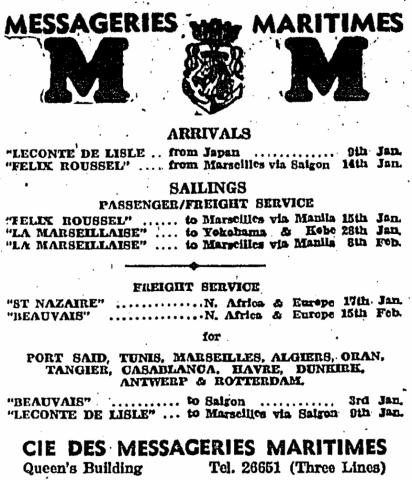 Other company names shown are:

I've only found Cooks and Thoresen still operating under their original name. The other companies have either gone out of business, or merged and changed their name.

What: As this is a very clear photo, let's look beyond the buildings on the seafront, and take a walk from Central up to Barker Road on the Peak. Here's a rough outline of the route: 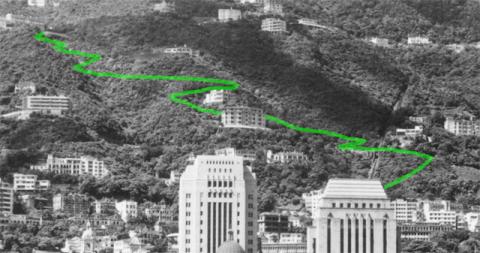 A few years ago the government started promoting it as "The Central Green Trail". I can't find any mention of it on the government's websites any more, but all the paths are still there. It starts off from the lower Peak Tram Terminus, and follows Tramway Path up til you reach Magazine Gap Road. (We can't see that section in the photo, as it is hidden behind HSBC.)

Cross Magazine Gap Road and head up Brewin Path til you meet Clovelly Path, then continue up to May Road. The Brewin / Clovelly Path section is the first one shown on the photo, zig-zagging right then left. The triangle of land between the tram line and these two paths is empty in the photo, but it's all built on now. There's a low-rise building on the corner and when I've walked past I've wondered how old it is: obviously not older than 1951!

Above May Road on the right of the tram track there's a group of buildings we've seen before:

At May Road we turn left, cross the bridge over the tram track, then join Chatham Path to head uphill again. The path runs behind a group of garages and an apartment called Gladdon, dating back to c.1929, You can just see them on the left of the bridge in the old photo:

Here's how they look today: 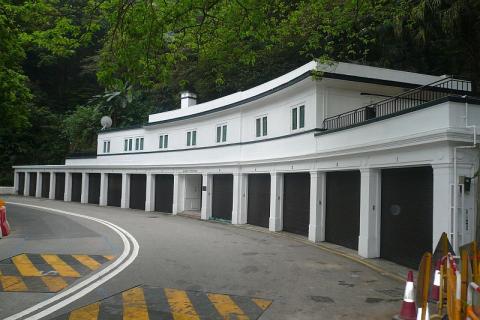 Next the path cuts between two buildings: 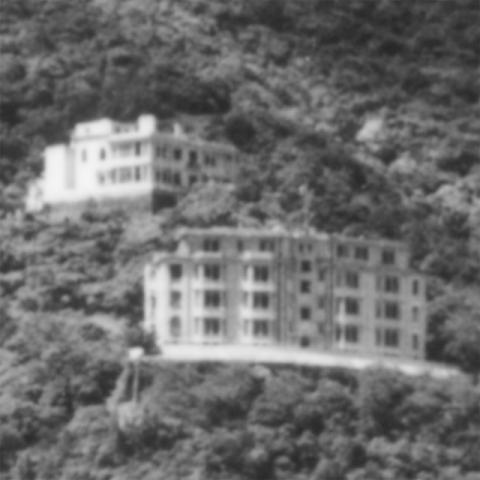 The larger, downhill building is Thorpe Manor, today the site of The Mayfair. Above that is #1, Chatham Path. It was built as a private residence, housed the Chatham English School in the 1950s-70s, and is now a private residence again. It's a lovely old house (built in 1927), but there isn't any road access so you'd better enjoy walking up & down hill if you plan to live there!

Keep on climbing til you're level with this building:

The old building, Inverdruie, is long gone, in fact the site has just been re-developed a second time, but keep an eye out on your right. A side path to the building is still there, together with a sign for "No 457". That was its old address, "457, The Peak": 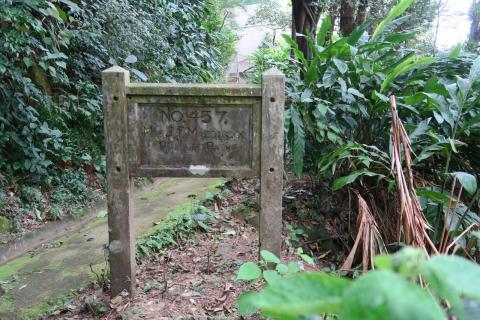 We're nearly at the top now. A few more twists and turns and you'll reach this imposing stone wall: 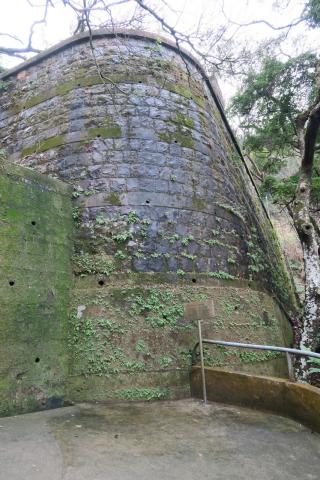 All that work to build a tennis court! In the old photo it's the light-coloured strip on the right of the path. 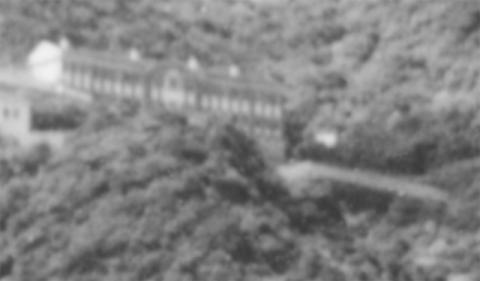 The building shown above the court is also still standing. Originally it was the Maternity Block of the Victoria Hospital, but now it has been converted to become the government quarters named Victoria Flats. 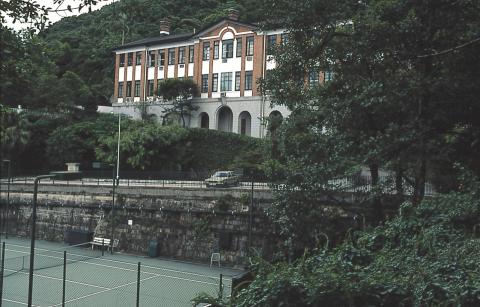 I recommend this walk as an interesting climb up the Peak, BUT to avoid any accidents it's best to wait for the dry winter weather. In the damp summer weather it really is a green trail, as sections of the path get covered with a slippery, green growth.

As always, if you can add any memories of the places and companies mentioned here, or correct any mistakes I've made, please let us know in the comments below.

I believe it is still being marked in Google Maps.

One takes golf carts to reach

One takes golf carts to reach #1 Chatham Path from the garage on May Rd.

Not sure about the date of 1951, maybe late 1953, or 1954.
They've put up the sea wall to mark the western boundary of the Star Ferry concourse, usually we've dated that as 1953.
Look at Alexandra House, only the sides facing Des Voeux road and Chater road are complete, the side facing Ice House street is not. The King Edward hotel is shown in the Coronation picture of Alexandra Building, so it has to be after 1 June 1953. We have usually dated that as 1954.
By 1955, Tregunter mansions would be completed.
Alun

Thanks for the comments & photos: 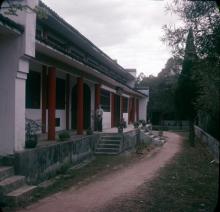 The Monastry at Shatin