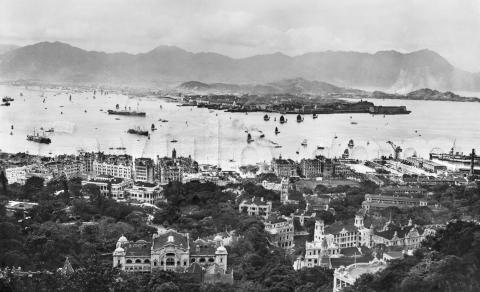 Who: There are a couple of people to mention this week. Here's a clue for the first one: 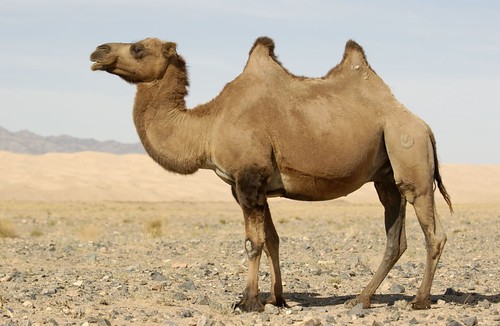 Mr Belilios was a successful businessman in Hong Kong, and for nine proud years the owner of Hong Kong's only camel. For a long time I'd wondered if this was just an urban legend, but Annelise found the report of the camel's demise in the 1897 newspapers: 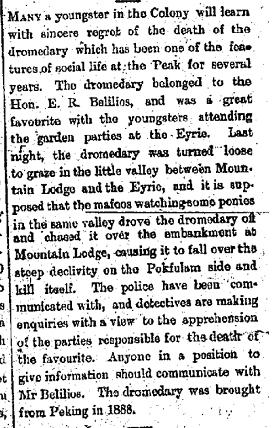 Belilios was generous with his wealth. He donated funds to the school that still bears his name, the Belilios Public School [1]. He also gave his money and his name to the Belilios Reformatory [2], though that building no longer exists.

His connection to this photo is the grand building in the foreground:

It was called Kingsclere, and was built as his home.

The other person to mention is the sender of this photo postcard: 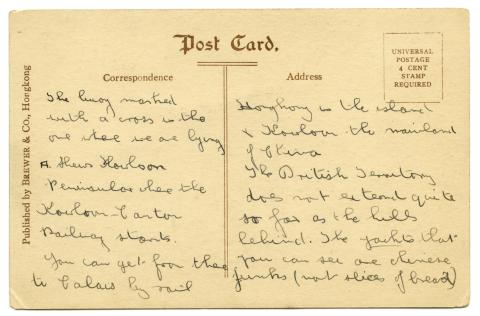 Their ship was moored in front of Blackhead Point, but he / she doesn't tell us whether they were visiting with the Navy or as a tourist.

When: Unfortunately the postcard was sent home in an envelope, so there isn't any postmark to help us. Let's try the buildings.

Kingsclere is a good place to start, as even by Hong Kong standards it wasn't around for very long. The building was finished around 1900, but Mr Belilios died in 1905 and it was sold soon afterwards. It was used as a private hotel for several years, but sold again in 1923 to be demolished and the site re-developed. By 1927, the first new building on the site was finished.

Since we can see Kingsclere, the photo dates to the first quarter of the twentieth century. A look down the tramlines will give us a better date: 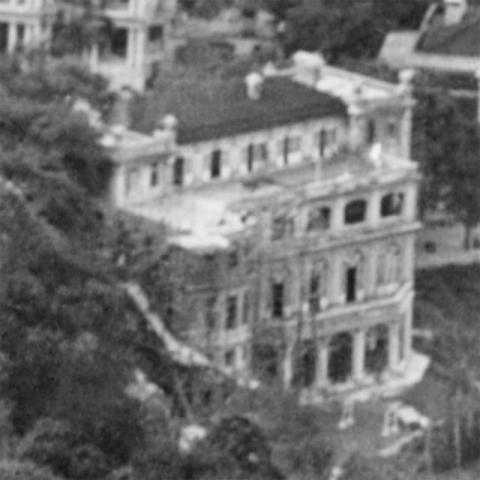 The Helena May was opened in 1916, so the photo must be newer than that. Here's how the building looked originally: 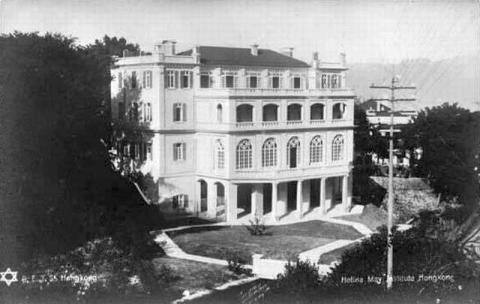 It started off as a symmetrical building, but that would soon change as the building was extended. Luckily for us, an extension project is underway in the later photo - look at the front-left corner of the building and you can see bamboo scaffolding and ramps leading up to the roof. They're filling in the corner with a new tower. That extension was completed on 21 June,1922 [3], so the later photo was likely taken in 1921.

What: Across the tramline from the Helena May was this group of three buildings: 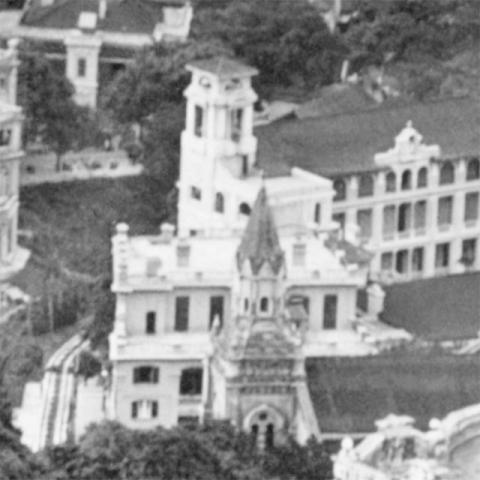 The spire in the foreground is the Union Church: 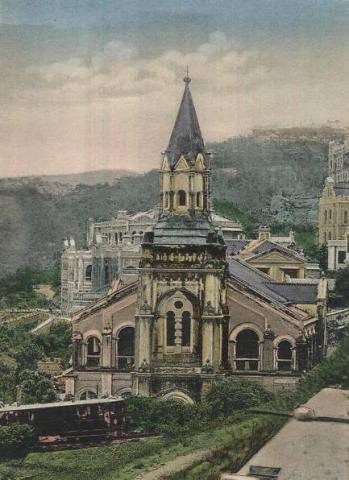 Across on the north side of Kennedy Road stood St. George's House: 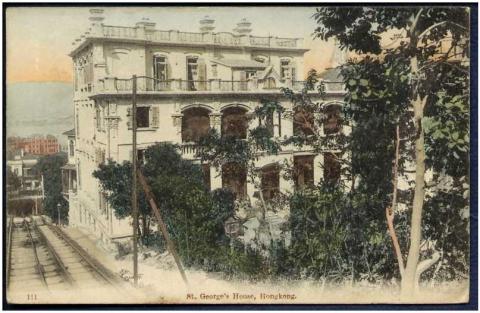 Then behind that is one of the towers of St. Joseph's College [4].

Down at the bottom of the hill there are tennis nets set up on the cricket pitch. 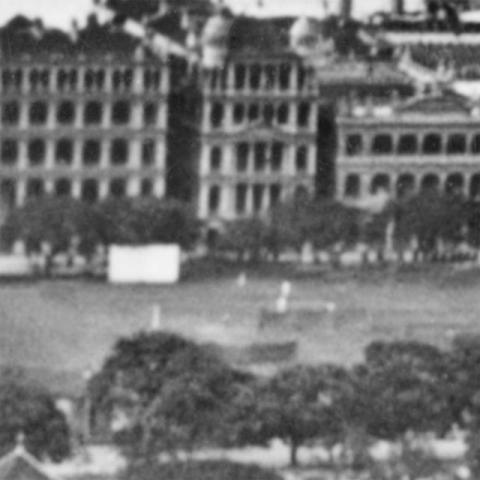 Was the change between tennis and cricket a seasonal event, or were the tennis nets put up whenever the pitch wasn't in use for cricket?

Eyes right and we see the big chimney in the Naval Dockyard, with a few ships and a submarine moored beyond it. 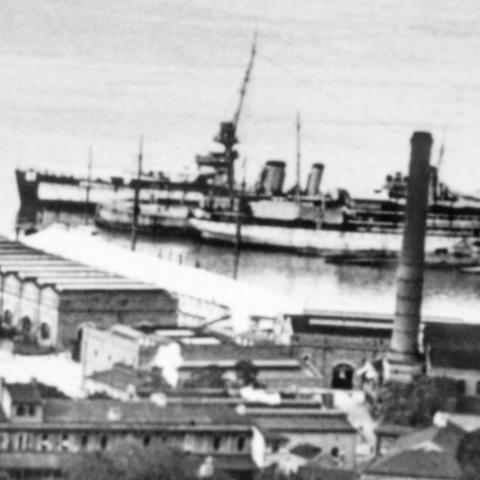 Finally, in the distance is the Hung Hom district. 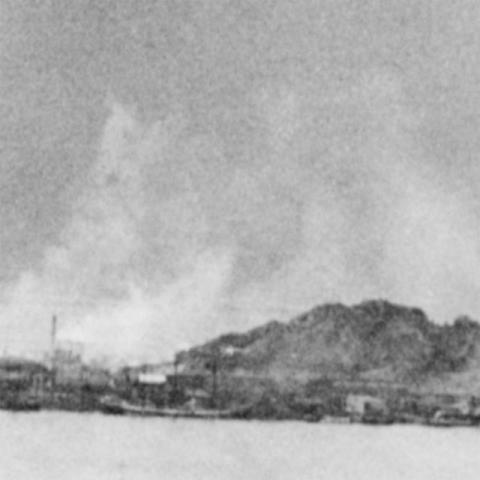 On the left is the Green Island Cement Works, the source of all that smoke, while on the right is a big hill. The hill has been dug away over the years, so that the only trace left today is the small patch of raised ground in Hutchison Park.

Where: This view down the Peak Tram line was a popular subject for postcards. Here's another one from about thirty years later: 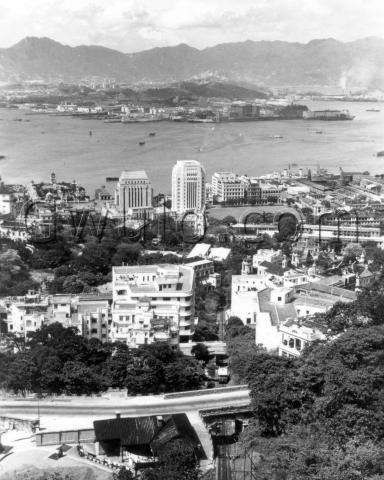 Can you spot anything else of interest? Please let us know in the comments below.

My recollection only goes back to early 70s,  just before the move to Wong Nei Chong Gap, but I think tennis courts were only laid out in the outfield during the off-season for cricket ie summer. That was certainly the case at the new ground.

re: Tennis at HKCC

Thanks for letting us know,

One hump or two?

Eagle-eyed reader Martin Heyes noticed I've got the wrong photo. It shows a Bactrian camel (two humps), but the 1897 newspaper report said Belilios had a Dromedary camel (one hump). 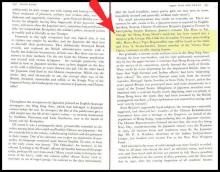