Where: Our first photo in the Year of the Snake is a panoramic view from the Peak. At the left edge of the photo we can just see the Central Fire Station (today's Hang Seng Bank HQ buiding), then we pan right across Central, Admiralty, and the newly-reclaimed land at Wanchai, ending up at Causeway Bay.

((Gwulo meetup in London: I'm meeting up with several Gwulo readers in London next Thursday 14th, for lunch and a chat. If you'd like to join us you're very welcome. Please contact me by email for the details.))

What: The Wanchai reclamation was shown in another photo I posted recently [1]. In that photo, taken around 1924, the reclamation had just started: 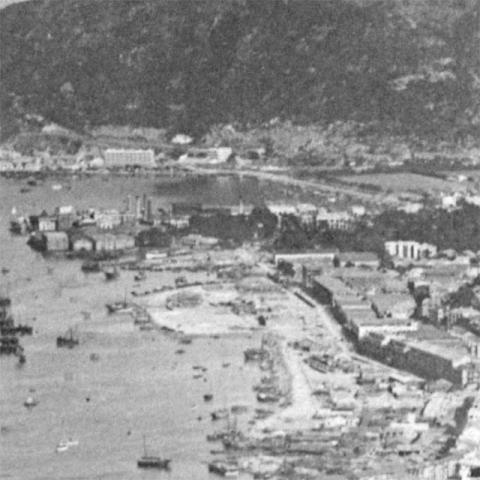 But by the time this photo was taken the reclamation was complete, and the new land extended right out to Gloucester Road: 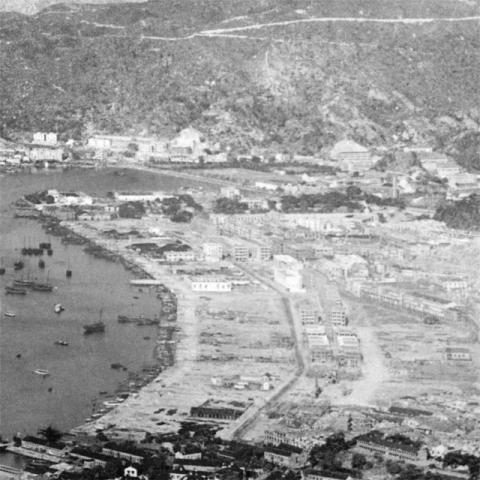 All that earth and rock had to come from somewhere - Morrison Hill. If you compare the two photos you'll see how most of the hill was dug away to provide the material for the reclamation.

When: The reclamation was finished, but building has hardly started, suggesting a date in the early 1930s.

Let's take a closer look at the buildings in Central to see if we can get any clues there. Here's City Hall, with Dent's fountain in front of it: 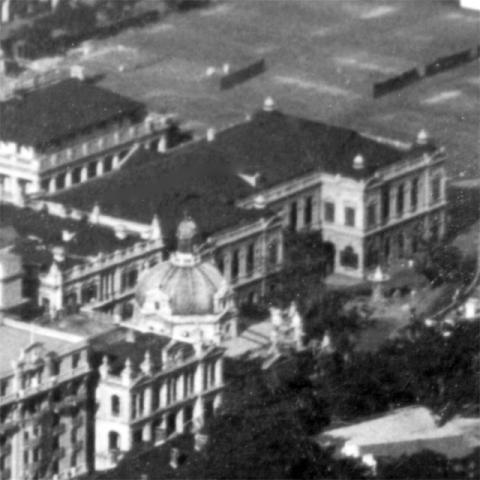 Moddsey recently noted that the west wing of City Hall was demolished in 1933, and that Dent's fountain probably went around the same time. Here they're both still standing, so the date can't be later than 1933.

A bit further to the left is this building wrapped in scaffolding, and missing its roof: 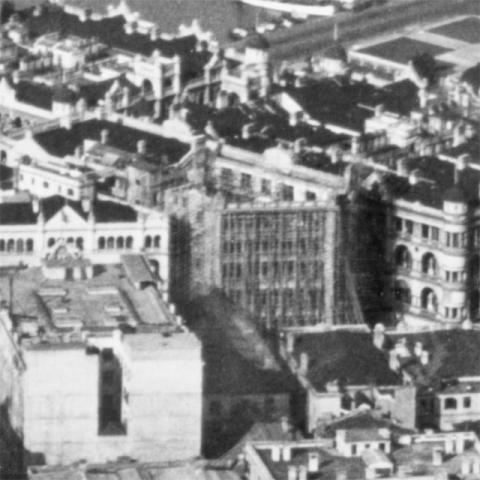 You might guess it's a new building under construction, but you'd be wrong. It was originally the King Edward Hotel, on the corner of Des Voeux Road and Ice House Street. The building was gutted by fire in March 1929, but rather than demolishing it they kept the shell and built a new (fireproof!) interior.

We know the renovation work had finished by April 1931, as the newspapers reported the Nederlansch Indische Handelsbank moved in on the ground floor.

So I'll guess this photo was taken around the middle of this period, ie 1930.

Who: Thanks to the photographer, whoever they were. For some reason they decided to take two photos, giving us this wide-angle view.

There is lots of detail in this photo, so let me know if you'd like me to blow up any part of it. And as always, comments, corrections and questions are very welcome, just leave a message in the comments below.

Trivia: I saw these two photographic postcards for sale on eBay a couple of years go, and bought them in the hope that I could join them together and make a single panorama. I've tried a couple of times in the past without success, but this time managed to join them up. You can still find the join if you know it's there, but it's good enough.

I guess that the reason it worked this time is because the software I use, a free package called 'Hugin', has been upgraded and is better able to deal with poor matches like this. If you ever need to join photos together, whether for panoramas, or to reassemble large documents you've photographed in sections, I recommend you give Hugin a try. Their website is at: http://hugin.sourceforge.net/

David - any chance the aerial ropeway over Queensway could be seen in the photo?

Good question. I took another look but it's too far away to be 100% sure. Here's that section of the photo: 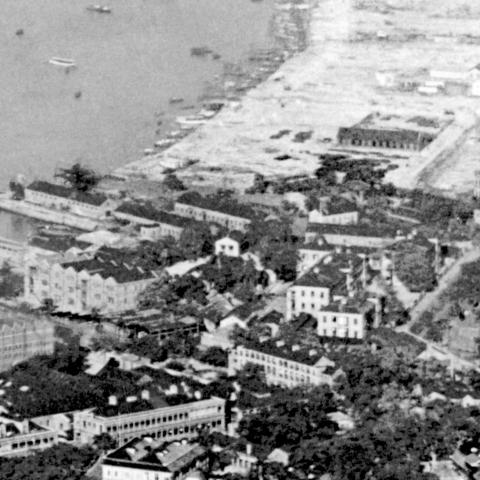 On the left of this section of the photo we can see the camber. Between it and the newly reclaimed land there is a structure on the shorline that looks like the gantry that was at the end of the ropeway. So though I can't see the ropeway clearly, there is a chance it is there.

... a curious-looking ship appeared in your picture of Victoria Harbour dated in 1930. It looks to me like the collier of the United States' Asiatic Squadron, USS Jason (https://www.ibiblio.org/hyperwar/OnlineLibrary/photos/sh-usn/usnsh-j/ac…).

It is an interesting ship to me because one of a very similar ship was being converted into aircraft carrier, USS Langley.

Here's a close-up of that

Here's a close-up of that section of the photo:

It matches the other photos of USS Jason in the web page that Chi Man linked to above. That page has a photo ref#: NH 52197 with comment:

With a Martin SC-2 aircraft (of Torpedo Squadron Four) on deck, during the middle or later 1920s.
Note the aviation star insignia on Jason's bow.

The star is also visible in this photo.

There has been plenty of speculation locally about the strange looking American man-of-war now anchored off Holts Wharf. She obviously does not have the lines of an ordinary warship, but the maze of masts in contrast to the wide sweep of top deck that characterize the Argus and Hermes seemed to preclude the idea of classing her as an aircraft carrier, although a few planes were visible on her upper deck.

A close examination from Kowloon side reveals a large number of aircraft neatly stowed away between the masts. Our representative who was allowed to visit this interesting craft was informed that the carrying capacity of the Jason was 50 aeroplanes, that number having been taken by her to Guam in 1926. She has the space on deck between the masts for 12 seaplanes.

The double mast structure, we are informed is not a success and the 4 middle masts are to be removed to make way for a straight flying deck extending the length of the ship. This would enable the planes to be brought up from the holds, assembled and lowered into the water much more conveniently and quickly.

The Jason has had quite an interesting history. Built as a humble fleet collier in 1913, she was promoted to her present state - officially described as an aircraft tender in 1925. The Jason made a previous visit to Hong Kong in 1928 and whilst at anchor off the Naval Yard she fouled the cables across the harbour with her anchors. She leaves tomorrow.

Talking about the bank in the G/F of King Edward Hotel, I think it should be the Nederlandsch-Indische Handels Bank, (source: wikipedia),
and the spelling on GWULO is "Nederlansch". (without a "D")

But I do not know any Dutch nor Germanic language and I have no idea when reading those foreign websites...:))))

so I am not quite sure which spelling is correct.

Independently, I found the same on Flickr, its title is: c. 1920 Wanchai pier

Interesting setting. There is sand, a short pier built in masonry, a wooden pier and several matshed huts. And a small (ferry?) boat with a canvas roof.

In the back, Blue Buildings can be spotted and the Naval Dockyard. Possibly an early version of the Wanchai Ferry Pier at the end of Tonnochy Road (which wasn't built yet). The location is possibly visible on the 1924 photo above. It could be at the rectangular reclaimed area.

In the 1925 Public Works Report under 183 ii the following is reported:

.... Two sets of boat-landing steps were built, and 1,241 lin. feet of coping set. Pending the completion of reinforced concrete pier No. 2, a temporary bamboo pier was built and maintained for the purpose of supplying water to the Waterboat Companies.

Any further comments are appreciated.

Fei Express into Kowloon from Canton - New Territories in background