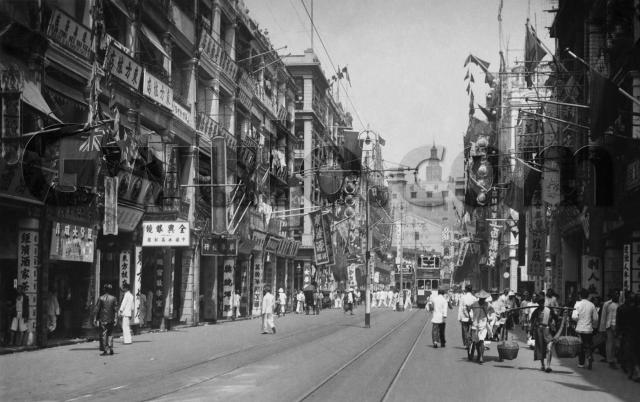 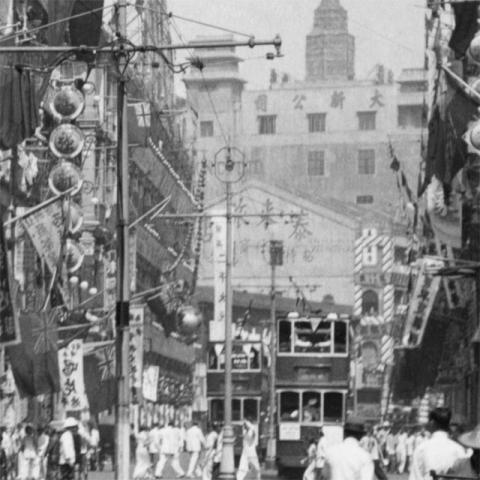 To the left of the trams is an older version of the Wing On Department Store. They still have a store on the same site today.

Who: The short shadows suggest it's near midday, and the streets are busy with the lunchtime crowd. Down in the foreground a dapper gentlemen is heading further afield in a rickshaw, passing a labourer carrying a couple of heavy baskets: 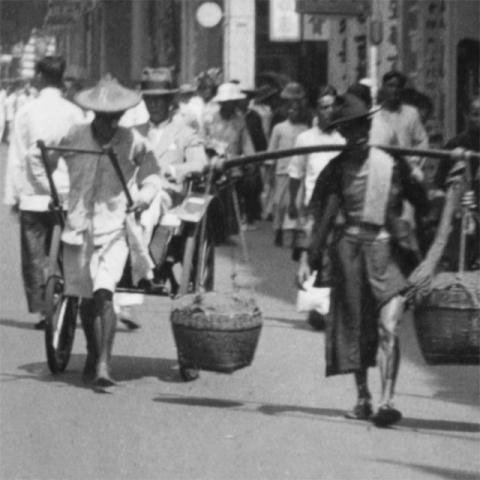 What: The buildings are decorated with flags:

And in the distance is what looks like the tower of a temporary 'pai-lau', the ceremonial arches built for special occasions: 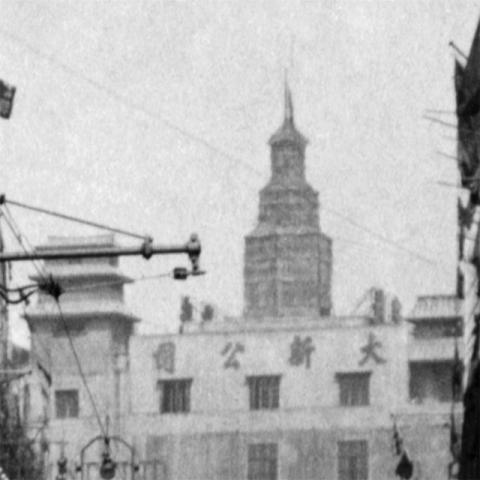 When: This postcard comes from an album that belonged to a British serviceman in WW2. The pages are dated from 1943-45, and follow his travels.

The Hong Kong pages are dated 1945, so he'd have arrived shortly after liberation. But I think that most, if not all of the postcards he bought show pre-war views taken in the 1930s.

Given the flags and tower, this could have been taken near to the date of one of the major royal events of the 1930s, either King George V's silver jubilee in May 1935, or the coronation of King Edward VIII in January 1936.

The people are dressed more for May weather than January, so I'll date this to 1935. Corrections welcome!

It would be good to know more about the postcards on sale in late 1945.

After the Japanese surrender, people in Hong Kong were very short of cash. The allied servicemen visiting Hong Kong had money to spend, and local salesmen would be keen to sell to them. I can imagine postcards would have been on sale almost as soon as the first allied ships sailed into harbour in 1945.

But where did they come from? Were there stocks of postcards that had been hidden away during the occupation? It seems more likely that local photographers had kept their negatives safe, and used them to print new postcards for sale. This style of postcard is printed using a photographic process, so if the paper and chemicals were available it would have been possible to get started printing on a small scale very quickly, and without needing a lot of capital.

If anyone has family that were in the photo-studio business around this time, I'd be very interested to hear if they were involved in selling postcards, and how they re-started their business.

What a lot of activity on that day! And to be able to see that distance in this photo is amazing. The Chinese characters denote The Sun Co Ltd, behind which woud be the Sincere Co Ltd. I wonder if the "pai lau" was located outside that popular department store.

There are some landmarks in

There are some landmarks in this photo. One is another " four biggest department stores" named "Da Sun" other than "Wing On". "Da Sun" is right at the middle in picture, we can see the name in the last picture. The lower one next to "Da Sun" is "Tai Loi Inn" where the later "Li Po Chun Chambers" located. Regarding the tower like architecture in the last picture, I am sure this was part of the roof of "Sincere" Department Store which just next of "Da Sun". There was a park on the roof of "Sincere".

Hope these can provide the suppliment for the details of this picture.

Thanks to you both for your comments. I've made pages for:

And we also have a page for:

I'm not sure yet whether the high tower in the last photo is a temporary decorative tower, or some protective cover around some constructive work. The first option seems more likely, and hopefully we'll get a photo that shows it from a different angle so we can be sure.

Thanks to Barbara Anslow, who writes:

Photo shops were very common in Hong Kong when we lived there.   I guess shop owners hid away their stock during the war.  My 2 sisters and I had our photograph taken as a present to our parents for their Silver Wedding in 1940.  This was done by a well known photograph company.   After the war, we wanted another copy and found the company had kept the negatives!

The Sun and Sincere Co

I used to help my uncle (who ran a shop making traditional wedding gifts) deliver goods in my childhood and frequented these department stores - Sincere, The Sun, Wing On (all in the same neighbourhood) and Chinese Emporium (on Queen's Road Central near the Central Market), as well as the China Emporium (corner of Hennessy Road and Percival Street in Wanchai/Causeway Bay).

The rooftop park of Sincere Co. (as I was told) was a teahouse with Chinese singers performing there. Listening to Cantonese songs was a favourite pasttime in the '30s and 40s, with big names like Tsui Lau Sin, Siu Ming Sing ... Sincere charged a bit more than the regular teahouse without singers.

Thanks TW, it's always good

Thanks TW, it's always good to hear people's memories of these disappeared buildings.

Is there any chance of being able to have a look at a higher resolution copy of this image. I would be interested to know whether 昭信公司 features in the photograph. It may not as I understand the store went out of business in the 1930s (post 1932) but I understand it was located in Des Voeux Road Central and like the 'Big Four' department stores nearby had links with Chinese Australians.

Please click on the 'Zoom' tab at the top of the page to access the higher resolution copy. 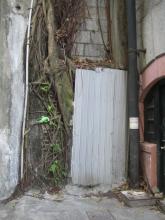