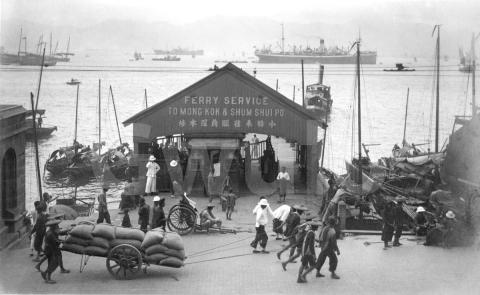 The eBay seller advertised it as a "Hong Kong Real Photo Postcard Yaumati Ferry Pier Mongkok 1920s", so they were a bit vague about the actual location. The first clue I noticed is those thick overhead cables, showing we're somewhere along the tram line on Hong Kong island.

The other obvious clue is the pier for ferries to Mong Kok and Sham Shui Po. Fortunately we've seen it before, so we know it was off Connaught Road, in front of Western Market [1].

The seller's title also highlights this is a "Real Photo Postcard", or RPPC. Unlike the mass-produced postcards that were printed in bulk on a printing press, an RPPC was printed in small numbers from a negative, just like printing a regular photograph. The companies who manufactured photographic paper were well aware of the demand for RPPCs, and produced custom paper for this market with pre-printed postcard markings on the back. You can see them on the back of this card. (You can also see the uneven shape where the local photographer cut this card out from the larger sheet of paper.) 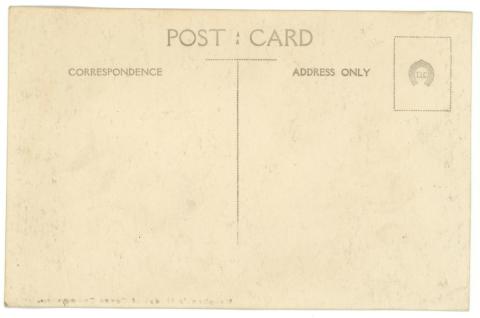 At top-right is the stamp box, where you'd stick your stamp. This postcard is unused, so we don't get any stamps or postmarks to help us with the date, but we can see the manufacturer's logo, a horseshoe with the initials T.I.C.

Geoff Caulton, a.k.a. The Photo Detective identifies the manufacturer 'T.I.C.' as Thomas Illingworth & Co. [2]. By gathering all the RPPCs in his collection that have this logo and a date, he's also identified this type of paper was in use during 1919-1932. He's gone an extra step and also noticed that the symbols printed between POST and CARD changed over the years, dating the upward arrows seen on our card to c.1928. I can imagine the photographer wouldn't have used all a batch of paper up at once, but it probably wouldn't last too long in the Hong Kong climate, so I'll estimate this card wasn't printed any later than 1929.

The front of the card has another clue about the date.

I can see a sturdy, granite building on the left edge of the main photo, but on this next view of the pier there's no sign of it.

Here's another view of the area, with our pier in the left foreground. The shelter on the pier looks slightly different and a bit run down, so I think it is the oldest photo of the three.

If you look at the right side of the photo you can see a similar building to the one we saw in the main photo, but here it is on the inland side of the road, and over on the east side of the Morrison Street junction.

The buildings are public toilets. They usually stay in one place, but in this case a new neighbour paid to have it moved:

The removal of the Urinal at Connaught Road, Central, opposite the Western Market, was the result of negotiations with the proprietors of the New Queen’s Hotel, the cost involved thereby in the sum of $1,950.00 being borne by them. [3]

Looking at the oldest photo again, a new hotel was being built on the corner of Morrison Street, just to the right of the urinal. The urinal would have blocked their view of the harbour, and no doubt smelled horrible, so in 1924 they paid to have it relocated.

Our main photo can't have been taken before the urinal was moved in 1924, giving us 1924-1929 as my current best estimate for the photo's date. If you can spot any other clues, please let us know in the comments below.

There's a ferry approaching the pier. 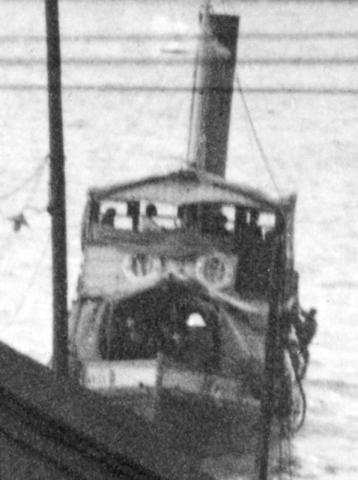 It's smaller than I expected. Though if you look at the map of Kowloon in 1920 [4], Mong Kong and Sham Shui Po were still being built out, and their populations were a fraction of today's.

The photographer wasn't interested in urinals or piers, as the postcard was sold with the title "Hongkong's Modes of Goods Conveyances" stamped across the front. Visitors to Hong Kong were often surprised by the amount of human labour used in Hong Kong, so this scene of the men pulling the heavy cart was sold with that in mind.

The other workers in the scene include a rickshaw puller waiting for a passenger, and what looks to be a hawker with something to sell to the ferry passengers. 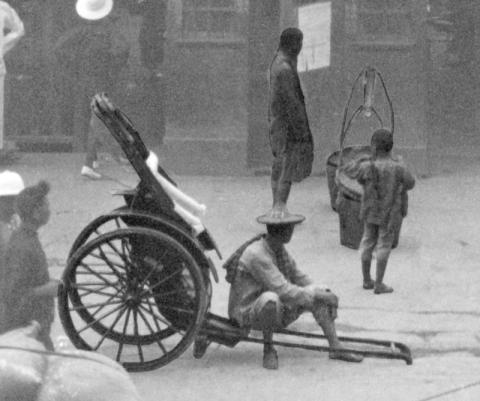 If the photo looks familiar, it's because we saw it a couple of weeks ago when we were looking at the Kowloon City Pier. I made a half-and-half comparison, to show the similarities between the wooden shelters on the two piers: 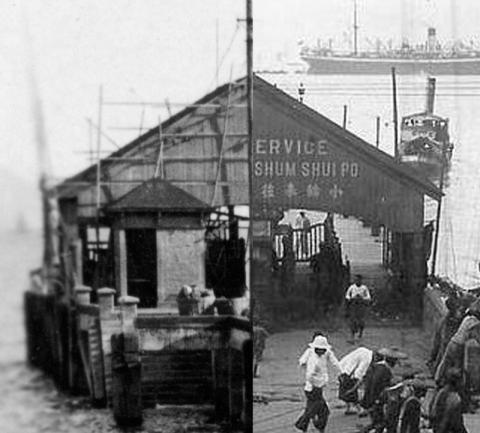 When these cards were first sold, I wonder how the price of an RPPC compared with a mass-produced card?

The New Queen's Hotel  on the Praya on the eastern side of Morrison Street was the Empress Hotel. Completed in 1925 and opened for business in 1927. See here

There is another photo showing the pier and the urinal nearby. It is 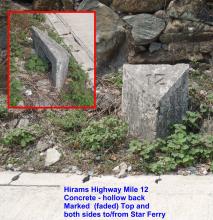