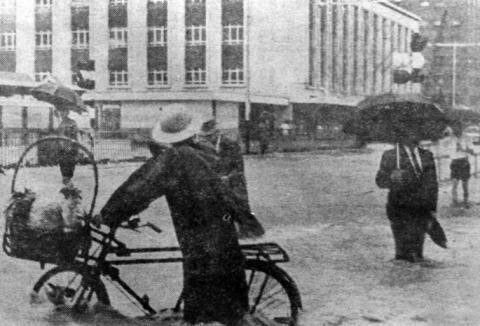 Between 11 and 13 June 1966, heavy rainstorms resulted in 64 deaths, 48 persons missing, and 29 injured. The number of affected people amounted to 6,183 and the affected areas included Tsuen Wan, Tai Po, Castle Peak, Yuen Long, the outlying islands, Shau Kei Wan, Aberdeen, Causeway Bay, Kennedy Town and Ngau Tau Kok in Kowloon. The situation was more serious on Hong Kong Island. In the Aberdeen area alone, 1,200 people were affected. 58 In the New Territories, particularly in Tai Po and Yuen Long, farmland was seriously damaged. According to newspapers, 95% of the paddy fields and 50% of the vegetable fields in Tai Po were flooded and destroyed. In Yuen Long, 35% of the rice fields were flooded. As agricultural products suffered severe losses, food prices rose accordingly.

Film on Youtube by British Pathé: Floods And Landslides, Many Dead (1966)

Photos of this event: 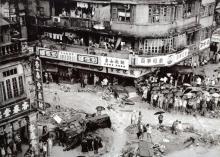 David, what about adding

David, what about adding rainstorms to the typhoon timeline? And then renaming to Natural Disasters in Hong Kong?

re: David, what about adding

I'd like to keep a timeline of typhoons, as they're such major events in Hong Kong's history.

We could have a master page for Natural Disasters in Hong Kong which links to the various-categories.

Then we could have another timeline for Other natural disasters, where we put this rainstorm and any other non-typhoon disasters. If any new category such as rainstorms gathers say 5 or more events, they can then be moved out to their own timeline.

Will that work for what you want to do?

I was a student at KGV when the rainstorm hit. I recall I was at my Dad's farm on Lantau when it started. The schools were closed for a week, which I thought was great, but then the Education Department deducted a week from the summer vacation to make up for it, which wasn't so great.

I fully understand that you want to keep the category typhoons "clean". My thoughts were just to have categories that also give a timeline for other severe natural impacts. As far as I see it, we only have two rainstorms listed (1926 and 1966); more candidates for "Other Natural Disasters" could be landslides. e.g. Po Shan landslide (although severe, but only local and possibly not to be added like fires - Shek Kip Mei).

Anyway, it's not urgent and can be discussed further when you have finished the upgrade work.

Thanks Klaus, we'll discuss again after the upgrade.