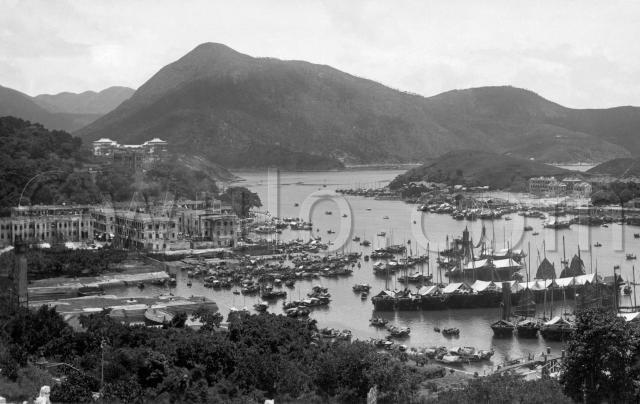 Where: We're looking over Aberdeen Harbour, on the south side of Hong Kong island. In the twentieth century, tourists would visit Aberdeen as part of a round-the-island sightseeing tour, making this a popular view for postcards.

The photographer had found a raised location to set up his camera. I'm guessing it was the cemetery above Aberdeen, as down in the bottom-left corner you'll see a white stone lion. They're often used as decoration on Chinese graves.

Who: Fishermen and their families, as most of the people in Aberdeen still lived on the water. There hasn't been much development on land yet - just a couple of streets in Aberdeen, and a few more buildings across the harbour on Ap Lei Chau.

What: Between the stone lion and the streets of Aberdeen we can see the Hope and Lamont dry-docks. On this day the dock gates are closed, but the docks are filled with water. Look over on their left and you'll see the chimney of the pump house.

Aberdeen only has a few streets in this photo. You can still see this same street layout today: the corner on the right foreground (to the left of the base of the "l" in the watermark - there's a truck there) is the junction of Wu Nam Street and Cheng Tu Road.

Looking beyond the truck, we can see a couple of buses parked, then a curve where the road runs along the seafront and around the corner. If you've seen the 1950s film Love is a many splendored thing, you'll recognise that curve. The two main characters, Mark and Su-Yin, drive around here before catching the small boat over to the floating restaurant in the harbour.

Above Aberdeen Town is a dark, two-storey building, then the Aberdeen Police Station. Beyond that you can see the curved roof of the Holy Spirit Seminary. Both buildings are still standing today. The main peak in the photo is that of Brick Hill, today the site of Ocean Park.

Moving round to the right, and we see Ap Lei Chau island. There's an area of reclaimed land along the shore. Probably only recently reclaimed, given that it hasn't all been built on yet.

In the harbour there's a mix of smaller sampans, and larger junks. You can see several of the larger junks have their fishing nets hanging up to dry.

Finally in the lower right corner is a pier, leading to what looks like a tended garden area. Was this all part of the dockyard's land?

When: A copy of this photo appears in the book "A century of Hong Kong Island Roads and Streets", dated c.1925. However we know that the Holy Spirit Seminary was completed in 1931, so c.1935 seems more likely. Can anyone date the reclamation work on Ap Lei Chau? That may help narrow down the date.

Re: old buildings on Apleichau

I'm afraid only the Hung Sing Temple is still there.  You should be able to see a fraction of it together with one of its two flag poles in the extreme right of the photo.

I notice that the further dock may be in the process of being pumped out (or filled) since the water levels are noticeably different either side of the caisson gate.

James Hayes in http://sunzi.lib.hku.hk/hkjo/view/44/4401112.pdf notes that the Apleichau reclamation that joined what used to be called Careening Island (its main use in early days) to the main island predates 1937, but is not more specific than that. If you look at http://hub.hku.hk/bitstream/10722/27048/1/FullText.pdf you will see an excellent aerial photo of Aberdeen Harbour in 1924 which shows that the reclamation was already largely complete, suggesting it wouldn't have been underway long.

The really interesting little detail can be seen in what was known as Deep Pass (the seminary was built above Deep Pass Point - the site of one of early HK's hydrographic survey datums). This is a pair of what may be fairway buoys or beacons of some sort either marking hazards or, to me more likely, the safe deep water channel.

It's fascinating, looking at this photo, to remember that in the 1880s HMS Audacious, 6,000 tons, flagship of the China Fleet, was able to enter the larger of the two docks (Hope), probably to have a look at the damage she suffered (and which caused her to be withdrawn and replaced by HMS Iron Duke) in a storm off Japan.

Two other points of interest. One is that the tide gauge hut on the S end of the southern dock, which appeared in another Gwulo photo painted white, seems in this photo to be unpainted. The other is that beyond the tide gauge hut along the foreshore there is an extensive log pond. One wonders whether this was for the dockyard or for the local boatbuilders.

Thanks Stephen, that's a bunch of interesting details I didn't know about.

Here's an 1845 map showing the original Careening Island off Ap Lei Chau (or 'Aberdeen Island' as this map calls it): 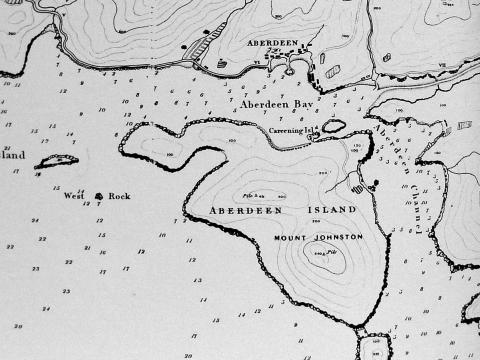 Careening a sailing vessel means to beach it at high tide in order, usually, to expose one side or another of the ship's hull for maintenance below the water line when the tide goes out.

In his main article above, David asks when the Ap Lei Chau reclamation was carried out. According to the PWD Reports of 1920-22, the contract was awarded in 1920 with work due to start in December that year, the sea walls were done by the end of 1921 , and the job was finished on 31st January 1922.

David's post of the 1845 map above shows two islands in Aberdeen Bay (aka Harbour), the smaller one being the "careening" island. Surprisingly, both islands are still there, albeit now landlocked!

Here's a view of them when they were still islands in the early 1900's.

And here's the eastern one after the reclamation with buildings on top, dated to the 1930's.

Today both the former islands are to be found in the public areas behind the Ap Lei Chau harbourside promenade. Both are covered in trees, but unfortunately have been shot-creted. This is the eastern one.

The western one, the former careening island, is just behind the Hung Sing Temple.

Signboards in the vicinity inform us that Ap Lei Chau, meaning Duck's Tongue Island, was so named as the shape of the Island resembled the bird's tongue. The two small islands in the harbour, being near the Duck's tail, were said to represent its eggs, and so were known as the Duck Eggs. Later Ap Lei Chau was believed to be a lucky place for human births so the small islands became known as the "Fung Shui Eggs". 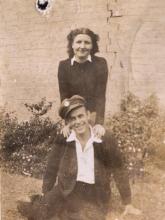