"The London Missionary house on the north side of Aberdeen Street.  Below it is the Union Church'

Union Chapel is situated a little below the level of Caine Road on a line drawn at right angles from the shore commencing near Messrs Russell & Co.'s wharf.

The treaty ports of China and Japan: A complete guide 1856-7

A Union Chapel, in connection with the London Missions, and intended for services in the English and Chinese languages, was built in the present Hollywood Road, in spring 1845.

Europe in China: the history of Hongkong from the beginning to the year 1882

Hong Kong—A new and commodious Chapel has been erected on an eligible site adjacent to the ground granted to the Mission by the Government, and opened for Divine Worship. Another has been opened in the village of Wengnaching, where the Gospel has been regularly preached thrice a-week, and a School formed, containing thirty boys. The meetings in the Bazaar Chapel are good, and the Chinese have become much more respectful in their deportment than formerly while listening to the Gospel issionary Register 1847 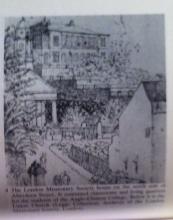 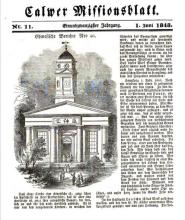 On the following Sabbath evening (Nov 1845) I was invited to preach in a chapel recently built, and known as the "Union Chapel," though it is principally under the control of the missionaries of the London Missionary Society. The congregation consisted of English residents, soldiers, Americans, and native Chinese, and numbered about one hundred persons.

Life on the plains of the Pacific

"On the third Sunday in June, a chapel of the American Baptists was opened, called the Bazaar chapel. On the I9th of July, the Queen's-road chapel, belonging to the same sect, was also opened. Three missionaries, belonging to the American Board of Missions, are erecting a large dwellinghouse and printing-office. Mr. Brown, of the Morrison Education Society, has commenced building on a hill which was granted by the Government, and will move his school and family over from Macao, in the course of two months. The Medical Missionary Society also have received a hill from Government, but have not yet commenced building. The Roman Catholics have a fine building which is neatly completed." - The Ecclesiastical gazette

The new bazaar chapel is just completed, and is every way a larger, better, and more convenient building than the old one. It is located just in the midst of the new bazaar, is forty three feet square, built of brick, two stories high, and was erected through the liberality of the foreign community. The auditory and vestry are on the upper floor; while the dispensary, book depository, and seven rooms for native preachers, are on the lower floor. It is designed to hold divine service there, entirely in Chinese, three times on the Sabbath, and every evening during the week. The Baptist missionary magazine, Volume 25‎

Through the generous contributions of the foreign residents, two neat and convenient chapels, one called the " Queen's Road Baptist chapel," and the other the " Bazaar Baptist chapel," were speedily erected, and dedicated to the worship of the One Living and True God. In these chapels religious services were held several times every Lord's-day, and almost every evening in the week. - Southern Baptist missionary journal

I'd like to add a marker for this. Please does anyone know its location? I've had a look through several old maps, but don't see it marked.

There it a chapel here, built

There it a chapel here, built for the London Missionary Society, for the twofold purpose of preaching the gospel to the English and to the Chinese. It is called ' Union Chapel,' denoting, I suppose, its admitting all evangelical christians into fellowship, [as yet, Do church has been formed] and admitting all evangelical ministers into the pulpit. There are tiro services in English, and one in Chinese. Mr. Brewin, of America, head master of the Morrison Education Society, and myself, preach alternately in the morning. The congregation is small, but select, consisting a good deal of military officers, merchants, &c. There is no other place of worship in the island where the gospel is preached in the English language, except the English Episcopalian place of worship, where it is preached faithfully by Mr. Stanton, the civil chaplain. There were other places where the gospel was preached both in the English and Chinese language, by the American missionaries; but they have all left, and gone to Canton; and these places of worship are closed. There ought to be one English minister here, if not two, expressly for the foreign population.

It is in contemplation, that a gentleman, who is not a missionary, shall be the minister of 'Union Chapel.'

There much needs a faithful ministry for the English residents. Hong Kong is a very wicked place; Englishmen generally [there are a few bright exceptions, both among the military and civilians] act in a manner very unworthy their names as Englishmen and christians. The Sabbath is desecrated; the only god that is worshipped is Mammon; the only object pursued is accumulation of wealth; every thing is done, almost, that can be done, to counteract the efforts of missionaries to convert the natives; and success is small.

On this account, considerably, I think Hong Kong an unsuitable station for missionary operations. But it ought not to be so: the greater the number of Englishmen, the greater ought to be the influence on the side of truth and religion; but how far is this from being the case! It is an awful thing, that a consistent christian is ashamed of his countrymen here, and that the missionary prefers any locality to that in which many of them are. But Hong Kong ought not to be abandoned; nor will it be. I

Just expanding on the notes above.

A Union Chapel, in connection with the London Mission, and intended for services in the English and Chinese languages was built in the present Hollywood Road, in spring 1845, by means of a public subscription raised on 9 September 1844 by Dr. Legge.

On the site of St. Andrew's School, closed in 1861, Dr. Legge erected his 'new' Union Church which was removed thither from Hollywood Road in July 1863.

In 1843 the first Union Church meetings for worship were held in the house of Dr. James Legge, of the London Missionary Society, one of the five Protestant missionaries who produced a new Chinese translation of the Bible, known as the Delegates Version. A Union Chapel in connexion with the London Mission was built in 1844. One record states that it was built in the present Hollywood Road, in spring 1845," The Church records make the date 1844, and the site Wellington Street,The Chapel was intended for services in the English and Chinese languages. An old newspaper file states that the opening took place in February 1845. An old Directory ( 1860 } definitely states, also that the Union Chapel was in Hollywood Road

Dr. Legge was formally inducted as the first Pastor in The. Church records state that the second Union Church was erected in Staunton Street in 1865, though another old references puts the date back to July 1863, the new church being erected, it states on the site of the former St. An- Drew's School { which had been opened in 1855 and was closed in 1861 ). This reference evidently gives an incorrect date as a directory for 1864 ( published in 1863 ) gives the Union Chapel as being still at Hollywood Road. The cornerstone of the present Union Church in Kennedy Road, was laid in 1390, and services commenced in the new building in 1891. The Church Hall was erected in 1897.

Would this be the Union Church marked here?

The Union Church had moved up

The Union Church had moved up to Staunton Street by 1877, there is a place for the second location here

The only church I can think of on Hollywood road was St Stephens in Tai Ping Shan but at the time the street was called Gap Street, it did not become Hollywood Road until 1887

I think the Carl Smith Card may have incorrectly recorded the location. The Rev James Lamont is listed here in the 1876 Blue Book as being at the Union Church on Staunton Street.

Hi Herostratus,
Thanks for the information. How can I find all notices in the gazette that deal with street naming and name changes? The search engine of the web site is not great. Thanks!

Unfortunately there isn't an

Unfortunately there isn't an easy way except searching the online records. The notification description also changed over the years, using rename/renumber will find most of them.

I have created pages for the renumbering over the years of Caine Road, Robinson Road, Conduit Road and the Peak. All the pages are listed here

If there is a specific street/road you are interested let me know and I will see what information I have.

Hi Herostratus,
Thank you for the tips. I had no idea the routes of Caine Road and Hollywood Road had changed.

I am interested in a few things:
(1) Notices on names and boundaries of districts, and subsequent changes. On old maps, districts had numbers, e.g. District 5 Choong Wan.
(2) First notice about naming of streets. Was Hollywod Road the first street?
(3) Shaukiwan Road -- How far west did it extend?
(4) When were streets given official Chinese names? From the very beginning?
Thanks again!

I cant help with most of this

I cant help with most of this but on the first roads in Hong Kong Queens Road was the first. On the 1842 Map a number of other roads are shown: Pottinger Street,although it seems to be at 90 degrees from Queens Road uphill rather than at an angle as it is today. There is a 40 foot wide road that runs a little way north in front of the magistracy, possibly the start of Hollywood road. Garden Road is also there as is a road that combines Battery path and part of upper Albert Road alongside today's CE house. The only other road that is clearly market is in the Lower Bazaar, today's Jervois Street

Hi Herostratus, thank you once again for your help. It is strange that the alignment of Pottinger St. is different.