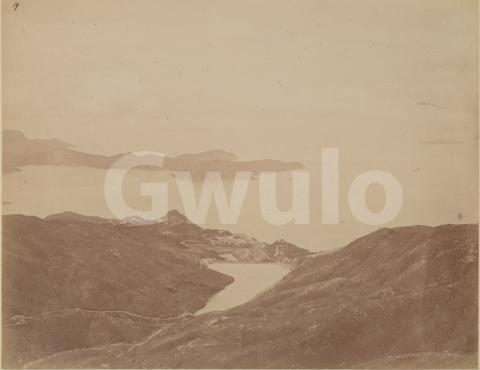 The original owner added this handwritten note below the photo:

Pokefulum-Reservoir and view towards the ocean, Hong Kong (on the opposite side of the island from the harbour)

Just like the 1950s photo we looked at recently, we're lucky that the photographer captured a building under construction. I'll give the details below, but it dates this photo to c. 1874. At almost 150 years old, that makes it the oldest photo in my collection.

The photo has faded with age, and at first glance there's not a lot to see. But this print is large and the photographer captured a sharp image, so after zooming in and adjusting the colours we've got plenty of detail to explore. 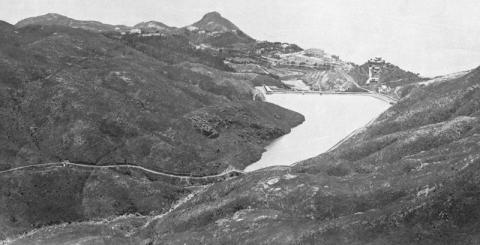 I noticed the road coming in from the left, Pok Fu Lam Reservoir Road, as it was one we'd often walk along when I lived on Hong Kong island. We'll use it again today as our path to explore the photo, following the road (marked in green below) downhill to the reservoir, then on until it meets Pok Fu Lam Road (marked in red), where we'll turn left and head towards Aberdeen. 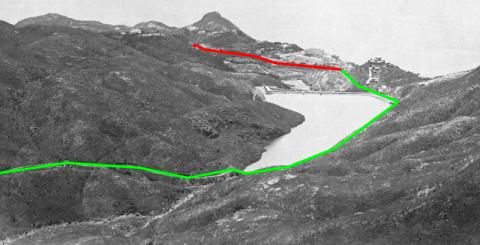 As the name suggests, Pok Fu Lam Reservoir Road was built because of the reservoir, but it has its roots in a much earlier road. 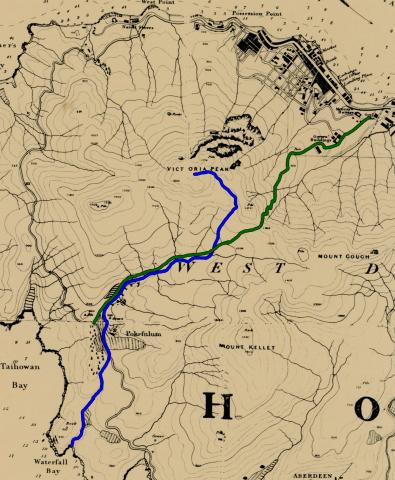 The inhabitants of Pok Fu Lam village (marked Pokefulum on the map), had two options if they wanted to get to the city on the island's north shore. They could take the flatter but longer road that skirts around the base of the Peak, or head straight up the hillside to Victoria Gap (roughly where the upper Peak Tram terminus is today), then down the other side. I've marked the short, steep route in dark green. I've also highlighted in blue the river that starts on the Peak, runs down past Pok Fu Lam Village, and eventually cascades into the sea at Waterfall Bay. 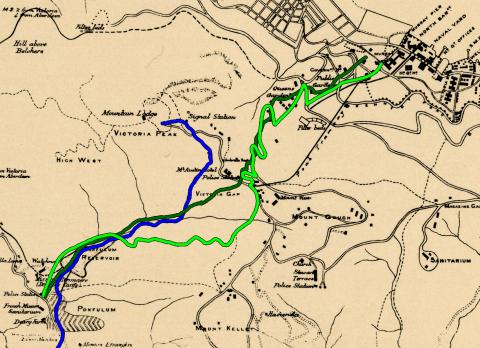 We can see that by 1895 the road, highlighted in light green, has been re-routed to the south side of the river, taking a longer route to give walkers a gentler climb. This new road was built in the early 1870s around the same time as the reservoir, and is the road we see in the photo.

Walking down from the Peak, just before we reach the reservoir the road makes a right turn to cross this bridge. 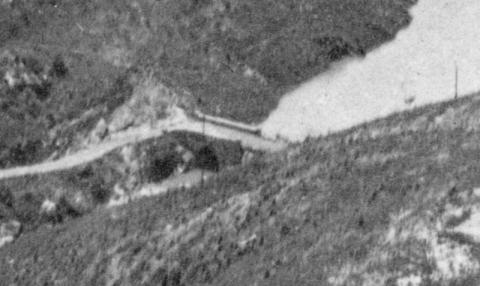 I hadn't given it much attention, but as the bridge dates from c. 1871 it is one of the Hong Kong's oldest surviving built structures and deserves a closer look in future.

After crossing the bridge we come to the Pok Fu Lam Reservoir. 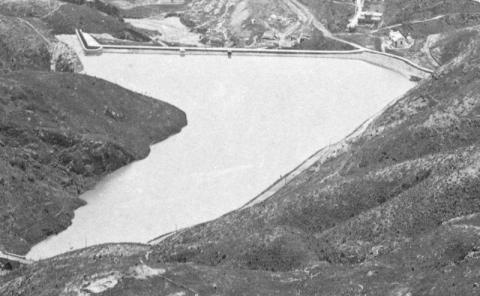 It is the second generation of reservoir in this valley, built to replace a much smaller reservoir that couldn't supply enough water for Hong Kong's growing population. The water from this reservoir flowed into the Pokfulam Conduit, which carried it around to the city. If, as in this photo, the reservoir was full, any excess water would run out over the spillway at top left then follow the old rivercourse down to Waterfall Bay.

As we reach the reservoir wall, we see a simple building up on the right of the path. 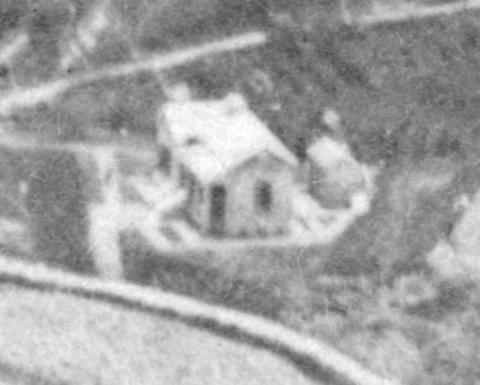 This was the watchman's cottage. Like the bridge we saw earlier, the building has survived and can still be seen today.

Overlooking the cottage is this much grander building. 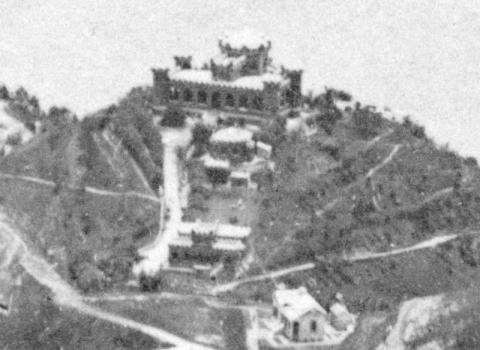 It was named Douglas Castle: Douglas after the original owner, the wealthy businessman Douglas Lapraik, and Castle for obvious reasons! Today this is the site of University Hall, and little of the original building remains.

Down on the left of the road are the roofs of a couple of small buildings. 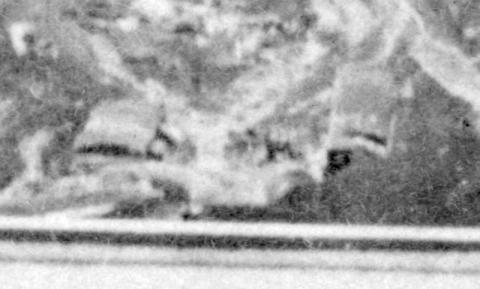 They're near to the beginning of the Pokfulam Conduit, so I guess they were related to the waterworks.

When we reach the junction with Pok Fu Lam Road, we see this building on the corner. 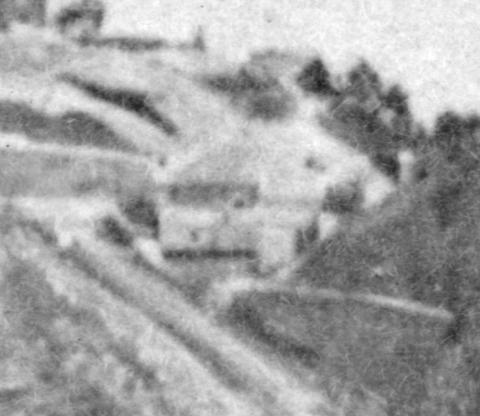 There's just an empty patch of ground there now, used as a car park, but for many years this was the site of the Pok Fu Lam Police Station. When I first read of this police station I thought it was in a very remote and quiet location, but after writing up the details of this photo it's clear there was a sizeable community in this area.

From the police station we turn left on to Pok Fu Lam Road. The first section of the road is overlooked by a construction site. 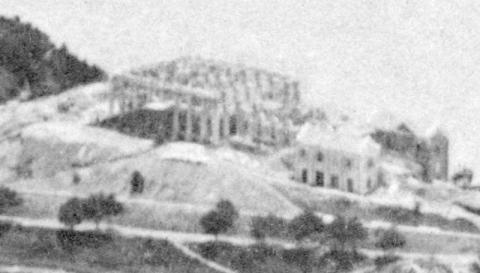 When it is finished, this will be Bethanie, a sanatorium where missionaries from the Société des Missions Etrangères de Paris (often shortened to Missions Etrangères, or just M.E.P.) could recover from illnesses caught during their missionary work in remote locations. Construction began in 1873 and the building was completed in 1875, giving us our estimated date of 1874 for when this photo was taken.

Looking down to the left, the land between the road and the river is clearly being farmed.

And on the far side of the river we can see roofs of village houses.

They belonged to the Pok Fu Lam village. The village is much older than anything we've seen so far, dating back to the 17th century.

Turning back to the right again, there is this bungalow is on the south side of Bethanie. 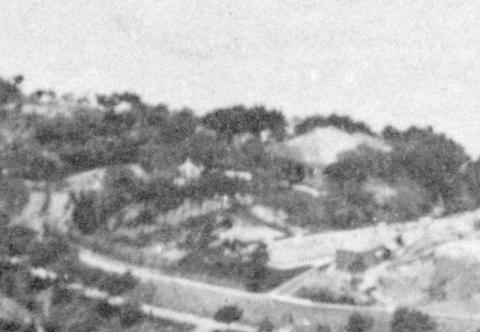 Lets take a closer look at the 1895 map to see if it gives us any clues about the building. 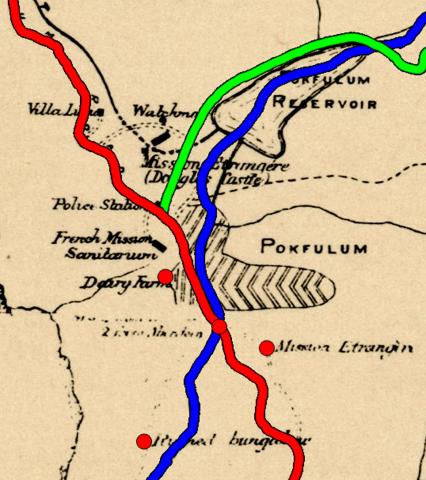 I've marked Pok Fu Lam Road in red, and also added red dots to mark the last few buildings we're interested in. On this map, Bethanie is shown as French Mission Sanitarium. Just below it, the dot for the mystery bungalow is labelled Dairy Farm. That was true when the map was drawn in 1895, but of course Dairy Farm only started business in the 1880s, so they weren't the owners when the photo was taken. The building's owner is till a mystery.

Continuing along Pok Fu Lam Road, the next dot marks the bridge where we cross the river. It's shown at bottom left in this crop. 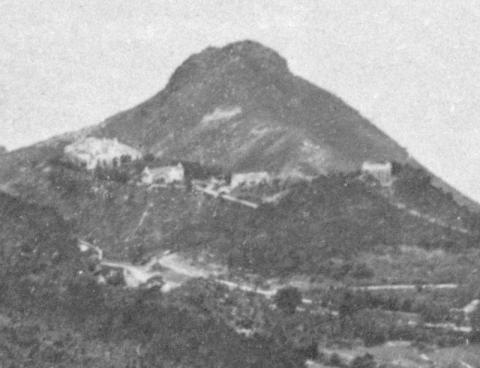 Looking up from the bridge, there's a large house with three smaller outbuildings, but again I'm not sure what they were. The 1895 map doesn't help, as it just calls it a Ruined Bungalow. We do have a page on Gwulo for a building in this area titled: Summer retreat of JJ dos Remedios [1860-????].  It is certainly a contender for the building shown above, but its description could also fit the site on the 1895 map labelled Dairy Farm, so I'd like to see some further evidence before confirming the identification.

The last building in the photo is up to the left, another grand building with what looks like a garden in front of it. 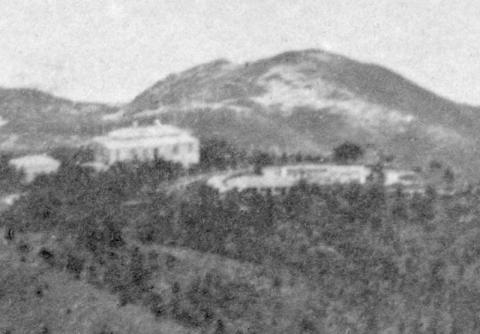 The dot on the 1895 map is labelled Mission Etranger, but they had only bought the building in 1885. Before that it was known as Clanmore, and was the residence of Butterfield & Swire's Taipan. I'm not yet sure if B&S were the original owners though, or if it belonged to someone else in 1874.

As this is an early photo, taken when the pool of possible photographers was still small, I wonder if it is possible to identify the photographer? This hand-written number is on the top left corner of the print, and could be a clue.

Further reading: I've linked all the places in the text to their pages on Gwulo, so you can click through to see what other photos and information we have about them.

This view south towards Lamma hasn't ever been as popular as the view north over the harbour, but it is still a well-photographed scene.

Finally, if you can add any extra information, especially about the identity of those last three buildings in 1874, please leave a comment below or on the relevant building's page.

Thanks to Jonathan Wattis of Wattis Fine Art for identifying the photographer:

For your reference this photograph is by Lai Afong. The original number and title was "526. Pok-Foo-Lum".

Thanks for the research!

Having spent 3 years at University Hall as an HKU student about a decade ago, this article is so intruiguing to me! The area around the reservoir was my neighbourhood. The landscape hasn't changed that much after almost 150 years when this photo was taken, which is quite a rare case on HK Island. Many buildings near the reservoir still remain despite being rebuilt or redeveloped at a certain point.

The river (and the bridge) you mentioned is largely unseen along the section of Pok Fu Lam Road near PFL Village and Chi Fu Fa Yuen. Is being hidden beneath the road or being diverted? A small waterfall can be seen near the bus stop of "Victoria Road Zone Sub-station" so I can imagine that the river flows down from somewhere beneath PFL Gardens across the PFL Road. 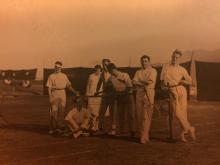