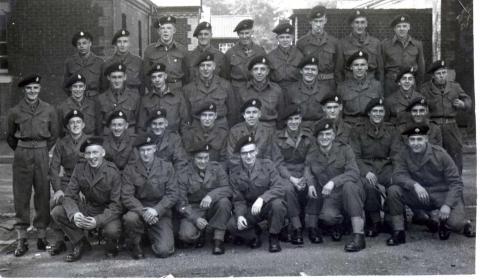 That’s me in the middle of the third row from the front,  sixth from the left, age 18!

“Friday”   -    Farnbobo’ aerodrome is within a stone’s throw of us and I saw the “flying triangle” avro 707 today.   We also heard quite a few bangs and I think some of them might have been jets going through the sound barrier.

12 October 1952   -    Now just a word about one of the crew here.   This fellow was a non-reporter that is, on the day he should have gone to camp, he didn’t.   After two days he was picked up by the civil police…they ‘phoned Aldershot… Aldershot said they had made a mistake so the police let him go…six days passed and whilst he was out one day two military police called.…

Our group was marched to a rifle range for the day’s exercise.   My first two shots were dead centre, the officer in charge shouted “well done number 3”, me.   From then on I think i missed the entire target with the next four shots.

I was sent down to the Isle of Wight, to Freshwater, where an attempt was made to teach me boat handling.   I eventually achieved the standard!   Admiral Mountbatten will not be challenged!!

Memories of Golden Hill?
A group of nine of us on drill training, marching and all that stuff, with a drill NCOo some distance behind yelling orders.   Up came “this” particular order.   front row turned left, middle row turned right whilst the rear row apparently got it right and about turned!   But they were nearest.   Unhappy NCO!

Down the road in the town or Yarmouth all the WT boats were moored, midstream, in what we called “The Trots”.   We sculled out to the vessels in dinghies and started our day.   Except, once we had a capsize in mid river.   we all went overboard, In full battledress so not very clever, and I must admit, seriously ashamed, that I got out of the mess via the head of another soldier who I pushed under to save myself.   [As I write, in 2010, I am not proud of that little effort.]

On guard, I remember one night when the english sky was crammed full of stars.

The wash house arrangements:   communal and cold water supposedly to harden us up.   All it did for me was make me even more miserable.

Having started at Aldershot, Blenheim Barracks and then moved to Freshwater, Golden hill, i was eventually returned to Bordon, in Hampshire, to prepare for my overseas posting.

One macabre memory from Bordon.   A group of us, quite a few, had to attend the medical centre for our overseas jabs.   The doctor lined us up, we bared our arms and bang bang bang bang…..he just went down the line with one syringe and an unchanged needle and the needle became blunter and blunter as he proceeded, not always going in at the first attempt!  If i remember rightly, number 6 in the line passed out cold.   And whatever it was that this monster shoved into us, we were all quite ill for a couple of days afterwards. 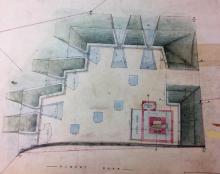