I have not discussed the scheme to any extent with Prof. Forster, but I gather that the Education Committee feel that such a hostel would do these older boys a lot of good; it would get them away from their families and make them more self reliant; it would enable a mild form of discipline to be administered – a very  difficult thing in the main camp; it would get them away from the  overwhelming majority of adults amongst whom they live at present and enable them to develop their own characteristics more easily and encourage a greater amount of initiative and self expression amongst the more shy and sensitive. Also it would be much easier to control them and direct them in different (morally and mentally) ways than if they were spread all over the camp as at present. It would, of course, be necessary to have a small staff of resident adults living there, and, having briefly explained the scheme, Prof. Forster said they hoped perhaps Mr Dormer, Prof. Brown, Dr Loam (a young New Zealand medical missionary) as M.O. would consent to go, and the Committee was anxious to have a married couple there and they wondered if Yvonne and I would consider it.  He showed me a rough plan of the building – there are some big rooms which would serve as dormitories and some smaller rooms which would be used by the staff: Y and I would have a small room to ourselves!

Being somewhat cautious by nature, I did not accept Prof. Forster’s proposal straight away, but said I would talk it over with Y. However, it did not take us long to decide and next morning we went to Mr F to say we would be glad to go. Think of it; a room entirely to ourselves!  I think we would have moved anywhere in the camp, by now, for such a reason – and this is not because we quarrel with the others in our room, in fact we all really get on very well together. But to be on our own and in addition, to be away from the main body of the camp, living in that isolated little block over looking the bay and the islands to the south and west, really sounds too good to be true. In addition it would give us a definite job and an interest here which would make time pass more quickly. We should have our own garden too. What our duties would be I do not yet know.

At present Y is the only woman who has been asked to go. Dr Loam has spoken to me about it. At present he lives in the M.O.s’ mess in the old Leprosarium (B/A) and is a little loathe to leave it as, there, he keeps in touch with the medical part of his work; with the discussions, theories, cases etc. that emanate from the other M.O.s and their dealings at the hospital. He would like to visit the hostel each day in case anyone needs attention. I think, however, that isolated as we should be, it is essential to have a resident M.O. in case of emergency, and if he is not prepared to live there I would suggest Dr Thomas and his wife be asked to consider it. Dr Thomas is another young medical missionary – his sphere of work was at Cheung Chau, in Hong Kong waters – and he was a member of the HK Football Club, where I got to know him. I think too it would be better to have two women than one all on her own, and I should think Mrs Thomas and Y are much the same age. Y’s one misgiving is that, not being a very keen or experienced cook, she will be expected to superintend the cooking! However, it is quite likely that the Jap military authorities will refuse permission and the whole scheme will then fall through. Prof. Forster is hopeful though, and says Mr Hatori seems to be quite in favour of it.

When, in the early days of this camp, the bachelors, then occupying the Prep School and Masters’ House, were ordered to move, they stripped the buildings of everything movable – electric wiring, basins, brackets  etc.  This would have to be put right, of course, and cooking facilities installed before we could move in. Well, it gives us something to think about at present and perhaps we shall be repatriated before we actually have time to move in! In that case we would not mind at all.

On Saturday 8th of this month, the remaining British in town were all brought into camp. These included people like Dr Selwyne-Clarke and family and other Govt medical officers who had been carrying on with their duties at the French Convent; Sanitary Inspectors; Gas works officials, Dairy Farm officers etc. There were 19 of them altogether. (I presume this includes Dr Mackie, his Chinese concubine and their baby! – a disgraceful fact. Mrs Mackie was evacuated to Australia nearly three years ago. What a fool he is; he is a Govt Doctor – a malariologist – and must have ruined his career as a civil servant).

Dr Selwyn-Clarke was allowed to bring in his wife and child and then he was taken away under open arrest. There have been a number of arrests recently and we understand, from these lately interned people, that there is a big spy purge in progress in town and that is really the reason that they have been interned. Four weeks ago last Tuesday I walked downstairs and met some excited person who said, “The Japs have just brought Sir Vandeleur Grayburn (Head of Hong Kong Bank) to the prison”.

I ran to the fence and sure enough, there were two Europeans, standing handcuffed, one of them in a shirt and grey shorts certainly looking very much like Sir Vandeleur, and the other in long trousers and a shirt. 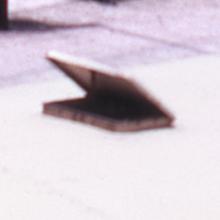