The diary was transcribed from the original by Alison Gerrard.

George Gerrard was born in Fraserburgh (Aberdeenshire) in 1894. He was the fifth child in a family of seven. His father was the Rev. George Gerrard and his mother Mrs Helen Gerrard. The family moved to Kirkwall in the Orkneys in 1896. In 1903 they moved to Greenock where George lived for the next eleven years, completing his education at Mearns Street School.

In 1913 the family moved to Walkerburn, a village in Peebleshire, but George stayed on in Greenock. He worked in Greenock Library and in Scott’s Shipyard.

On 9th July 1914 he joined the Taikoo Dockyard and Engineering Company. He returned to Greenock to marry Nell Henderson in 1921. They both returned to Hong Kong until the Japanese invasion. They had no family. At the time of the invasion he was Chief Clerk, in charge of the General Office, Stores Office and Timekeeping Office.

Following the relief of Hong Kong in 1945 he was repatriated on a hospital ship which docked in Liverpool towards the end of 1945. He weighed approximately 6.5 stone, a loss of 10 stone over the internment period. After recuperation he returned to Hong Kong and retired in 1951. He returned to Glasgow and was employed by RB Stirling and Co Ltd. He was made redundant in 1962 and moved shortly afterwards to Whitley Bay. He died around 1970.

I have little further information on George Gerrard. Despite there being seven in the family few of them had children and the family was spread around Scotland. My Great Aunt Ella was probably closest to him, hence her having the diaries. My grandfather Andrew Gerrard also stayed in Greenock and also worked in the Far East. He was in Shanghai in 1939 but got out before the Japanese arrived. My father, also George, who served in the 1st Field Survey Regiment Royal Artillery in Burma during the war felt that that was always a source of great bitterness to him and he was at least partly estranged from the rest of the family. I don’t remember ever meeting him, I was five when he moved to Whitley Bay from Glasgow so I may have done as a small child.

You will see from the diary that he did not keep in good health in the camp and he lost more than half his bodyweight, from sixteen and a half stone to six and a half. This despite being quartermaster for his block so he does not seem to have taken advantage of this position. You will also see from the entries his love for his wife and it is very poignant that having survived the war he was not reunited with her. I do not know the reason or anything beyond the barest of facts. Nell was evacuated to Australia before the invasion and then back to Scotland. She later moved to Canada and that is the last I know of her. The diary indicates that she wrote to him and certainly at the time of liberation he gives no indication that he did not expect to be going back to him.

The diary is also frustrating in that it does not commence until January 1943, a year  after internment began and ends abruptly on 19th August 1945 right on the point of liberation where a few more entries would have been very informative. It may be that a first volume has gone missing or it may simply be that he did not bother at first but at the beginning of another year decided to start.

The Diary was painstakingly transcribed from the original notes by my wife Alison and unfortunately will contain quite a few errors as it was written in a neat but very small hand in pencil over fifty years before being transcribed. In particular a lot of the names may be incorrect, so any corrections will be gratefully received.

Finally there are some abbreviations as the diary is as exact a transcript as Alison could manage. DBB is Davie Bone and JF is John Finnie. They were his best friends in the Camp. I think they were colleagues from the Taikoo Dockyard and John Finnie was also from Greenock. CCR is Charles Collingwood Roberts, HS is Hugh Smith and NM is Norman Dunn Meffan.

Our 22nd Wedding Anniversary my dearest, another of our years has past and still we are far from each other but that wonderful thing Hope lives eternally with us and we do trust that our day of reunion is not far distant. First of all release from this detention so that we can have cable and letter communications with each other.

This time last year we had hopes that it couldn't be so very long but it has lasted longer than we anticipated, however dear I feel very confidant that our…

There isn't very much new to tell, my voice is still a lost number and tho' I have a gargle and some cough mixture there appears to be little of an improvement.

D.B.B. and I were down at J.Fs' place last night for a mug of coffee and a talk over the dockyards probabilities and the hope of reconstruction. He gave us a packet of Royal Leaf cigarettes each when we came away. We have to be in the region of our own block by 8 o'clock each…

A huge number of parcels were distributed last Monday and I was very fortunate getting five in all. Bone got two, Meffin two and McIntyre two and most of the parcels were from our yard people.

Andrew - both were Taikoo Dock as you surmised. Bio on Davie recently posted on Gwulo. John Finnie was the Manager of the dockyard both before and after the war.

Probate records He died 23 December 1966.  His address then was 7 Esplanade Whitley Bay Northumberland. Will was sealed 28 April 1967

The ages cannot be correct and must be a mistransciption. George Gerrard was born circa 1890. The ages were most likely 30 and 34  respectively 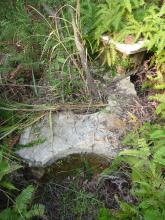