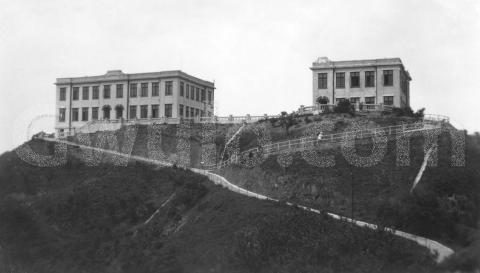 Where: Any ideas? There's a sign where the path splits left and right, but it is too far away to read. And though I don't recognise the location this is the highest land in the neighborhood, so maybe somewhere around the Peak?

Please leave a comment below if you can identify where this photo was taken.

What: Here's a closer view of the two buildings: 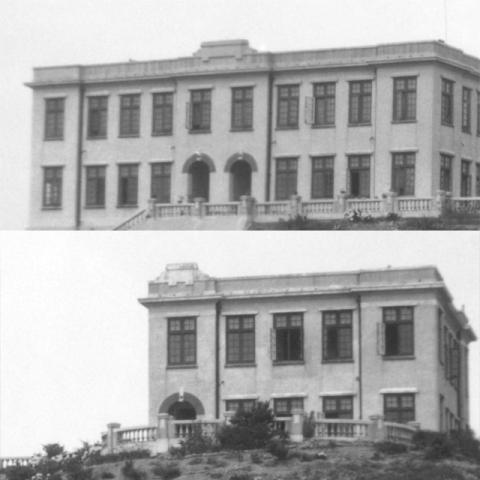 Both buildings share the same design, so they'd have been designed by the same architect, and probably built around the same time.

The space between the two buildings is just the right size to fit the missing half of the right-hand building. I wonder if that got built later?

Who: There's only one person to be seen: 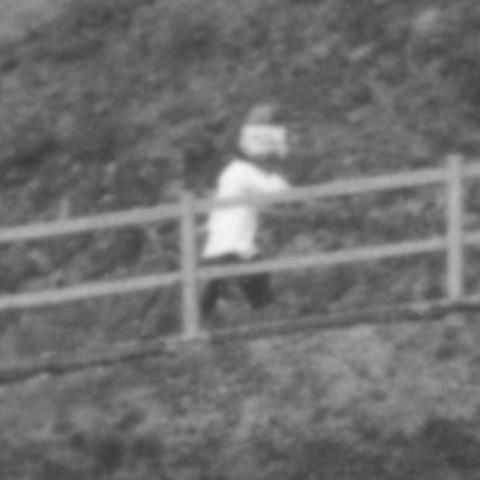 Though we can't see their face as they're covering it with a newspaper or something similar. Are they hiding from the sun or the photographer?

When: I've guessed 1928 for the date, as that's the date we've identified for some of the other photos in the same album.

PS If any readers with architectural abilities are reading, does the style of the buildings let you estimate when they were built?

Is there no problem with copyright for reproducing maps?

re: Copyright for maps?

I believe that in Hong Kong the copyright of the map expires 50 years after publication, so since we're generally looking at old maps I don't expect any problem. It's always good to quote the source to make it clear we're not trying to claim it is owned by Gwulo.

Thanks to Tony, who writes:

I think these could be the original Mount Austin flats on the Peak above the Peak Tram Station.

Here's the hill where the Mount Austin flats were built: 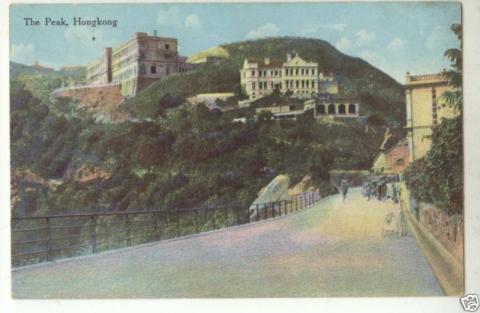 It's the right sort of shape, but unfortunately it wasn't built on until after World War 2, so it wasn't the site of the buildings in this 1920s photo.

You can see more photos of the hill at:

If it's only for the turn of the path I would have suggested Findlay Path. There are still a bit of those old foundation or knocked down pillars up there. But I am not faimiliar with the Peak area. Better pick annelisec's brain on this.

Thanks Moddsey, that's a match.

I've got a similar view:

Fortunately it is a very sharp photo so we can zoom in to see those buildings: 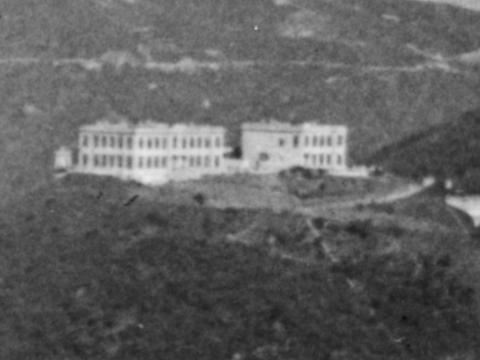 A good match with the original photo, thanks!