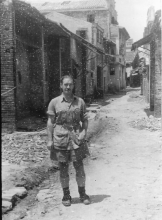 “For 18 months this officer

“For 18 months this officer was in command of the BAAG forward post in the Samfou area and for about six of these months his post was isolated behind the enemy lines.  He was responsible for the escape and evasion and intelligence network in the large area from Hongkong east to Kwangchowwan including Hainan Island.

During this period, enemy advances twice compelled him to move his HQs and re-set his evasion lines; yet in spite of this Captain McEwan was able to rescue and pass through the enemy lines over 20 American airmen, some of whom were rescued from but a few miles from Hongkong.  In 1944 it was learned that some Allied POWs had escaped from a camp in Hainan Island, and were free in the jungle. Captain McEwan was given the job of making contact with these Dutch and Australian officers and effecting their rescue.  This meant passing through the strongly enemy-held Luichow Peninsula and penetrating right to the centre of the almost completely unknown Island of Hainan. Early in 1945 this was accomplished and a written communication was received from a Dutch officer giving all the names of the Dutch and Australian officers and information as to the P/W Camp.

Plans for their rescue [Operation Man Friday] were drawn up by Capt. McEwan and were already in operation and had passed the initial and most difficult stage when the whole operation had to be handed over to the Americans.

Under the difficult and primitive conditions prevailing in his area, Capt. McEwan’s achievements were outstanding and the high standard of service could only be maintained by careful planning and continual preparedness for any eventuality.”  (signed) L T Ride, Colonel.

I believe that McEwan was the SOE agent from whom Captain “Potato” Jones, (O.C. A Coy 2 Royal Scots), was waiting to receive a report just before the Japanese attacked his position on the Shing Mun Redoubt on the night of 9 Dec 1941. Jones had just finished receiving the report of his alleged recce patrol of the Shing Mun Valley from 2/Lt Thomson, and he instructed the latter to remain in the Command Post as he wanted Thomson to hear what McEwan had to say.

Also, I understand that it was to McEwan whom R E Jones handed his diary many years after the war, which David Bellis is serialising on this website on a daily basis.

Thanks to Alison for sharing her father's wartime diary with us. It is online at https://gwulo.com/node/45104

Extract from 'Report on visit

Extract from 'Report on visit to China  28th June -  14th September, 1944' by Major B K 'Bertie' Blount, Intelligence Corps.:
... "12th-16th August 1944.
While I was at Yanping, I stayed in the hospital with Captain Raymond Lee, but had my meals in the BAAG Mess.
The British personnel at Yanping consisted of Major McEwan, Captain White and Sgt Hinchcliffe, the wireless operator.  Captain Raymond Lee, a Canadian born Chinese, was in charge of the hospital, and the BAAG employed a number of first rate Chinese confidential translators and clerks to deal with the intelligence which was coming in all the time.  I spent my time in Yanping getting to know the staff, learning about their work, and in dealing for Gill-Davies with a number of points concerning administration and operations.
Major McEwan was on the best of terms with the Chinese in Yanping, and particularly with the orphans .  These boys were housed in the same large building as the hospital, which McEwan had frequent occasion to visit.  He was always greeted with salutes or scraps of English which he had taught them, and generally with both.
The Yanping office was a busy one, since a great many links radiated from it, and intelligence was coming in all the time from Canton, Hongkong, Macau and many other places.  Until recently, the office was located at Sam Fou, but had to retire to Yanping when  the Japanese advanced.  Since many of the links were  through cut-outs, some of them were lost, and while I was there they were being re-established, particularly a rather difficult one with Hainan...."
This photo of Colin McEwan was taken in Yanping by Major Blount when he passed through Yanping in August 1944 on his way to an SOE mission concerning the  Patpo Mines.  He also photographed the house where BAAG had the top floor as the AHQ office.
From Colin's memoir:  "Our real address was a honey - 'behind the temple containing the tablets of the clan of Wong in the lane of the dragon of longevity in the city of inexpensive benevolence' although to our practical minded Cantonese neighbours it was I am afraid simply 'the English army office'."

Many thanks for this!!

Gee, emride, you are a treasure trove of information! 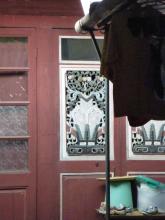