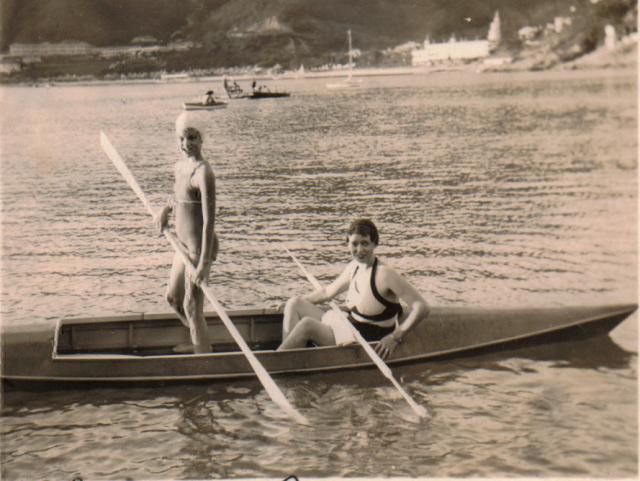 Another photo taken in Repulse Bay with Eucliffe Castle out of focus in the background. I don't know if PB17 can be discerned. The photo shows Veronica ("Ronnie") Walker in a canoe called The Leaf with her mother. The photo is labelled as taken in 1939 and was sent to the wife and children of my uncle, Leslie Warren, after their 1938 departure for England. The Walkers and Warrens were neighbours in Broadwood Road. The date has been added in a different hand to Veronica Walker's own note on the back of the photo.

Eucliffe is out of sight to the left of this photo. The building with the turret is the Lido:

Thanks, David. My mistake. I've deleted the tag referring to Eucliffe.

I guess Veronica's mother was

I guess Veronica's mother was Doris Walker, interned in Stanley Camp. She is noted as the wife of Vernon Walker, and a Vernon Walker was Veronica's father. So it seems likely, though I don't yet have firm evidence that the two Vernon Walkers are the same person.

Having thought about it that must be my Gran (Veronica) in the boat with her mother. The date’s match up, Gran would have been 12, and I think that is definitely her mother Doris Walker.

Douglas, Thank you for verifying the relationship between Doris and Veronica Walker. I have another shot of Veronica at Stanley Beach. If David thinks they are appropriate to Gwulo, I can upload a photo of your great-grandfather with Veronica and of Doris with Veronica in Australia - perhaps when they were reunited. Otherwise I can mail you scans. By the way, are you also related to Siobhan Bland Daiko?

I think I know the photo you mean, I emailed it to David so that he could see a few more of Doris and decide if that was her in the boat. It's a spectacular photo when you think that Doris and Vernon have been on a bowl of rice a day for 4 years, and Gran looks so happy. If you have a different photo than the one I'm thinking of, than I would be very excited to see it as well as the other one of her at at Stanley Beach!

Yes, Siobhan is my aunt, her brother Diarmuid is my dad!

Walkers after the war

re: Walkers after the war

Yes please Jill, any photos of people with a Hong Kong connection we've talked about are good to see here, even if they weren't taken in Hong Kong.

I've uploaded the two photos of Vernon and Doris Walker with Veronica, taken in the Blue Mountains, Easter 1946. Could you tell us anything about the book that she is holding and about her aunt, the author, and whether it is true that Veronica too became a writer? Also do you know whether Vernon was related to HW Walker and Tomé Walker, who lived at Brinkilly, 15 Broadwood Road pre-1920 and maybe afterwards? I'll upload the photo of Vernonica at Stanley Beach and an earlier one where she is serving a customer at a charity bazaar that she organized, no doubt with Doris's help, who is looking very glamorous here.

Apologies that it's taken so long to respond; I am still doing research on my family and have not got all the information I would like yet.

I am afraid I don't know much about the book Mirage, except that it was probably written by one of Doris' sisters, Phyllis or Gertrude Muir in this photo, because Vernon had no sisters (according to the 1901 and 1911 census). My aunt Siobhan may know more.

Do you know any more about HW and Tomé Walker? I don't know the precise circumstances that led Vernon to come to Hong Kong, when he met Doris, or when exactly she arrived in Hong Kong. They knew each other before he left for Hong Kong in '21, as we have pictures of them courting during WWI in Southhampton, and he had moved there from Oldham before he left England as the passenger list shows.

I was hoping that it might be possible for you to email me your photos, as they are really fantastic. Is there a way for me to send you my email address?

By all means send me your email address via David.

I'm afraid I don't know anything about HW and Tomé Walker, except that, with my grandfather, CE Warren, they were among the earliest residents of Broadwood Road when the houses were first built in around 1916. I'm trying to build up a portrait of the first owner occupiers. You will find a grave inscription for the 19/02/01 plot in Patricia Lim's data base:  "In loving memory of Captain Henry Walter Walker died 9 February 1940 aged 73 years/ Mrs Tomi Walker died 25th April 1944." Although Walker is a very common name, it seems strange that there were two Walker families in Broadwood Road and perhaps not unlikely that there might have been  a family connection. I also wonder about Alexander Thomson Walker who died on 27th July 1913 in his 40th year. He would have been in the Public Works Department and the same time as my grandfather. His grave bears the CEW & Co. mark. The Walker family may well have a long Hong Kong pedigree.

The Walkers and the Warrens were close friends. I was interested to discover that the The Hong Kong Tramways Company was the final pre-war purchaser of 21 Broadwood Road, where my uncle, Leslie Warren lived until 1938, when his wife and children left for England. I wonder whether Vernon Walker had anything to do with that transaction and whether Leslie continued to live in the house as a tenant until he too left in 1941. We can't know.

Look forward to hearing from you.

Sadly Henry has no family

Sadly Henry has no family connection to Vernon Walker -