We moved flats last weekend, so after 25 years living in and around Kennedy Town on Hong Kong island, it's time to get to know Kowloon better. The new flat looks out over the old Kai Tak Airport site, so let me show you the view, and a few points of interest.

That photo looks northeast along Prince Edward Road East, with old Kai Tak on its right. Despite all the construction underway on the airport site, traces of its history remain. The road I've marked (A) above is an example - it's named Concorde Road.

This view looking south towards Hong Kong island gives the best idea of the size of the site. It's mostly just an expanse of flat ground, but the old runway (B) is still clear to see. There is a better selection of landmarks if we turn further to the right.

(C) is the first in this view, a small cluster of buildings that includes a curved Nissen-type hut, and what looks a small aircraft hangar. The modern map marks them as "HK Aviation Club". You can see them more clearly at the bottom-right of this 1996 view: 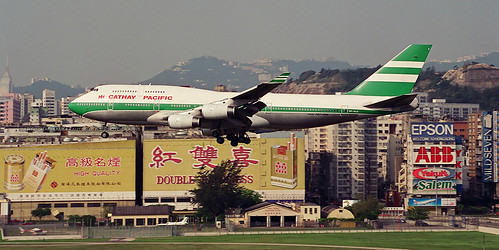 (D) isn't a specific building, but marks the height limit that applied when the airport was in use. The taller buildings date from after the airport closed in 1998, showing how much development there has been over the last 20 years.

(F) marks where the Kai Tak Nullah disappears underground, before reappearing in a channel that ran across the apron and emptied out into the strip of water between the runway and the mainland. That water used to stink - when you flew into Kai Tak the smell of the nullah was a sure sign you'd landed. So it's been a pleasant surprise to find how much the nullah has changed.

When we first came to look at flats here, I got a glimpse of the middle section of the nullah from the top deck of the bus we were on, and noticed some white birds there.

I assumed the birds were fake, installed to make the area look a bit prettier. But when we walked over for a closer look, one of the "fake" birds got up and flew away!

The water still has a bit of a whiff about it, but is much better than before. It is certainly clean enough to have shoals of large fish in it, which explain the presence of the birds.

The project to improve the old nullah includes some re-branding (modern maps call it the Kai Tak River instead of Nullah), and a website. The Kai Tak River website's history page is worth a visit to see how the watercourse has changed its route over the years, and to learn how they keep it flowing during the dry season - spoiler: it involves sewage from Shatin!

(G) is the oldest item to note, and pre-dates the airport. The original shoreline ran near to the left carriageway of the modern highway, and overlooked a shallow bay. Kowloon City was on the right of the carriageway, so there was a steady traffic of boats visiting this area to transport goods and people. To make it easier to load and unload the boats, a long pier was built out into the bay, first from wood and then later from stone. It was known as the Lung Tsun Pier, or the Kowloon City Public Pier.

The pier was buried when the bay was reclaimed, but its remains were re-discovered after the airport was closed. The site of those remains is shown by the green rectangle of vegetation marked (G).

Those are some of the things I've noticed in the first week living here. What else should I look out for around this area?

Welcome to the dark side...

Permalink Submitted by philk on Sun, 2017-11-05 10:30.
The white birds are egrets. A very common sight in the NT. There's an area at the bottom of Wan Tau Lok Lane in Taipo where they famously nest. It was in the news earlier this year when Govt AFCD contractors trimmed the trees there, destroying nests and killing the nestlings.

San Po Kong was originally part of the old Airport. The airport perimeter was marked by Clearwater Bay Road, today's Choi Hung Road. The old runway 13/31 and the northwest extension over the nullah are today's Tai Shing and Tseuk Luk Streets. In San Po Kong, some of the street names are named after Chinese numerals. Across from San Po Kong is Diamond Hill. Dont know if the former RAF hangar and Japanese pillbox are still there.

Yes, over at the Airport site, only Concorde Road remains. But pre 1998, there were other streets named after aircraft used by Cathay Pacific e.g. dakota, convair, tristar etc.

Looking at all that open space are we really to believe that our Government cannot find sufficient for building affordable housing?

I see that the site of my various offices (1972 -1991) within the former premises of  Hong Kong Aircraft Engineering Co. (HAECO) still lies as vacant concrete and/or tarmac slabs. All this land could have provided additional housing over the past twenty years.

Congratulations on the move! This is one of my favorite parts of Hong Kong and, because of that, I stayed at the Regal Oriental a couple years ago. I have photos of the interior that show a lounge on the upper floors where guests could sit and look out the window at planes taking off and landing. That lounge is still there and doesn't look like it's been updated in decades, and I never saw anyone sitting there. The restaurants around Kowloon City are good and there's quite a dessert cafe scene there and two Islam Food restaurants. I also walked south toward Tokwanwan and found an apartment building that looked like a former air traffic control tower. I miss the old Hong Shuang Xi sign at the end of the runway and of course the checkerboard. I think it's still in Kowloon Tsai Park. Looking forward to the book!

Welcome to the Mainland !

The shot looking SW over the old airport is interesting. Below you looking towards the Oasis is the location of Kowloon City Field, where aviation really started with the arrival of Harry Abbott and the Abbott School of Aviation in 1925.

The MTR Kai Tak Station will be built right where Harry had his matshed hangars. You can see an MTR exit just in front of the Oasis.

The HKHAA want the MTR to make a display in the station to commemorate this historic site. We have plenty of old images that could be used. Your assistance would be welcomed.

The egrets you show in the Kai Tak River have only arrived in the past 5 or 6 weeks, as until about 2 months ago that area was a clutter of construction material. Once cleared, the birds came in.  They possibly come from a nesting area at the end of the old runway, where they have nested for some time now.  The fish have been there for some time now - you often see the locals fishing for them.

Interesting to compare your new photos with the those of the site of Kai Tak in the 1950s, especially an early 50s aerial shot of the apron showing the then Clearwater Bay Road around the perimeter and the runway extension across the roadway.

I am currently researching the case of the 71 CNAC/CATC planes that were grounded at Kai Tak from 1949 to 1952 during a tussle between the Nationalists and the Communists about their ownership.  Does anyone know where they were parked?  I would guess on the NE side of the apron, towards the RAF area.

I have added one more scan of the former HAECO premises at Kaitak. This is an aerial photo taken in 1989. The main road running across the picture is Prince Edward Road East and appears to show the site from where Gwulu has taken his new photos of the old airport site. Not sure whether it is one of the existing buildings in this picture or a new taller replacement.

The photos of the site of the

The photos of the site of the old airport are very interesting.  How 'Kowloon side' has changed since I lived there in 1927, when there were very few (if any) high rise flats.  The Peninsula was the highest building I can recall.

The HKHAA has archived material including 1949 newsprint and photographs of the impounded  aircraft and the story of the case, plus provide pointers to recent research held in the USA and UK.

There has been images of the aircraft parked without wings on this site, but I can no longer find them . They should be in the 1940s galleries

Thanks IDJ for the info about HKHAA's archives.  Presumably the abbreviation is for Hong Kong Historical Aircraft Association which is referred to elsewhere on Gwulo, but I cannot find any website or address for the association.

Thanks too to Moddsey for the photo which seems to show some of the planes in the background.  I guess this is one of those that IDJ refers to.  The aircraft were mostly Dakota and Skymaster transports.

The aircraft in the photograph on the right look as though they could be a few of the remaining impounded CNAC/CAT C46 Commandos, also included were Convair 240 airliners .All were eventually shipped out by sea via US aircraft carriers to California. At Kai Tak most were covered in a black preservative coating to protect them from the elements

Much research has already been done on the impounded aircraft, their background and history in great detail and is downloadable on PDFs here :-Pages 31-34 are pertinent

and via Air Britain Historians, Archive Journal, series "The Development of Commercial Aviation in China" . Parts 10-13 cover the impounded aircraft at Kai Tak.

These are not on-line, back numbers should be available from Air Britain via their website

This series uses  not previously accessed material gleened from the UK National Archives and give the UK/HK perspective.

A long and complicated legal case was conducted in HK's courts

A large number of closer photographs of the impounded aircraft at Kai Tak were accessible on the LIFE pictures web-site site, but access now seems to be severely limited. Searching on 'Hong Kong1949' in the search box used to bring them up.The defecting crews are here http://cnac.org/tlchan01.htm

Thanks for all the info about

Thanks for all the info about Kai Tak and its surroundings, and also for the name of that bird. Here are a few more I saw in the area on Saturday:

I've seen several people fishing from the bridges, and pulling out large fish so I don't know how long the river's fish population will last.

Thanks for the further leads IDJ.  The link concerning Chen and the 'defectors' is especially informative.

Yes, there was a long and complicated legal battle over ownership of the aircraft which is the focus of my research.  But it is useful to learn more about the planes and the situation at Kai Tak.