This is the building used as a hospital when the area was the Stanley Civilian Internment Camp during the Japanese occupation of Hong Kong, 1941-45. I've made a guess at it's location - I'm not sure if the wartime building is still standing or not.

Soon after internment, a three-storied building overlooking Tweed Bay was taken over as a hospital. This building had formerly housed single Indian warders of the prison. When it became a hospital, the internees named it Tweed Bay Hospital.

I found this account of an operation at Tweed Bay Hospital in a 1945 Australian newspaper and wondered if it might spark memories or comments:

HONG KONG, Sept. 7. - A major operation performed at the Stanley internment camp hospital here while the Japs were in control was a masterpiece, of medical ingenuity.

Professor K. H. Digby, former professor of surgery at Hong Kong University, performed the operation in the dingy theatre with improvised lighting. A mud wall was built outside the window of the theatre, and the mud was smoothed and highly polished until it reflected the sun's rays into the theatre.

After making a 'nine-inch abdominal incision, Professor Digby got another doctor to stand, over the patient, holding a polished sheet of tin. The tin reflected the sunshine from the mud wall on to the abdomen. Ahearn was on the table for four and three-quarter hours, the first three and a half hours with a spinal and local anaesthetic and the rest with chloroform. Another doctor performed a similar operation on another patient under similar conditions. The Japs, although they had it, refused to provide medical equipment for these and other operations, and old rags had to be used as dressings. The camp hospital got some drugs from the International Red Cross, but none from the Japs. The doctors made medicine for dysentery from a clay they found in the camp area. They also made a medicine' from the lagging (asbestos) from the camp boilers.

The staff at Tweed Bay Hospital Stanley were certainly wonderful. I understood that the building was originally quarters for (probably single) Indian or Asian staff members of the nearby Prison, but when the Japs attacked Hong Kong it was converted into a hospital for casualties.

On the ground floor there was an office, wards, operating theatre, and a small room which eventually housed an internee, Mr. Albert Frain, who sadly lost his senses and was looked after by a male nurse.

There were large wards on the first floor. All wards had real beds and bedding (including mosquito nets) - going to hospital was almost a luxury as we in the rest of the camp only had camp beds, with no mattresses, and only such other bedding as we'd been able to bring with us. The meals were cooked by the Sisters in a kitchen on the ground floor - and as the hospital was a small unit, they were much better cooked than up in the blocks, and sometimes had seasoning etc. which the Sisters had managed to bring with them from Queen Mary Hospital.

The Japanese daily supplied a small number of little bottles of milk mainly for the babies and toddlers throughout the camp, but a few of those bottles were allocated to the hospital and given to those patients most in need.

Instead of bedside lockers, there were 'Mimi Laus' - upended concrete blocks found around the camp as protection against bombs. (I can explain the reason for the name 'Mimi Lau' if any one doesn't know the story!).

The Sisters from the Government Hospitals lived on the top floor of the hospital, their beds squashed close together in the 3 rooms there, I think they probably had less space per person than any one else in the camp. Yet they always appeared on the wards in their pristine white uniforms and veils, and never looked like internees. Most of them had been brought to Stanley from their quarters in Queen Mary Hospital,so had the chance to bring some of their own possessions with them on the lorries that brought them.

To augment the staff at Tweed Bay, a number of other nurses in the camp often came and worked shifts on the wards, they also did the hospital laundry - a difficult job without much hot water and soap, no washing machines then!

The toilets were Asian i.e. you squatted over a small drain with your feet either side.

The Sisters and the doctors all had the same rations as the patients and we girls working in the office. Now it seems incredible that Prof Digby and the other doctors who had been doing operations in the morning, were sitting in the office feeding with us sedentery staff.

It was Professor Digby who attended my younger sister Mabel after she fell 16. ft. off a wall while she and I were gardening above a slope. It was getting dark and there was no electricity supply that day. In the hospital, he and others worked against the failing light, getting her fixed up with a makeshift Thompson splint, with 3 charcoal irons as counterweights.. she had displaced verebrae, a fractured wrist and heel, and a cracked rib.

Another clever makeshift invention was for a patient who had had an abdominal operation: the professor wanted to be able to inspect the incision daily without uncovering it, he devised a shield from an empty sardine tin in which a glass bottom had been fixed, and taped it over the incision.

There was no x-ray equipment at Tweed Bay H, but the Japs did from time to time arrange to take a few patients needing x-ray into the French Hospital in town for x-rays: the patients stayed the night there - and some used their time well by getting friendly staff to go to the shops and buy some provisions to take back to Stanley: most such patients were armed with shopping lists from internee friends and money for this, but it did lead to problems.

I should also mention that the Japs sometimes supplied oxygen cylinders: one of my friends died on the operating table because the oxygen supply had run out.

It was I think kaolin that was discovered in the camp precincts which became medicine for dysentery sufferers. 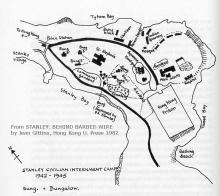 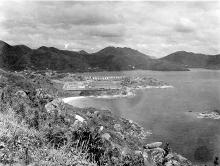 Raj!...especially.compared to UK at the time