I'm trying to trace one of my mother's cousins who was orphaned in 1930, when she was only 2 years old.  There were no other family members in HK, and she was allegedly adopted locally.  Was there any formal system for managing adoptions in HK then?  If so, was it government controlled, or organised by church or charity organisations, and might any records exist that I could examine when I next visit HK (probably next summer)?

re: Adoption in pre-war Hong Kong

The Fanling Babies Home website may be able to help. They write:

It looks as though they're focused on orphans from post-WW2, but they may also have some ideas about older orphans such as your mother's cousin.

I'll be interested to hear how your search turns out. If you find any other helpful resources, please could you let us know about them?

There appear to be a couple of Colonial Office files in the National Archives in London that may be particularly interesting for me, judging from when the issue with which they deal seems to have arisen.  I'll be in London in January and plan to spend a little time in the Archives.  One file may be of more general interest, and I'll let you know what I find: CO129/537/12 - Status of step-children and adopted children

I promised to provide some notes about adoption after I had returned from doing some research in Hong Kong.  I hope this is of some use to others.

The legal position of non-Chinese children in the early part of the last century was set out in:

The ‘Hong Kong Charter’, issued in 1843 as the basis for colonial government, established the Executive and Legislative Councils, but ruled that local Ordinances could not contradict U.K. law.  Adoption was therefore subject to English Law, unless it had been amended by a local Ordinance.  Thus the prevailing English Law through most of the last century would have been the Adoption of Children Act 1926, as amended.

Pegg (1979) reports that, in 1930, it was made clear that the modifications of the law of England which obtained in the colony were those that arose from the necessity of preventing injustice to the various alien races established there if that law was applied unmodified.  In discussing the position of children in family law in Hong Kong, Pegg (1979; 1980) refers only to Ordinance no.4 of 1865, amended by Ordinance no. 13 of 1929, both of which dealt only with the implementation of traditional Chinese law, and which remained in force until revised by a further Ordinance in 1956.

Evans (1980) discussed the law of succession in Hong Kong, and states that “expatriates with a place of origin outside Hong Kong have long been assumed to remain domiciled in their country of origin.”  The succession to the estate of an orphan’s parents would, therefore, have been subject to prevailing English law, the Wills Act of 1837, as amended.

Ordinance no. 1 of 1844 provided for the deposit of wills at the Land Office, for delivery ultimately to the executor (Fraser, vol.1, 11-20).  A few wills seem to have survived in the Public Records Office.  ‘The Hong Kong Weekly Press and China Overland Trade Report’ seems to have often (but not necessarily comprehensively) reported when wills had been probated in Hong Kong, or wills had been probated in the U.K. but referred to property in Hong Kong.  These reports appeared some months, sometimes a year or more after the death of the individual.

In line with Ordinance 15 of 1908, the ‘Widows and Orphans Ordinance,’ an orphan of a government employee was entitled to a pension, if their parent had been entitled.  For example for a female orphan, the pension would be paid until she was married or reached the age of 21, whichever came first.  The Directors of the scheme were authorised to appoint someone to receive the pension on behalf of the orphan.

Details of the actual pensions that were being paid can be found in:

In 1892, and possibly earlier, there was an institution in HK known as the Diocesan School and Orphanage.  HK Ordinance no.3 of 1892 assigned authority to the Chairman of its Committee (Fraser, vol.1, 353-354).  The ‘Hong Kong and Shanghai Hong List’ 1935 lists a Diocesan Boys School (no address given), and a Diocesan Girls School, King’s Park, Kowloon.  The Diocesan Home and Orphanage accepted boys and girls.  Its records were destroyed during the Japanese occupation

St Paul's Home for Girls, founded by "The Catholic French Sisters of St. Paul de Chartres" was one of the first orphanages established.  St.Paul’s Institution, an orphanage, day and boarding school was in Causeway Bay, under the auspices of the ‘Asile de le Sainte Enfance.’  It closed to new admissions in the 1960s.  The present school is in Leighton Road.

An Anglican Diocesan orphanage was established, but not until in 1937 at Taipo.  This still exists, although was re-named St. Christopher's Home after the war.

Victoria Home and Orphanage was merged with Diocesan Girls School in 1936.

I was interested only in a female child, born to British parents and orphaned in 1930.  Others may find more information scattered in a number of books which, like the texts mentioned earlier, can be consulted in Hong Kong Central Library:

Adoption in the early 1930s

In the book 'Let My Heart Be Broken' by Richard Gehman, Mildred Dibden is quoted as saying, 'In those days (early 30s) only the Roman Catholics were doing anything for abandoned babies... They had 2 homes for abandoned children, and they had many more than they could cope with. Babies were dying... in the streets.'  This was her perception of things when she embarked on her life's work to take in abandoned babies in 1936 (The Fanling Babies' Home and in 1952  The Shatin Babies' Home).

Orphanages at the start of the war

In her War Diary, Mildred Dibden mentions the following orphanages:

The CMS Rural Orphanage, Taipo.  Was this the Anglican Diocesan Orphanage renamed St Christopher’s after the war, founded 1935?

The Kowloon Foundling Home.  I think this must be new Victoria Home and Orphanage built in 1936 (CMS).

In The Yip Family of Amah Rock (Jill Doggett), as well as those above she mentions:

The Roman Catholic Foundling Home – This seems to have been started in 1845 by the Sisters of St Paul in Marine lots 23 & 24 Wanchai, St Paul's Home for Girls.  When in 1915 they moved to Causeway Bay did this become St Paul's Institution, an orphanage, day and boarding school (see imsij comment above)?  Or was St Paul's a second Home?

There were also those orphanages mentioned by David in Comment #1 above. Some of them are post-war start-ups though. 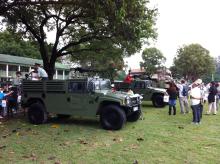