I heard stories from some of the "old girls" who would occasionally pass through the Helena May that in the 1960s and 1970's they would go to their office jobs by walking to the West Wing along Lower Albert Road, take the lift from what is the 6th or 7th floor down to the entrance on Battery Path to go to work in town.   At lunch, they made the return trip, where lunch was served in the ballroom of the Helena May.  And after, they returned to their work. 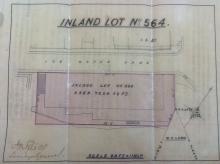 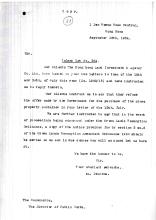 the wooded Battery Path is to be destroyed ...

" The West Wing, which is of low historical significance and architectural merit, will be demolished to make way for commercial development."

I understand that the lot extends all the way up to Battery Path (actually all the way to Queen's Road) and the greenery would be destroyed. 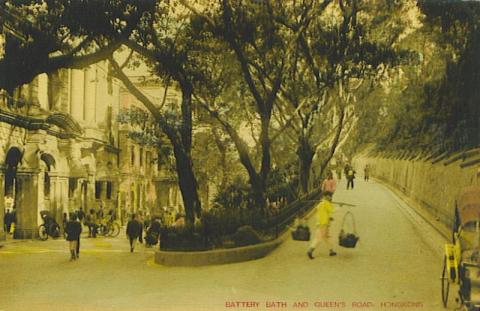 Hi Annelise, I don't think there's any plan to demolish Battery Path or cut down the trees. The government will convert some of the site into a garden, and reopen it to public access. The western part will be redeveloped into offices. The government actually did a great job hiring conservation architects Purcell Miller Tritton to advise them on the whole of "government hill". Their detailed report is here: http://www.heritage.gov.hk/en/conserve/centraloffice.htm

This has to be rezoned before it can be sold.  To maximize the sale price, Govenment will allow the entire lot, up to (though perhaps not including) Battery Path to be sold.  The whole lot can then be excavated for a massive new building to be put it.  Notwithstanding the architects report that advises otherwise, there is no way they will restrict the footprint of the new development to the current West Wing building or keep to the existing heights.

The article below from 4 years ago, show what is really planned.  The only thing that is different is that there would be 2 towers, insead of 3.

Three 70-storey towers providing 5.4 million square feet of office space could be built on a podium at the site of the Central Government Offices if the land goes into private hands and is developed to its full potential, harbour activists warn.

John Bowden, chairman of Save Our Shorelines, said the city would either have a three-tower development on Lower Albert Road that would be taller than The Peak, or four 50-storey towers which would create a wall effect, altering air flow and blocking the views of Mid-Levels residents.

He described the group's estimate as conservative, since developers could easily boost density by increasing the plot ratio.

'The [Central Government Offices] site is currently covered to less than 10 per cent of its potential,' Mr Bowden said, adding that the site had no height restriction, while ridge-line protection was non-binding. Ridge-line protection refers to the recommendation that views to the ridges and peaks be partly building-free.

Officials have so far refused to discuss the future of the site if the government moves its headquarters to Tamar. However, officials suggested last summer that selling the site would cover Tamar's development cost.

The harbour group believed a podium would likely be built in any office tower development because it would create retail rental space.

According to a government-commissioned report on the development potential of the offices' West Wing, released two months ago, there was retail potential if the site was used for commercial purposes. The report also said it was possible for developers to increase the site's density and plot ratio.

It warns that moving the headquarters to Tamar and selling the Central Government Offices' land to the private sector may create public uncertainty in governance.

'The Government Hill represents the classic geomantic form with the government [offices] and Government House centrally located on a prominent rise with a mountain behind, a green dragon [the Flagstaff House Museum of Teaware] in the east and a white tiger [the Central Police Station] in the west and the curve of the bay below,' it says.

But Tamar was on reclaimed land, which was 'unstable' in fung shui terms and had none of the natural supporting elements.

I remember that report. The idea of three 70 story buildings was rather loosely based on the theory there would be no restrictions imposed on the site.

The government doesn't plan to sell the whole site. This is what development secretary Carrie Lam said in October:

We decided that West Wing could give way to some commercial development in the heart of Central. But we will be extremely careful in planning the use of the West Wing site. You would realise that actually the West Wing site is a pretty large footprint spanning Ice House Street, Queen’s Road Central as well as Lower Albert Road. So the inclination is any new building will be very close to Ice House Street rather than on Lower Albert Road because Lower Albert Road together with the Government House and the cluster nearby should be very much preserved as low-rise, very green and vegetated, that sort of development for public enjoyment. I cannot tell you exactly the planning parameters for West Wing because we have just started to work on it. But I can assure you that we will bear in mind the recommendations in the heritage appraisal and the very important significance of this site.

No one will bid then

Then no developer will bid on the land.  Already with the Murray Building they have had to back off and make the site trasferable, the lease for at least 50 years, and the Government did not retain ownership of the land as we were originally told.  And that is for a remodel into a hotel, not a new building.   The smart thing would have been to redevop the Murray Building as high as Citibank instead of building Tamar - but they had to have a harbourfront "icon" - and put half of Government Hill on the block to pay for it.

I admire Carrie Lam, but even she cannot argue with the need to maximize profit.  Unless they ignore the historical report, they will not get the money they need to cover the costs of Tamar.  There WILL be a podium at the Ice House street side, because that is how you put in retail.   It will be a repeat of the retail arcade along Kowloon Park.

So again, I say, kiss Battery Path and it's low rise character - and it's trees, goodbye.  It will be a ghastly shopping arcade.  (Unless we keep exposing this boondoggle and refuse to allow back-room deals)

Why sell the family jewels ?

The real question is what Government in its right mind sells off the most valuable piece of property in the heart of town to developers that has masses of history (this is where the Murray Battery was) when it could put it to public use?

Why sell one of the Crown Jewels that the Government is supposed to keep in trust for the public good - much needed open space - at all.  Once it is gone, it is gone forever.

"... such development of the Battery Path and Garden Road area would be vandalistic commercialization of what should be one of the most beautiful parts of Hong Kong. (Applause)."

Hi Moddsey, Can you tell

Can you tell me the source of this photo? And how did you find out that the photo was taken in the 1910s?

re: And Bad Fung Shui too

One of my friends and his wife who are into Fung Shui had repeatedly mentioned to me that the existing piece of land of the Government Office and the Government House are in the best Fung Shui location of the island.  You have a hill/mountain at the back, with sheltered water (the harbour) right in front of you with a switch current running from Kap Sui Mun to Lei Yu Mun...... and the current is very important as it brings good fortune......

If all the offices are to be moved to the Tamar site then it would be worst for Hong Kong as reclaimed land just do not have good foundations...........

I have to admit I don't quite know what he is talking about.  I am sort of ignorant to Fung Shui.  Just bringing this up as another point of view.

from 'Names of Buildings'.

Hi, the West Wing was completed in 1959 according to the history commissioned by the government:

The West Wing was the final phase of the construction works. Working drawings were nearly complete by the end of 1956. The ground works for this wing were significantly more difficult than for the other wings as a huge retaining wall had to be built to shore up the slope down to Ice House Street. After this was built in February 1957, a contract for the demolition of the old PWD buildings was numbersigned and carried out in March. The wing was scheduled for completion at the end of 1958 and would provide 212,600sq ft of space and a car park for 125. However, the PWD Annual Reports record delays in May 1958 because of heavy rain meaning that the building was not completed until early 1959.

we can also add the Ice House Street part of West Wing replaced the original Ice House - presumably knocked down mid-1950s. It can still be seen in a 1949 aerial photo and marked on maps from 1950 according to the CGO research (pg 98-100)

the 1946 map shows the "original" Ice House on the opposite side of Ice House Lane.  Did it move across the street - or have we been mis-placing it ?

And where will they park

Where will they park?  What will it look like from the street ?  The model hides the actual intersection, though it does show an "artists" perception of a large fountain - or will it be a swimming pool for the new building ?

And will there be a walkway?  I ask because the air-ventilation folks say that these walkways cause a real problem stopping the breeze.

Why not just give the use of the land for 25 years, like the Hong Kong Club did.  There is no income now, but Government will be sure to need a building in Central by then.

Now where have I seen that

Now where have I seen promises of a "vertical green wall"  before ... ?

oh, yes - on the Kowloon side 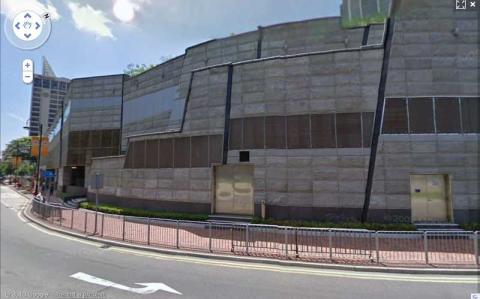 "Government Hill" is Not For Sale

I'll be presenting all the historical aspects of Murray Battery and the Ice House at a Press Conference Monday 25 Oct, with others concerned with the theft by Government of this Community zoned area for sale to a developer.  Our position is that the community needs all the buildings, as well as the open space,  we do NOT need the additional traffic.

We need "Government Hill" or "Community Hill" - not "Developer Hill"- which is proposed to be hollowed out just like the Marine Police Headquarter Hill.

How is this better? 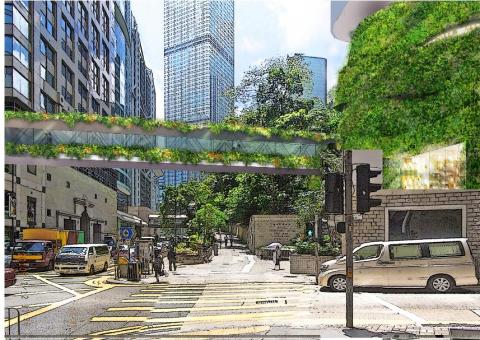 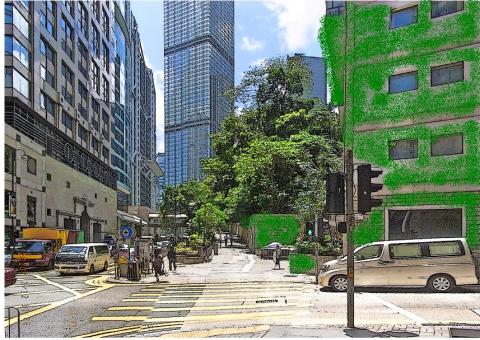 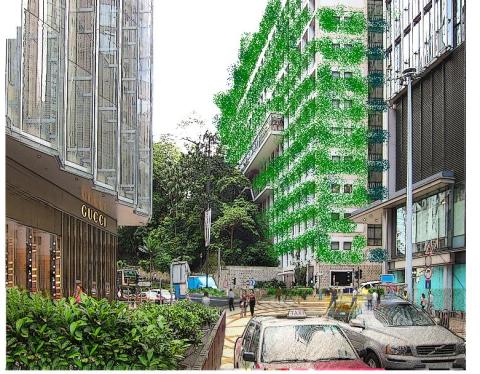 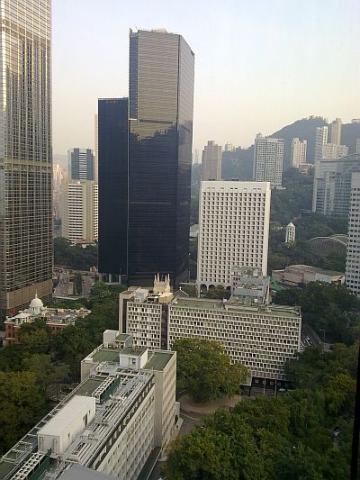 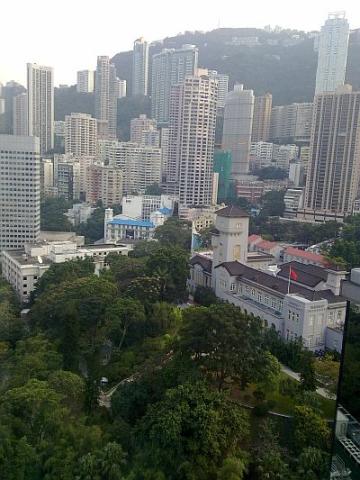 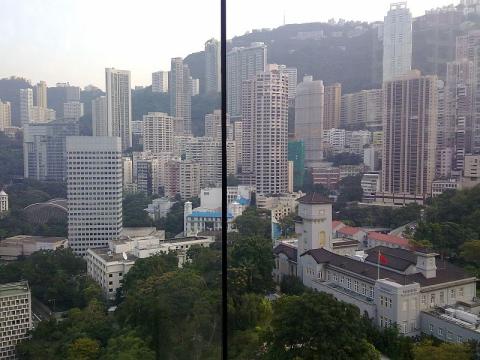