79 years ago tensions were high as war with Japan seemed inevitable. On December 8th, those fears were confirmed when Japanese planes attacked Kai Tak, and Japanese soldiers crossed the border into the New Territories. The fighting continued until the British surrendered on Christmas Day.

The end of the fighting marked the beginning of the Japanese occupation, a time of great hardship for Hong Kong's residents. They would have to endure for three years and eight months, until the Japanese surrendered in August 1945, and Hong Kong was liberated shortly afterwards.

Let the people who lived through these times tell you themselves.

We've collected several wartime diaries, and split them into their day-by-day accounts. Each day we send out an email message containing all the diary entries written on that day, 79 years ago.

How to sign up to receive the daily messages?

You'll see another screen that asks for your email address. Enter your details, hit the "Subscribe" button, then each day you'll receive an email message with today's diary entries.

It's free of charge, your details stay private, and you can unsubscribe at any time.

Here are sample extracts from the messages you'll receive:

What do previous subscribers to the Wartime Diaries say about them?

This is the 10th year we'll run this project. Here are comments from some of the readers who subscribed in previous years. They are located all around the world, and have many different reasons for subscribing:

Thank you to the subscribers for letting me post their feedback. Also thanks to everyone who has contributed diary material to this project and helped with typing and posting the material. Finally, special thanks to Alison, Barbara, Brian, and Tony, who got us started:

Are there more diaries out there?

I hope we can add more diaries, to get a broader range of viewpoints. If you know anyone who has family diaries covering Hong Kong between 1941-1945, please could you ask if they are willing to share them with us? 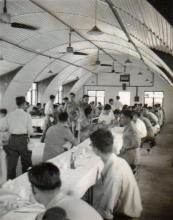